In a weak summer movie season, the election has become the hottest ticket around. 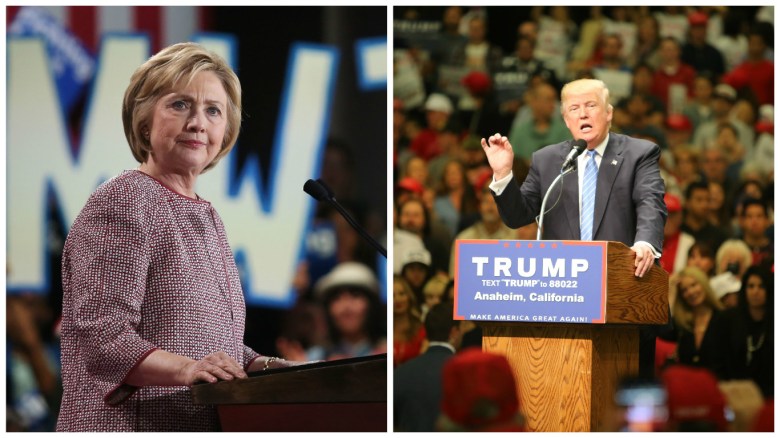 Last summer, the New York Times reported that Steven Spielberg and Barack Obama were discussing ways to “develop a narrative” after the president left office. While Obama’s late-game approval ratings could create a great crowd-pleaser, our current election season is more like something directed by Lars Von Trier  — deeply disturbing, but so sensationally realized it’s impossible to look away.

All political candidates define campaigns by the stories they choose to tell about themselves, and so we expect homilies that limn their humility, dedication, and leadership. This season, however, has devolved into an unnerving thrill ride rich with powerful images and unexpected twists, not to mention an absurd showdown between two characters who are more distinctive than any movie star working today.

The unlikely rise of Donald Trump has left all sides agape. Menacing supervillain to some, bold truth-teller to others, this “Cheeto Jesus” defines himself with assaultive bluster and outlandish physicality – a latter-day Daffy Duck with a hero complex. On “The Celebrity Apprentice,” the Trump phenomenon seemed like a tidy match with the trash-TV vernacular. But as the presumptive nominee for the country’s highest office, his features render at IMAX scale and he embodies the rage of right-wing extremism as a pure, orange id. And loathsome perspectives be damned, he can be fun to watch. Who doesn’t like a good monster movie?

Hillary Clinton has a more subtle screen presence. She’s tough as nails, but works hard to project benevolence. Her steely-eyed visage suggests the confidence of a seasoned warrior, an element that yields accusations of hubris. She’s the heroine who won’t be a victim, like the “final girl” in a horror film who slays the pursuing villain. (Bernie Sanders supporters may see the roles reversed.)

Regardless, the Clinton saga is not unlike the evolution of the Marvel Cinematic Universe with its developing dramas across multiple movies and a sea of characters. Her campaign marks the sequel to a franchise she launched with her 2008 bid, which was itself a spin-off from the tentpole created by her husband’s career.

These larger-than-life figures continue to polarize America — and their vocal followers round out the eclectic ensemble. The inanity of crass sentiments emanating from Trump rallies have generated more than one comparison to Mike Judge’s 2006 dystopian comedy “Idiocracy,” which envisions a future society comprised of utter morons who adhere to the empty declarations of a massively stupid president played by Terry Crews. But “Idiocracy” provides catharsis from the dumber modern sentiments by letting us laugh at them. By comparison, the election season plays out like a savage dark comedy. Meanwhile, audiences process this election through the same portals they use to experience movies. While Obama’s election was the first in the age of smartphones, today portable moving images and platform-agnostic viewers dominate the media landscape. (This convergence will be especially clear for anyone who streams the conventions on Twitter, as a new deal with CBS News allows.) This preponderance of images, text, and video turns viewers into movie editors: We define the images, and with them, the narrative.

Candidates do that, too. In one of the best scenes in “Weiner,” which chronicles Anthony Weiner’s disastrous 2013 mayoral campaign, he watches a clip of his combative interview on MSNBC, while his wife — Hillary Clinton aide Huma Abedin — sits nearby and rolls her eyes. One can imagine Clinton and Trump similarly taking stock of their own performances.

Make no mistake: The full scope of filmic power behind this election will come to fruition with the Republican National Convention, starting this week. The conventions always lean heavily on star power to drive up ratings and bolster their candidates’ standings with surprising results—four years ago, Kal Penn upstaged Clint Eastwood and an empty chair—but this time, the RNC’s central figure carries his own pop-culture weight. We know he’ll throw it around to put on a good show. But that just means the Clinton camp will have plenty of ammo when its turn arrives July 25.

The world will watch every moment. Unlike Oscar season, in which only an elite few cast their ballots at the end of the line, all of America gets to choose its favorite performance.

This may be the first interactive blockbuster, and audiences need one; we’re in the throes of the weakest summer movie season in recent memory. From “Warcraft” to “Independence Day: Resurgence,” most of the multiplexes’ CGI-heavy efforts have failed to generate much enthusiasm even when they succeed at the box office. (A lot of them don’t.) But the election campaigns aim to please on multiple, contradictory levels, which means everybody gets something: high stakes, conflict, surprise.

Beyond that, they captures the zeitgeist at every moment. The pile-up of tragedies around the country, and the ensuing debates, outstrip the outrageous extremes of this election season. They also forge a rare hybrid: This big-budget ride filled with ludicrous events also contains a prestige fall season drama weighted by the defining issues of our time.

We may as well view the election season as a movie, because that’s ultimately how the candidates see it. Rather than proceeding episodically, like television, this ritual adheres to a traditional three-act structure. It began with the heated primaries; the conventions that kick off this week are the explosive second act. From there, it will be a tense build to the big finale, with only one certainty: No matter what happens in November, at some point, the credits must roll.