Not only is Drake Doremus' new film set in a future where no one can feel anything, it takes you there. 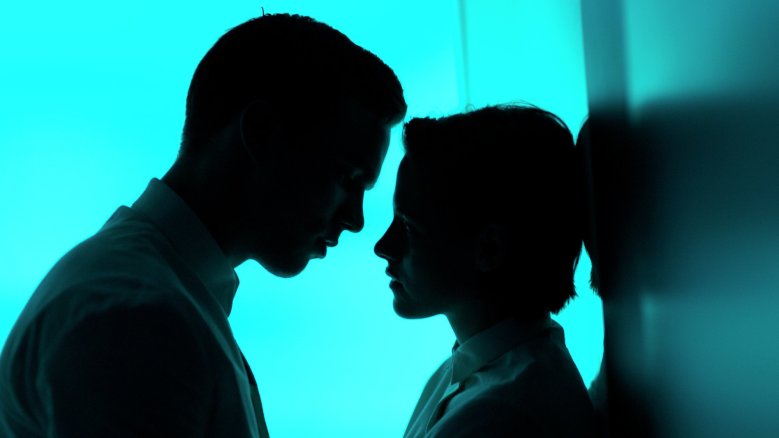 Unfolding like a narcotized, hyper-literal remake of “Pleasantville” that looks as though it were shot on the monochromatic set of Drake’s “Hotline Bling” video, Drake Doremus’ “Equals” is a painfully inert sci-fi romance that commits the gravest possible sin of modern cinema: It (almost) wastes Kristen Stewart.

One of those dystopian stories in which the vast majority of the world-building is accomplished via an inelegant barrage of expository information, “Equals” acclimates us to its sterile vision of the future by shoving information through the various screens that are built in to its set design. For example, a desk-sized tablet tells its user that The Great War eradicated most of mankind, bombs scorching 99.6% of the Earth’s inhabitable land (and 100% of its ugly people, it would seem). You know, just the trivial kind of detail that citizens of tomorrow might be liable to forget if not reminded by their inanimate workstations.

The voice observes that the surviving humans have regrouped into a single colony known as “the collective,” where — in a desperate bid to ensure a steady, peaceful repopulation effort — all emotion has been biologically eradicated (fetuses are “switched off” at some point between conception and birth). Nobody is happy, nobody is upset. Nobody has sex, nobody gets into fights. Babies are conceived through involuntary injections, and those who threaten to stray from the conformity of the collective are forced to live in a primitive jungle hellscape referred to as “the den.” In other words, every character in this interminable movie is dull by design.

READ MORE: How IFC Got Into the Kristen Stewart Business

Chief among them is a blank-faced young man named Silas (Nicholas Hoult), who works as an illustrator for the space department. There isn’t much more to say about him, because he’s exactly like everyone else; in the land of equals, the man with high cheekbones is king. On his commute to the office, a monitor cautions train passengers to watch out for symptoms of something called “Switched On Syndrome,” but Chekhov’s plays haven’t survived the apocalypse, so none of these oblivious drones are capable of predicting how a malady that’s innocuously mentioned in the first act will come to define the third. And “Equals” is nothing if not a movie that conforms to the most familiar tropes of its genre. At times, it feels as though Doremus’ pointedly generic story is — per its title — aspiring to be the most average film of its kind. One afternoon, a member of the collective jumps to their death, his head smashing against a concrete slab outside of Silas’ studio. “That’s unfortunate,” someone deadpans.

But our zombified hero notices that a colleague named Nia (Stewart) is having some kind of bizarre physiological reaction to the fresh corpse that just fell out of the sky — there’s a quiver in her lip (she is Kristen Stewart, after all). You already know where this is going. These crazy kids are “switched on” and ready to make a run for it, their story like a Bruce Springsteen song that’s been auto-tuned into white noise.

It’s a long road to the inevitable. Before Silas and Nia can make their escape, we have to watch them navigate every inch of an antiseptic world that looks like an overgrown Apple Store (actually several modernist locations in Japan and Singapore, claustrophobic but cleverly blended together).

But with only a handful of sets at his disposal, and a premise that mutes every bit of character growth into a story beat, the film quickly sinks into an endless dirge of non-scenes in which Silas and/or Nia sit in the bathrooms of their sleek apartments, feeling each bead of shower water as though their skin had previously been as numb as their minds. Doremus charts his leads’ growing emotional palette by contrasting them against a gaggle of static supporting characters — these roles are played by expressive young actresses like Kate Lyn Sheil and Bel Powley, each of whom is stuck in a movie that literally doesn’t allow them to emote.

In fact, none of the writer-director’s collaborators are given the freedom to display their gifts. That’s most egregiously true of composer Dustin O’Halloran, whose plaintive piano opuses have been the heart and soul of Doremus’ earlier films; here, he delivers some anonymous ambient fuzz and calls it a day.

Thank goodness for Stewart, who — in perhaps the greatest testament to her talent — nearly makes this movie worth watching. A standout among equals, her hungry, searching performance is the only thing that hints at what Doremus may have been going for, and managed to survive the process of shepherding it to the screen. In the film’s standout moment, Nia desperately tries to find the words to explain to Silas how she feels (“I just want to give. I don’t even know what it is, I just want you to take it from me”), Stewart tapping into a forbidden romance about a world in which the sensation of love has outlasted the word for it.

It’s hard to understand why Doremus, whose Sundance-winning “Like Crazy” was an effective reminder that emotion can be a narrative unto itself, would regress towards a story in which he renders that idea redundantly literal. But he has, and so we’re left to reckon with a movie that wants to be a neo-“Harrison Bergeron,” but instead feels more like a Scientologist’s screed against the dehumanizing dangers of anti-depressants. That’s unfortunate.

“Equals is now playing on Direct TV. It opens in theaters on Friday.”

This Article is related to: Reviews and tagged Drake Doremus, Equals, Kristen Stewart