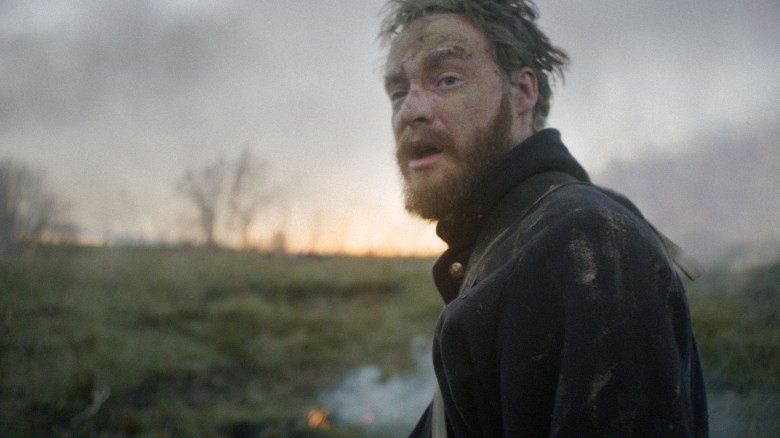 James + Semaj is a column where James Franco talks to his reverse self, Semaj, about new films. Rather than a conventional review, it is place where James and Semaj can muse about ideas that the films provoke. James loves going to the movies and talking about them. But a one-sided take on a movie, in print, might be misconstrued as a review. As someone in the industry it could be detrimental to James’s career if he were to review his peers, because unlike the book industry—where writers review other writer’s books—the film industry is highly collaborative, and a bad review of a peer could create problems. So, assume that James (and Semaj) love all these films. What they’re interested in talking about is all the ways the films inspire them, and make them think. James is me, and Semaj is the other side of me. This week’s column is about “Men Go to Battle,” which opens in limited release on Friday.

James: So what’s up with this odd movie about two brothers? They live on a farm, but they’re not exactly adept farmers. They get drunk and tend their land (not too well) and accidentally kill their chickens.

Semaj: These guys are all mumblecore dudes. The director and the main actors. At least that’s what it says online.

James: Yeah, even though it’s a very rural, historical feeling film, there is an attitude to the characters that feels contemporary.

Semaj: Contemporary attitudes filtered through the lens of the past.

James: What do you mean? Semaj: I think it’s a result of exactly what you said — this is what a Civil War film made by mumblecore dudes feels like.

James: A lot of it comes from the performances. I really like the actors.

Semaj: The two brothers played by David Maloney and Timothy Morton have worked together before on something called “New Cops.”

Semaj: But…what does that even mean, exactly?

James: I guess it’s like low-budget filmmaking — a focus on dialogue and relationships over plot. Quirky. Improv.

Related Everything You Need To Know About Mumblecore Filmmakers Today

Semaj: Yup, “Men Go to Battle” is like mumblecore had a baby with a Civil War film.

James: What is it exactly about the performances that makes you say that?

Semaj: Well, the brother — especially David Maloney — have a kind of contemporary, albeit rural sensibility that I see in people like Adam Driver, and Danny McBride, and the early films of David Gordon Green.

James: And the later films of David Gordon Green, like “Joe” with Nicolas Cage and Tye Sheridan.

Semaj: Or even Jeff Nichols. In another version you could see the brothers played by Michael Shannon and Shea Wigham.

James: Sounds dark, but I see what you’re saying. It’s not that the contemporary flavors pull you out of the film, or feel anachronistic. It’s more that when you watch older films about this period you don’t find this same kind of attitude.

Semaj: Even though people probably acted that way back in the 1860s.

Semaj: Fun and dumb, especially when they were drunk. They said silly things like “corn, corn, corn.” Basically they talked like real people and not like they were reading a script.

James: Rachel Korine plays the love interest of both brothers.

Semaj: Yeah, that definitely adds to the strange mix of historic drama with contemporary vitality. I mean, she was a fucking Spring Breaker, yo.

James: Yeah, she always has this little knowing smile, even when she’s not smiling. It’s like she’s this hip, knowledgeable — but also nasty — southern gal underneath whatever she does, be it a Civil War drama or “The Knick.”

Semaj: Maybe you think that because she’s married to Harmony and you know she was in “Trash Humpers” and a bunch of Harmony’s other raunchy things.

James: Could be. But I think it’s there: this energy beneath the surface that is a little knowing, and subverts the potential “history lesson” feel of a film like this.

Semaj: So, both brothers are in love with her and then one goes away to join the Union Army.

James: Yeah, it’s a little like Eugene O’Neil’s “Beyond the Horizon” in that sense — where one brother is a farmer and one is a poet/adventurer, but the farmer ends up sailing around the world and the poet stays on the farm and marries the girl, and they’re all miserable because they went against their natures.

Semaj: The brother who goes to war is obviously not meant for war.

James: But I think the point here, and maybe the point of the whole movie, is that no one there is meant for war. Both armies are made up of these regular dudes who one day are struggling on a farm and the next they’re marching into battle. Semaj: If the battle scene is accurate it’s really scary, the guys walk upright in a line right toward a tree line filled with firing guns. I can’t think of a less tactical way of leading an attack.

James: Yeah, I guess they were still adjusting their fighting strategies to the new technology of the weapons.

Semaj: Yeah, and then machine guns would change warfare after the turn of the century.

James: Exactly, soldiers wouldn’t march like that into battle anymore with machine guns just mowing them down.

Semaj: I’m also reminded of the “Red Badge of Courage,” the way the humanity of the boys is depicted in contrast to the horror of war.

Semaj: He’s a writer on your new HBO series with David Simon, “The Deuce.”

James: Yeah, anyway, he said that he loves gray areas, and referenced “The Red Badge of Courage,” when the Rebels and the Union soldiers talk across a river at night, and chat about things, and at the end they all say good night, see ya in the morning, you better duck.

Semaj: You can see that flavoring in his own work, when cops and criminals mingle. Sort of like the Road Runner and the Coyote chasing each other all day and then punching out their time cards at the end of the day and saying goodnight.

READ MORE: ‘Men Go To Battle’: How To Shoot a Period Piece Indie

James: There is a similar moment in this movie, where a Rebel and a Union guy meet across a river and consider trading tobacco and coffee.

Semaj: Yeah, I love that scene. It’s so full of tension and humanity. A naked moment. There is also some of that southern attitude we were talking about before.

James: Overall, I was haunted by this film. It’s like a subtler, smaller “Cold Mountain.”

Semaj: Maybe. The last thing it made me think about was how hard it must have been to date before social networking. There might have been one girl or one guy in the town you liked, and that was it, for miles around. You didn’t go away on vacation, you just stayed in town and the people you grew up with were the ones you knew, and no others. So maybe you and your brother would fall for the same person. And if it didn’t work out you were devastated. It must have been rough.

James: Now there are many fish on the Tinder.

Semaj: And on Grinder.