With nominations for "Getting On," "The Big Bang Theory," and "Horace and Pete," Metcalf deserves recognition as one of our most versatile, compassionate performers. 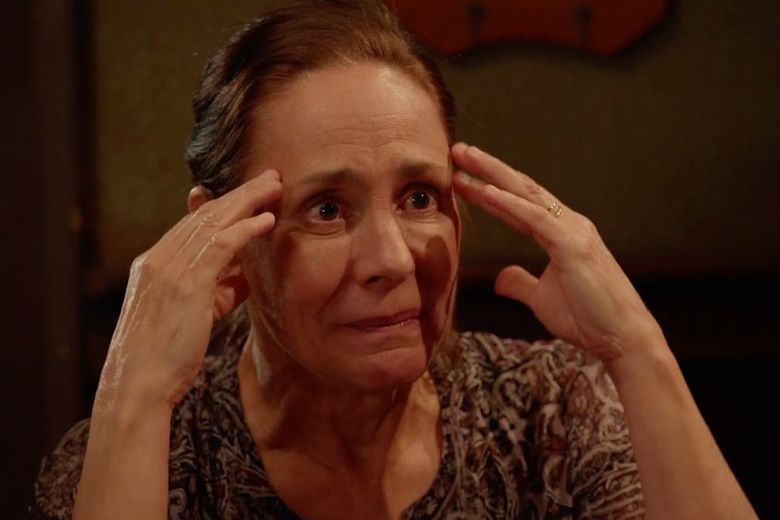 Laurie Metcalf in “Horace and Pete”

More than twenty years after winning three consecutive Emmys for Supporting Actress (Comedy) for “Roseanne,” and nearly a decade removed from her last nomination (for her guest arc on “Desperate Housewives”), Laurie Metcalf’s three nods this year mark a well-deserved return to the spotlight, even if the TV Academy’s decision to honor her in the Guest Actress (Comedy) category for nine minutes of screen time in “The Big Bang Theory” suggests a lack of imagination. Whether or not she nabs a surprise win in September, Metcalf is in the midst of yet another fruitful interlude in her long, expansive career, and that alone is worth celebrating.

In “Episode 3” of “Horace and Pete,” the camera settles on Metcalf’s face as if seeing it for the first time. Her monologue, nine minutes in all, isn’t pitched at the viewer, exactly—it’s clear from the start that Metcalf’s Sarah is speaking to someone else—but it nonetheless sustains the electric hush of the stage, its intimate, transfixing candor.

Turning down the corners of her mouth, furrowing her forehead and widening her eyes, Metcalf—Emmy-nominated for the performance in Guest Actress (Drama)—captures the hot flush of shame, but as Sarah divulges her secret the dam never quite breaks: She sniffs back her tears, swallows her bile, straightens her back. By the time the cut comes, to her ex-husband, Horace (writer/director Louis C.K.), Sarah emerges as the finest creation of Metcalf’s career, and perhaps its foremost emblem. Though still defined by her role on the long-running “Roseanne,” Metcalf is, lest we forget, one of our most versatile and compassionate performers, a consummate artist, at age 61, in the process of being rediscovered.

With its spare, almost self-effacing aesthetic, reminiscent of a black box theater, “Horace and Pete” uncorks the dramatic possibilities of the simple anecdote, the expansive silence, and Metcalf’s bracing turn gathers strength from this modest structure. As Sarah confesses to a desperate affair, and to the tides of emotion—desire, excitement, embarrassment, disgust—that have come with it, her description becomes the narrative, Metcalf’s inflections and expressions its central characters; C.K.’s unflinching direction drinks her performance to the lees, to the point that Sarah’s recollection of an afternoon sunbathing bristles with suspense, approaching the edge of some invisible precipice.

It is, down to the soft, tender murmur of Metcalf’s voice, a frank—and frankly radical—depiction of a middle-aged woman’s sexual life, and thus of her self-conception. “What am I?” Sarah asks near episode’s end, though by that point Metcalf and C.K.’s poignant collaboration has already eliminated the easy answer. The instinct to blame her, as she blames herself (“I’m sick, I’m corrupt”), soon evaporates; left behind is the sense that our frailties are to be borne, not undone, that the consequences of life’s mistakes linger on unforgotten, most of all by those who made them. “Horace and Pete” is not a series prone to aphoristic wisdom, but the episode recalls, in secular terms, Alexander Pope’s familiar adage: “To err is human; to forgive, divine.” Laurie Metcalf in “Getting On”

That Metcalf’s superb work in HBO’s “Getting On” reaches new heights in the episode “Am I Still Me?” is a mere coincidence, of course, but the echo of Sarah’s anguished question underlines the introspective aspect of Metcalf’s brilliance, her pliable features by turns hiding and illuminating her characters’ self-doubt. As Dr. Jenna James, the arrogant, high-strung director of medicine at a soon-to-be-shuttered geriatric care facility, she points her panicky eyes, elastic mouth, and rangy limbs toward the comic.

In the course of the series’ third and final season, she contorts herself into a bathroom stall with a co-conspirator (Jayma Mays), staples a woman’s head wound with manic glee, and tightens her lips into a grimace when a patient professes, “I love you for all that you do for me.”

“People are always saying to me, ‘J.J., do you want to be happy, or do you want to be right?'” she purrs as she flirts with the ward’s hunky new doctor, oblivious to her words’ implications. “And I’ve always chosen right.”

Beneath the half-lacerating, half-ludicrous surface of “Getting On,” for which Metcalf is nominated for Lead Actress (Comedy), Jenna and head nurse Dawn Forchette (Alex Borstein) wrestle with demons that assume, in stretches, a more doleful complexion. In “Am I Still Me?,” the doctor’s unhappiness bursts through her defenses, or attempts to, and the through line in Metcalf’s performances becomes clear.

Like Sarah, stopping up the full force of her shame even as she admits it, Jenna, faced with her mother’s death and the loss of her symposium’s top prize, swirls around the waiting room, lost, curling her mouth so tight she nearly chokes on her grief. When she welcomes the conferees a little later, the actress interprets Jenna’s greeting—”I don’t even know who I am anymore!”—as a strained and guttural cry, its comedy streaked with pathos: Metcalf is, in essence, a master of the disappearing act, unearthing her characters’ reserves of emotion by showing us how they’re buried.

But Metcalf’s most extraordinary feat, in “Getting On” and “Horace and Pete,” may be to grasp the twists and turns in Sarah and Jenna’s lives as if they were her own—and as an older woman fighting to be seen in Hollywood’s cruel culture, perhaps they are. Commanding our attention, yet too often out of view, it’s fitting that Metcalf, always underappreciated, should find in this pair of disappearing acts two first-rate, and forthright, performances. “When he talked to me, he looked right at me,” as Sarah says of her lover, and in the able hands of Laurie Metcalf, there’s no temptation to turn away.

This Article is related to: Awards and tagged Emmys, Getting On, Horace and Pete, Laurie Metcalf, The Big Bang Theory