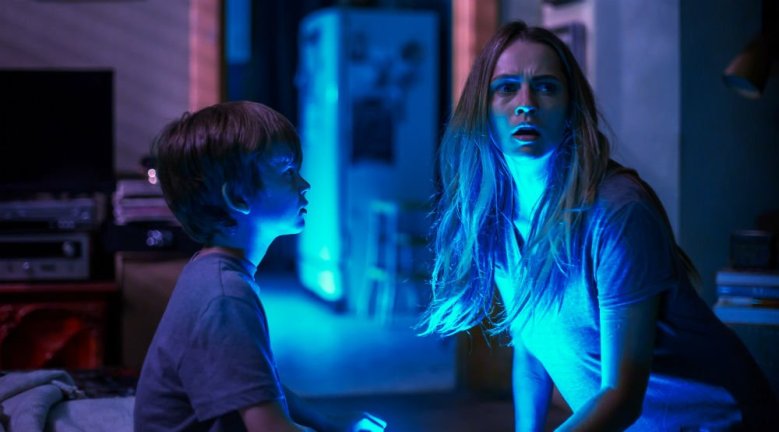 Within the first five minutes of David F. Sandberg’s feature film debut, “Lights Out,” an understandably addled character has managed to figure out the primary rule of engaging with the freaky spectre haunting him: She disappears when illuminated. Even while being chased around an appropriately creepy textile factory (is it really necessary to have that many slump-shouldered mannequins just hanging out?) by a stringy-haired and sharp-clawed monster, Paul (Billy Burke) can still figure out what it is that keeps the baddie at bay, a realization that Sandberg telegraphs to both his character and his audience with the minimum of time.

Too bad then that Sandberg can’t keep such a simple and clever premise going during the relatively slim 80 minute runtime of his film, a horror offering that suffers immensely from wicked rule-bending and a disregard for the snappy chills that initially recommend it.

Sandberg based his feature on his award-winning 2013 short of the same name, and in order to stretch about two minutes of original material into a full-length offering, screenwriter Eric Heisserer has had to build in some big time backstory, topped off with a generous dollop of mythology. Fans of the Peter Horton-starring 1994 television movie “Children of the Dark,” you better buckle up, because “Lights Out” has got your number.

Mostly — and wisely — told from the prospective of the punky Rebecca (Teresa Palmer, who does this Final Girl thing quite well indeed), “Lights Out” shifts gears quickly from its heart-stopping opening sequence to a more standard haunted house movie. Paul hasn’t come out of his warehouse-set encounter too well (okay, spoiler alert, he’s dead), but his living family are the ones who are in real trouble now, including stepdaughter Rebecca, wife Sophie (Maria Bello) and son Martin (Gabriel Bateman). This particular clan was already dealing with some terrifying troubles long before Paul was killed by a light monster in the world’s most poorly designed textiles warehouse, and things are about to get much worse. When Martin runs into issues at school because he keeps falling asleep in class, Rebecca swoops in, soon discovering that Sophie is putting her kid brother through the same kind of weirdness she herself encountered as a tween. That Martin can’t sleep at night is wholly understandable — here’s a kid whose entire world is being infiltrated by a monster that can only live in darkness, and his mother keeps shutting off the lights — but that the villain keeping him awake is also capable of having conversations with regular old humans and even breaking a city power grid, well, that stuff just doesn’t really shine too bright.

Sandberg’s original short film was built on the same premise that’s introduced early on in its feature version: It’s about a monster that only appears in the darkness. That idea provides for many inventive and genuinely unnerving visuals, as characters turn off and on the lights, see something creepy in the darkness, only to find it moving ever closer as they toy with illumination levels. That’s the big draw of “Lights Out,” and when Sandberg employs it, it’s shocking in the way that only a smart cinematic take on a literally primal fear can be. When “Lights Out” tries to turn focus on the rest of its story, however, the film flickers off.

That Heisserer needed to put more meat on the bones of Sandberg’s original isn’t the problem, it’s that so much of the story is spoon-fed to its audience, the same crowd that have already presumably endured some jaw-dropping scares, care of Sandberg’s visual acumen. Whipsmart Rebecca is all but handed an overstuffed box filled with old documents and records — and even an audio recording that just so happens to be cued up to its most important moment — that roadmaps the origin story of the UV-hating freak lingering just outside the door. Few horror film inhabitants have had to dig so little for information that’s so important, and most of it doesn’t even prove essential to fighting the monster that’s just a flip of the switch away.

Sandberg unquestionably has an eye for a great horror motif — and, given the frequent use of absolutely gut-churning ambient sounds and hair-raising scratching noises, an ear for it, too — and he’s assembled a strong cast to tell Heisserer’s expanded story, but even those smart decisions and clear talents can’t push “Lights Out” to brighter heights. Even with an ambitious conceit and unique premise, everything else is just too dim to make “Lights Out” really turn on.

“Lights Out” is in theaters on Friday, July 22.

This Article is related to: Reviews and tagged Eric Heisserer, Lights Out, Teresa Palmer