The creators of "Catfish" bring you a highly topical thriller about an augmented reality app gone wrong. 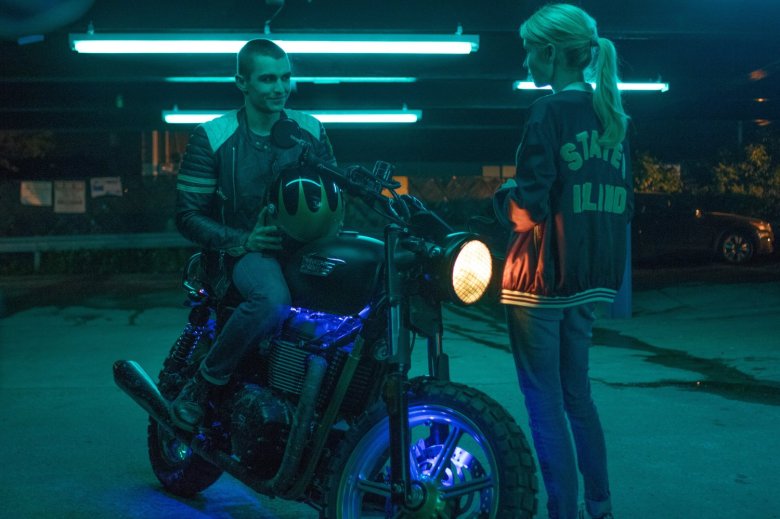 Beneath the neon haze of its teenage fantasia and the throbbing obviousness of its platitudes about the perils of social media, “Nerve” highlights some ugly truths about the economy of anonymous spectacle. This is a film that knows what people really want to see when they think that nobody is watching them. Blisteringly cool one moment and ridiculously silly the next (much like its high school heroine), this punchy and propulsive late summer surprise is able to capture the way we live now because it displays such a vivid understanding of the reasons why we live that way.

Based on Jeanne Ryan’s 2012 novel of the same name and helmed by “Catfish” directors Henry Joost and Ariel Schulman, “Nerve” will have a shelf-life of approximately 12 minutes (the technology it depicts has been revolutionized at least once since the movie wrapped production), but it sure is fun while it lasts.

The title refers to a new app that all of the most popular kids in school can’t stop talking about — an augmented reality contest that’s essentially a cross between “Periscope,” “Pokémon Go,” and David Fincher’s “The Game.” Titled simply “Nerve,” it’s a semi-legal secret that all of its users are warned not to share (so far as shady web business goes, it’s less Edward Snowden than it is that Instagram slushie delivery service that was all the rage in Brooklyn a few summers ago).

It’s best to think to think of the game as a live-streamed reality show with no adult supervision. The rules are pretty simple at first, and they only get twisted into nonsense as the film hurtles into its eye-roller of a third act. To begin, people are asked to choose if they want to be a “player” or a “watcher.” Players run amok in New York City, live-streaming their every move as they race to complete challenges that are issued by the watchers. Some cash is funneled into their bank account for every dare they accomplish, but as the payoffs get bigger, so do the risks. Each round lasts for 24 hours, and there can only be one winner.

Venus (Emma Roberts) is most definitely a watcher. A timid high school senior who would rather photograph her crush and stalk him on Facebook than ever talk to him, Vee (yep, Vee) is too gun shy to accept a spot at CalArts and leave her single mother (Juliette Lewis) with an empty nest back in Staten Island. There are money issues in play, as well — times are tight, and Vee has been offered a full scholarship to a local community college — but Jessica Sharzer’s (otherwise sharp) screenplay completely loses track of that thread once the financial stuff has done its job of pushing Vee into becoming a player.

For all of its techno-thriller flourishes, “Nerve” is a high school movie at heart, and — per that genre’s proud tradition — Vee is more of a type than she is a character. She’s the pretty wallflower who desperately needs someone to peel away a few of her layers, and the rest of the Breakfast Club is here, too: There’s the supremely confident and sexually-charged best friend (Emily Meade), the slack-jawed jock (Brian ‘Sene’ Marc), the sensitive guy who pines after Vee like a puppy dog (Miles Heizer), and Ian, the mysterious biker who steals her heart (Dave Franco). Vee’s first dare is to make out with him, and her second is to hop on his motorcycle and ride into Manhattan.

And so we’re treated to a fresh new spin on “Nick and Norah’s Infinite Playlist,” albeit one with a very different wild goose chase. Vee and Ian will never be younger than they are here, and “Nerve” bottles that fuzzy sense of romance, the movie pulsing with the youthful energy of a Grimes song and dressed in the florescent shimmer of that one perfect night that only seems to get better as it goes off the rails. The rules of the game make just enough sense for viewers to go along for the ride, and the gaping logistical sinkholes that eventually swallow the movie are so absurd that they perversely help return the movie to the realm of teen fantasy (the most distracting issue: Everyone’s phone has infinite battery life). To a certain extent, the script’s inability to find a clean way out of its conflict becomes its own commentary on our relationship with technology (who doesn’t feel trapped by their addiction to the Twitters and Snapchats and Ellos of the world?).

It’s all fun and games until, of course, it isn’t. This is a movie for a generation that grew up watching videos of suicidal Russian kids standing atop Soviet-era satellite towers, and it’s clear that the watchers won’t be satisfied until somebody loses their footing.

Joost and Schulman have been defined by their knack for using pop iconography to explore the ethics and anxieties of online identity politics, but their real talent lies in teasing lethal genre fare from widely available web tools. Their contributions to the “Paranormal Activity” franchise stand out due to a dynamic use of lo-fi camera tricks, and “Nerve” — for all of its salient points about how anonymity has turned the internet into a place where people seldom take responsibility for their actions — is most effective as a visceral thrill-ride.

The challenges that Vee and Ian are forced to complete are captured with the stomach-churning immediacy of a body camera, as every player is required to stream their dares from their own phones. Between the the film’s you-are-there perspective and its commitment to using obviously identifiable NYC locations, even the most absurd stunts feel real and romantic. You’ll cringe as Vee hops aboard Ian’s motorcycle and steers her blindfolded suitor down Park Avenue at 60mph — you may have to cover your eyes for the bit where another kid lays down on a subway track and waits for a train to thunder over his body.

“Nerve” uses your own curiosity against you — it dares you to look away even when it knows you probably can’t. Joost and Schulman don’t try to make viewers feel complicit in the spectacle of what we’re seeing (this is a multiplex date movie, not Michael Haneke), but their film still recognizes how even a thin veneer of unreality makes it easy to watch or encourage terrible acts of violence.

The watchers aren’t the least bit interested in shelling out any money for sex — the film cleverly leaves most of the making out off-screen — but they cough up thousands for a shot of death. Distance is the key: Most of us wouldn’t hurt a fly, but with even a half-step of remove we’d pay good money to see its wings get ripped off.

“Nerve” will seem obsolete tomorrow, but today it smartly contends that the internet is the gladiator arena of modern times, and it knows that picking up your phone is enough to get blood on your hands.

“Nerve” opens in theaters on July 27.

This Article is related to: Reviews and tagged Dave Franco, Emma Roberts, Nerve