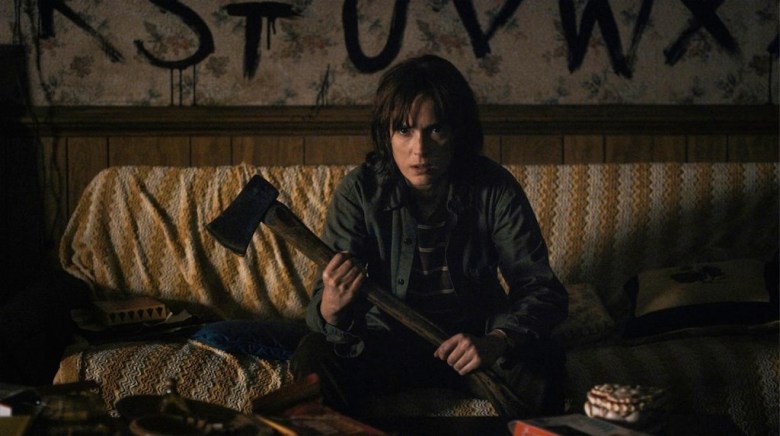 “Stranger Things” is a new eight-episode Netflix original series starring Winona Ryder as Joyce Byers, a mother living in Hawkins, Indiana whose son vanishes into thin air under very suspicious circumstances. The Matt and Ross Duffer-created thriller is considered “a love letter to the supernatural classics of the ’80s,” and critics are going wild for it.

“‘Stranger Things’ is nothing if not a surprising, sometimes scary, moving and successful homage to the era of Spielberg’s ‘ET’ and the 1980s themselves – as well as the films of the great John Carpenter,” says Deadline’s Dominic Patten in his video review. “Yes, there are a lot of clichés in ‘Stranger Things,’ but like outdoor string lights, they all hold together. They also cast a warm glow on the sheer enthusiasm and respect the series has for those who have come before and a very particular time in America’s recent history that now feels so far and so close at the same time.”

Gizmodo’s Cheryl Eddy calls it “must-binge-watch TV” and is impressed with the cast, “‘Stranger Things’ is so entertaining that it’s totally worth the time commitment, because believe me you will be mainlining the whole thing once it hooks you in,” she writes. “The characters are especially well-drawn, no small feat when most of them are around 12 years old.”

Another big fan of the show is JoBlo’s Alex Maidy who writes, “After seeing the first three episodes, I can say this is going to be the best show of the summer and may rival some of the blockbusters hitting theaters.” Maidy adds that it’s a true throwback to the heyday of Steven Spielberg’s Amblin Entertainment, “‘Stranger Things’ is a pastiche to films like ‘E.T.,’ ‘Starman,’ ‘Watchers,’ ‘Firestarter,’ and ‘Silver Bullet.’ It also should appeal to fans of more recent films like ‘Super 8,’ ‘It Follows,’ and ‘Midnight Special.’ This is a great show that will hook you from the first five minutes and will not let go.”

Henry Northmore of The List agrees with the other critics about the series reminding him of old classics, “‘Stranger Things’ is beautifully made. The fashion, the synth soundtrack, even the typeface in the opening credits are spot on. It could be a lost 80s relic. Capturing the look and feel of the era, referencing ‘Poltergeist,’ ‘Close Encounters of the Third Kind’ or a darker remix of ‘ET.’”

READ MORE: ‘How I Sold My Web Series to Netflix’: The Director of ‘EastSiders’ Explains His Secret

Jonathan Pile of Empire is lukewarm about the series and gives it three stars out of five writing (but is still intrigued): “There are also too few surprises. We learn so much before the characters do that we watch them realizing things long (sometimes multiple episodes) after we’ve worked out (or just been shown) what’s actually going on. But despite all this, there are enough human dramas, soapy teenage love triangles and nostalgia-coated kids’ adventures to make it an engaging eight episodes. The ’80s, man — dangerous yes, but what a time to be young.”

“Stranger Things” will be available on Netflix starting July 15.

This Article is related to: Television and tagged Netflix, Stranger Things, Winona Ryder