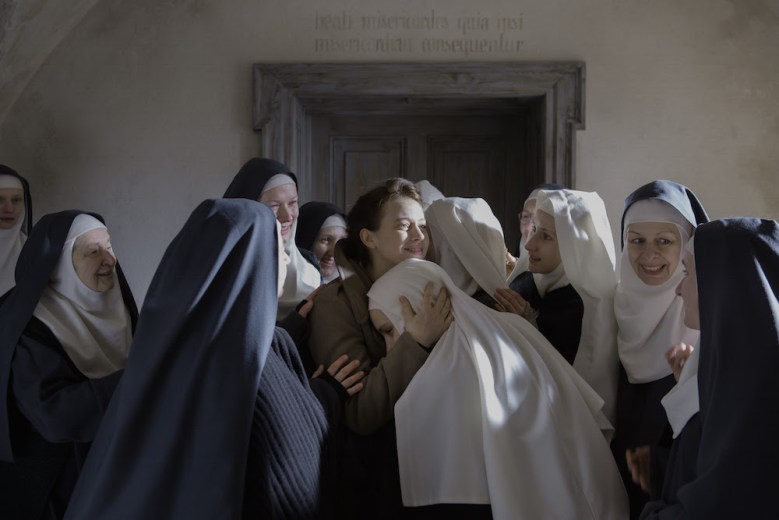 Fontaine’s film tackles a fictionalized take on the story of Madeleine Pauliac (the film renames her Mathilde Beaulieu), a doctor and Resistance fighter who was a member of the French Red Cross during and after World War II. “The Innocents” focuses on the gruesome period just after the end of the war, when Mathilde (beautifully played by Lou de Laâge) finds herself embroiled in a horrific tragedy that seems to specifically single her out to ease pain that goes far beyond the physical.

Stationed in Poland during the winter of 1945, Mathilde’s tour of service is nearing its end when a terrified nun from a nearby Benedictine convent shows up at her Red Cross encampment to ask for help. Unable to explain what she needs and repeatedly told to pursue help from Polish authorities, it’s clear there is something very amiss and that the nun is desperately in need.

Mathilde, who we soon understand to be a capable and brave doctor (thanks to both de Laâge’s forceful performance and an exceedingly well-written script), trusts her gut and follows the nun back to her seemingly calm and cloistered world, where she discovers the source of the nun’s anguish: A pregnant young holy sister. Secrets reign supreme in “The Innocents,” and while the first reveal of a bewildered young nun, desperate for help but wholly unable to articulate what has happened to her, is one of the most striking, it’s far from the most unnerving sequence in the film. As Mathilde learns more — how groups of soldiers infiltrated the convent and raped the nuns, impregnating many of them and leaving them convinced that they had somehow sinned in the face of their God, or how the convent’s iron-spined Reverend Mother (a fiercesome Agata Kulesza) has chosen to deal with the situation on her own terms — she becomes more and more invested in the fate of the convent and the new friends she has made there. Her own faith, never a source of much grief or joy, is tested at every turn, and she must take on the unexpected job of ministering to those who are seemingly much more equipped in matters of faith and spirit.

Fontaine handles the often extremely tough subject matter by approaching it with grace and sensitivity, populating the feature with the rich characters she and her cast craft — from the steely Reverend Mother to the conflicted young nun Irena (Joanna Kulig) to Mathilde, who grounds every action while still maintaining a pioneering spirit — as well as a tone that is appropriately reverent and respectful. It’s no easy task, as the narrative of “The Innocents” could easily fall into melodrama or, worse, use the story only as allegory for the pitfalls of spiritual devotion.

With Fontaine at the helm, it never does. The filmmaker ably weaves together a number of loaded themes, from the influence of religion on the devoted, the unique ways in which women bond with each other, the importance of remembering history and the horrors of war, balancing the many heartbreaks of “The Innocents” with ease. As much a film about crises of faith as it is the powerful friendships between women, “The Innocents” steadily unfolds over its nearly 120-minute runtime, revealing new secrets and new surprises (most of them, but not all, appropriately gut-wrenching) at every turn.

Bolstered by striking imagery from cinematographer Caroline Champetier and evocative editing from Annette Dutertre, the final result is a film that never backs down from the terrible stories it must tell, but delivers them with beauty and compassion. De Laâge, always a welcome on-screen presence (in roles as diverse as Melanie Laurent’s underseen examination of female relationships, “Breathe,” and Christian Duguay’s feel-good “Jappeloup”) shines at her brightest here, infusing a film that’s all about faith with one woman truly worth believing in.

“The Innocents” opens in limited release on Friday, July 1.