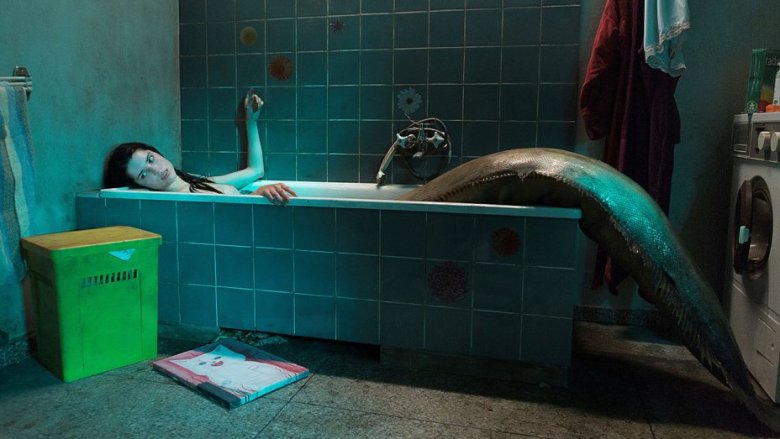 Imagine if Gaspar Noé and (the late) Andrzej Zulawski collaborated on a remake of “The Little Mermaid” and you’ll have a faint idea of what to expect from Agnieszka Smoczynska’s “The Lure,” a wonderfully demented new musical that bridges the gap between Hans Christian Andersen and Nine Inch Nails.

The fun begins in Communist-era Poland, where a mopey young musician named Mietek (Jakub Gierszal) stands by the waters of Warsaw and strums a folksy lament. If Mietek doesn’t seem all that surprised when two comely sea sirens pop their heads out of the surf and sing a reply (promising not to eat him, natch), perhaps that’s because he’s a little tipsy — given the strange energy that pumps through Smoczynska’s film from start to finish, it won’t be long before you know just how he feels.

Their names are Golden (Michalina Olszanska) and Silver (Marta Mazurek), and they’re nearly always naked. Their bodies are a source of constant fascination, though most of the men who look too closely or with a leer to their lust are made to regret the error.

Long, fairy tale hair dangles over their nipples — Golden’s locks are a deep brown, Silver’s flaxen yellow (the counterintuitive stamp of a movie in which nothing is allowed to make too much sense). When splashed with water, the mermaids sprout long fish tails and coo vaguely orgasmic dolphin sounds. When dry, their scaly lower halves are replaced with human legs, though there’s curiously nothing but a patch of flesh between them. The sisters are mythic, perpetually naked sexual fantasies who don’t have vaginas — in other words, they’re the perfect new act for the seedy nightclub where Mietek plays bass. “You can do backup vocals and then strip,” grunts the venue’s oafish owner.

Needless to say, “The Lure” is having some fun with chauvinist objectification; the film has a funny habit of lambasting dumb misogynist rhetoric by applying it literally, such as the bit when a man finds the slit in Silver’s tale and comments that it smells like fish. But those expecting more of the righteously violent multiplex feminism that characterized the likes of “Fury Road” will be disappointed in Smoczynska’s more seductive approach, which dips its toe into far murkier waters. Whatever agenda lurks beneath the surface of her debut feature is buried beneath a shimmering layer of good old-fashioned weirdness.

Its protagonists may be mermaids, but “The Lure” is fundamentally a chimera. On one level, the film is a classical musical that incorporates more sonic mayhem than anything since “Moulin Rouge.” One early sequence, in which the newly christened landlubbers go shopping for a new wardrobe at a brutalist department store, is furnished with exuberant choreography and several dozen extras; it wouldn’t be out of place in a film by Stanley Donen or Jacques Demy.

Later, Triton (yes, that Triton) will enter the story as the lead singer of a nü-metal band. The only thing that the various songs have in common is that none of them are super catchy sing-a-longs — they all veer closer to Sondheim than they do Andrew Lloyd Webber. Oh, there’s also some Donna Summer in there for good measure.

Whenever you think you might have your bearings, Smoczynska tosses in a new twist, the movie wriggling too fitfully for viewers to get a proper hold on what they’re watching. For one thing, the mythology never stops expanding, as new abilities (hey, Golden and Silver can communicate telepathically!) and new creatures (“the fiends”) are introduced at will. As the movie goes on, the curveballs come from increasingly unexpected directions: When one of the girls gets frisky with another woman, the human adds to the fetishistic fun they’re having by pulling out a loaded gun. Why not? Even on a second viewing it’s hard to make sense of why the story’s languid and comparatively lackluster middle third gets sucked into the fraught domestic lives of the mermaids’ foster family, but the sharp pivot feels like part of the film’s charm.

Until it doesn’t. Try as she might to pretend otherwise, Smoczynska builds her story upon the foundation of a fairy tale, and all of her fantastically bonkers ornamentations are supported by the romance that blossoms between Silver and Mietek. That’s the one arc that can be traced from the first shot of “The Lure” to the last, but the movie too often leaves it dangling, bloody chum for whatever craziness its creator can think up next. The whole film runs less than 90 minutes, but it’s so dense with unfulfilled ideas that it feels much longer. Ultimately, the narrative is pulled along on the strength of its sinister undercurrents, its hungry bloodlust, and the feeling that every dream has its dark side.

And, to some extent, the love story’s fitful development is justified by Mietek’s relative disinterest. “You’ll always be a fish to me,” he tells Silver from the start, casting her naïve efforts to win him over in a tragic light. Dare to peek under the scales of this wholly original and ominously enchanting nightmare, and you’ll find a simple story about the things that society forces a girl to give up if she wants to be part of our world.

“The Lure” premiered at Sundance, is screening at the Fantasia Film Festival, and is currently seeking U.S. distribution.

This Article is related to: Festivals, Reviews and tagged Agnieszka Smoczyńska, Fantasia Film Festival, The Lure