"The other day Paul Schrader said to me 'You know what your problem is? You actually like doing this.'" 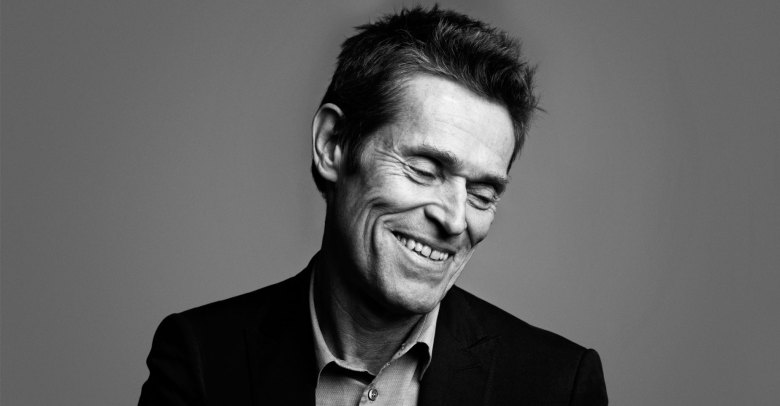 Willem Dafoe is not an insecure person. Holding court before a throng of journalists at the Karlovy Vary International Film Festival, the actor was asked about his crooked smile, and if — as a younger actor — he ever considered having it “fixed” in order to be more conventionally attractive. He grinned: “They were my teeth, and they looked fine to me.”

Dafoe, who came to this idyllic Czech spa town in order to receive a Crystal Globe for his contributions to world cinema and host screenings of “Pasolini” and “The Last Temptation of Christ,” shows his teeth without hesitation. The jagged lines of his face have steered him towards a career pockmarked with sadists and supervillains, but in person the man is almost constantly beaming. It’s been almost 40 years since he took a break from experimental theater in order to shoot an ill-fated role in “Heaven’s Gate” (he was later fired from the production and then cut from the film), but the curious Wisconsin native is still exuberant to be playing make-believe for a living.

The press conference was a surreal exercise in awkwardly translated questions that skipped from “Justice League” (“I don’t want to talk about that — I’m sure I’ll be talking about it ad nauseam when it comes out”) to the death of Micheal Cimino (“I felt very sad when I heard the news”) without skipping a beat, but Dafoe answered every question with a glint in his eye. He even laughed off the half-hearted come-on that ended the session (“Don’t get me into trouble!”).

When IndieWire met up with Dafoe privately later that afternoon, his spirits hadn’t diminished. Ensconced in a suite at the Grandhotel Pupp, the actor delightedly gawked at the palatial retreat that Wes Anderson had in mind when he wrote their most recent collaboration, “The Grand Budapest Hotel.” Still giddy over the Mendel’s pastry box that a fan had handed him earlier that day (he snapped a pic to send Anderson before security panicked and took the gift away), Dafoe perched on a gorgeous pre-war ottoman and talked us through one of the most remarkable and eclectic careers in modern cinema.

You’re very loyal to your directors, and they to you in return. As you re-team with certain filmmakers, do you find that your working relationship with them affects your performance at all?

It does impact the work. Sometimes it stays the same, sometimes it develops, sometimes it goes elsewhere depending on what kind of work they’re doing. With Abel [Ferrara], I’ve become more and more involved with the process and we become more and more involved in depending on each other to get stuff set up. With Paul [Schrader], he’s kind of in and out, because sometimes he needs me and sometimes he doesn’t, but he asks me anyway to shore up things, financially and artistically. We have a shorthand — he trusts me, and I trust him. With Lars [von Trier], I’ve worked with him three times, but really the only substantial time was “Antichrist,” which is a film I like a lot. It was a difficult one to make, because he was in a very delicate place, very phobic. I adore him, I would do anything with him, because he’s really fun to work with, and I think he’s a great filmmaker. The relationship is conditioned by the project.

Are there filmmakers you’re still desperately hoping to work with?

Many! I always get self-conscious about namedropping because it seems like you’re sending a message.

But there’s so many! Sometimes it’s futile, because some filmmakers just aren’t telling stories that you fit in. Or you don’t fit in to their style. I remember meeting Carlos Reygadas and saying “Wow, I love your stuff, can we please do something?” And he said “Nah, I really like to work with non-actors.” And I said, “But I like to be pretend I’m a non-actor!”

That’s too bad, you could have been great as the demon creature in “Post Tenebras Lux.”

I’d have liked that challenge! I’m interested in that. I’ve always admired actors who didn’t seem like actors — the Warren Oates’ of the world. I’m more attracted to that kind of performer than to someone who’s kind of front-loaded and you’re dazzled by their craft.

Tracing the path of your career, it seems like the only real through-line is that you’re always following your muse. Every role you take speaks to you in some way, even if what they’re saying is sometimes beyond us.

And sometimes beyond me! But I smell something…

From the Wooster Group to “Justice League,” your career just seems more fortuitous than calculated. Would you say that’s true?

I think so. I react to things! I’m not asleep. And I’ve always been ambitious and terrifically disciplined, so don’t get the idea that I’m just a guy hanging out and stuff is happening to me. I try to make things happen. But at the same time I trust serendipity. You can’t force things. When stuff comes together you support it and make it happen — I don’t have a plan, and I think that’s partly because I’ve never had a formal approach or a formal dream. In fact, I distrust dreams. All this stuff about following your dream and realizing your dream… it doesn’t sound good to me.

So there’s no math to how often you agree to do a blockbuster movie or anything like that?

There’s no math up here [points to his head] but there’s some math down here [points to his heart]. In the sense that you think “I don’t want to get stuck. I don’t want to think that this is the only way to do things or make things or tell stories or perform.” Having eclectic tastes or eclectic choices isn’t about showing off and doing lots of different things, and it’s not a calculated career thing. You hear those old movie stars saying “I do one for them, and one for me.” It’s not like that either — they’re all for me! But they’re all for me under different circumstances.

You sit in your trailer wishing you could be doing a Carlos Reygadas film.

I don’t sit in my trailer — that’s the one thing that’s a forever.

I’m sure your directors appreciate that.

They do. Except for recently I worked in China and Zhang Yimou was great, but the structure, the way they worked… they’d force me back to my trailer. I’d say, “I want to hang out” and they’d go “No, we’re not ready for you.” “But I want to watch.” “No, but they’re worried that you’ll be in the way.” “No, I’ll find a place.” “No, really, you better go back to your trailer.” It was tough!

Given the caliber of the filmmakers with whom you’ve worked, and how much you’ve brought to so many of those collaborations, it seems strange that you’ve never directed.

I think it’s real simple: I’m a doer, not a watcher. I’ve done things like taught, and I’ve sort of directed little things or parts or a sequence or something, and I always feel like if I do it for someone else I come towards something and I feel freer. But if it’s my responsibility — and I think the director has to have the whole design in mind, they have to see the whole thing — and I just don’t have that kind of ambition or character. Like I said, I’m disciplined and serious and all that kind of stuff, but I like to be responsible for my stuff.

You were effectively raised by your five sisters, and you wrote a Guardian op-ed about how you “gravitate towards women.” But looking over your filmography, women directors are few and far between.

Mary Harron, Kathryn Bigelow, my wife [filmmaker Giada Colagrande]. Twenty-five years of working with a female director in the theater.

Right, and yet — even in the career of an actor who’s adamantly worked against sexism — the balance is off. Does that reflect an industry that’s still uncomfortable with the idea of a woman behind the camera?

It’s a cultural thing: Some people can’t take it from women. It doesn’t matter what kind of film it is, I believe in a director-driven cinema, and some people just can’t take direction from a woman.

Do you think things are getting better?

I don’t know if things are getting better. The numbers are still pretty bad. Of the directors with whom you have worked with, are there any you would consider playing in a biopic? Can we ever expect to see you star in a film called “Von Trier?”

You know, I’m not that attracted to biopics. “Pasolini” was a particular kind of thing. One thing I do remember is that many years ago I did “Tom & Viv,” which in a way was quite a conventional movie — I think it was a good movie. It was an English movie and I liked the director [Brian Gilbert] very much, but when he asked me to do it I didn’t want to. I complained that the character was tall, thin, reedy, more English than the English, and the director was like: “Hey, asshole: Are you an actor or not?” And then once I decided to do it, it was a great experience.

To attach yourself to a figure like that and research it and flirt with their ghosts, you have a lot to work with. With T.S. Eliot, much like Pasolini, you knew where he lived, you had recordings, you had biographies. There were letters, plays, and public writings. You could make a construction of where they were in their life and then kind of approximate in your own head what you’d do if you were him. I don’t know if that even answers your question — this is why I’m not a director! Although, I will say that I do a pretty mean Abel Ferrara imitation. So one day… it won’t be a film about Abel, but I’ll rip him off or something terrible!

You’re 60 years old and have more than 100 film credits to your name, including at least four projects that are currently in post-production. So what keeps you going? Are you rejuvenated by the acting process?

I am. It’s a defect — a beautiful defect that works in my favor. The other day Paul Schrader said to me, “You know what your problem is? You actually like doing this.”

Every set is different. I still believe in cinema. There’s a fight to be fought.

Do you think that fight has gotten harder since you started doing this?

I do. The battlefield has shifted, and I’m placed differently in that world, but yeah — I think it’s harder. For obvious reasons: Internet, the whole generation growing up that relates to videogames more than films, people not wanting to go out and sit in a big dark room with strangers and watch something when they can sit at home.

Is that feeling more alive in Europe these days, where you spend so much of your time?

Some places yes, some places no. But still I believe in the public life, I believe that people should be in the streets and hang out together, and I think with culture in general people need to have their feet held to the fire. People need to go out to experience something where they don’t have control over the situation.