The late Iranian filmmaker's final work is a brief encapsulation of his skill. 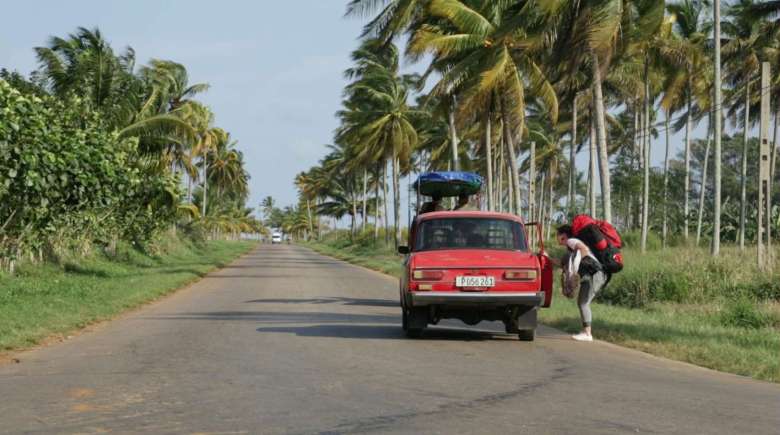 When Iranian director Abbas Kiarostami died earlier this year, the outpouring of grief was a spectacle unmatched by any other from the film world in recent memory. Where the deaths of Jacques Rivette and Michael Cimino provoked shock and pain within the communities of their admirers, Kiarostami’s passing was of a different scale: it revealed the formative influence he exercised over the minds of a great many cinephiles, and suggested the reason that nobody seemed to be speaking about him was because there was little left to be said.

His funeral in Tehran was attended by a huge crowd of grievers, but the bustling scene paled in comparison to the sheer unanimity and ubiquity of the film community’s remorse. Like Chaplin, one of his favorite filmmakers, Kiarostami seemed to be liked by everyone.In what is plausibly Kiarostami’s last completed film, the nine-minute Cuban short “Passenger,” which just showed at the Locarno Film Festival, a driver picks up a young woman hitchhiking by the side of the road. She is in Cuba for a workshop with a famous Iranian filmmaker trapped on the roadside by the vagaries of the airport bus system (she’s two days late). The personal dimension of the project is immediately obvious — Kiarostami directed “Passenger” while running a workshop in Cuba for young filmmakers. But more on that in a bit.

The driver, who is not a cinephile, has read about Abbas Kiarostami in the local newspaper and knows the titles of several of his films. As the girl describes “el Maestro” in adoring terms, the driver insists that he is indeed interested in seeing the movies, but that his work has prevented him heading to the theater in the next town to catch them.Their exchange is moving because it inadvertently stands as a testament to Kiarostami’s character and influence; it is conceivable that something like this could happen in a place as seemingly isolated as Cuba. It’s also a typical Kiarostamian exchange: the automobile setting, the sedentary rhythms of dialogue mixed with the sound of the engine and the passing landscape, the bonds developing across generational lines, and the extra meta level of irony (in this case, because the director is dryly building this ode to his own reputation). In other words: a touching coda to a career that had long been winding down.

Kiarostami, with Hou Hsiao-hsien, was the key filmmaker in the nineties to bridge the ever-dissolving divide between arthouse and mainstream; he combined a great many approaches—experimental, humanist, documentary, “slow cinema”—and his reputation was all the more great and all-encompassing for it. In many ways, he embodied post-revolutionary Iranian cinema and yet refused to engage directly with politics, often criticised for his passivity towards the censors.Kiarostami’s career trajectory began in Iran and ended in Asia; the forms moved from documentary to fiction and back again (though it was all along a division he openly defied). The Kiarostami style reached its apex with “Ten” in 2002, after which the director would only make three more fiction films. As the director Catherine Breillat put it, “Ten” was “perfect Kiarostami, because there’s no more image, no more mise en scène, just a camera and intelligence, and pure thought.” After the trio of prestige experimentations “Shirin” (2008), “Certified Copy” (2010), and “Like Someone in Love” (2012), Kiarostami’s attentions turned to smaller projects and to regular trips to festivals and conferences as his health began to fail him.

One such project was a workshop in Cuba in 2015, the subject of the short program in Locarno dedicated to the filmmaker. It was here that Kiarostami supervised the creation of 52 short films produced in and around Pueblo Textil; seven of these movies premiered in Locarno with their own sidebar entitled “Filmmaking in Cuba with Abbas Kiarostami,” which also contained the director’s own recent short. The unfortunate effect of the program is that the star director’s movie inevitably exposes the weaknesses of his students’ work, especially when there is an obvious debt owed to his style.

Most of the shorts take as a starting point the child’s-eye-view perspective of parts of the Koker trilogy — some the wordless feeling of time passing in tangible terms. Very few, however, get at what makes Kiarostami movies distinctive. Part of what’s brilliant about the best of Kiarostami is his effortless melding of traditions that once appeared disparate. The simplicity of Kiarostami’s philosophical approach is occasionally a pitfall: sometimes it evinces an elegant and pure outlook on his material, while other times it suggests a limited philosophical outlook (this is perhaps why the director has rarely been able to speak about his work in very complex terms). Each of these seven shorts absorb a single, simple aspect of Kiarostami and duplicate it on reduced terms, not realizing that it is in their synthesis where his artistry lies.

Kiarostami is a structuralist—he thinks not only in terms of moments but in terms of the cumulative effect these extended minimalist sequences will have as blocks within the film’s architecture. The shorts, meanwhile, all are concerned with these kind of “moments”—the slow-motion opening shot of grinning children that opens “Pezcal,” the sequence in “Por si acaso” in which local kids imagine themselves as the directors of a zombie war film—and less with developing any kind of a complex structure.

Still, it is undeniably interesting to see a tribute to a filmmaker composed of the products of a late-life collaboration. Perhaps the author of the great death image in contemporary cinema—the final shot of “Taste of Cherry” (1997)—would have liked to be remembered mixed in among the work of his students. And if the shorts do not exactly embody Kiarostami’s artistry, they certainly embody his humility.

This Article is related to: Film and tagged Abbas Kiarostami, Cuba, Reviews