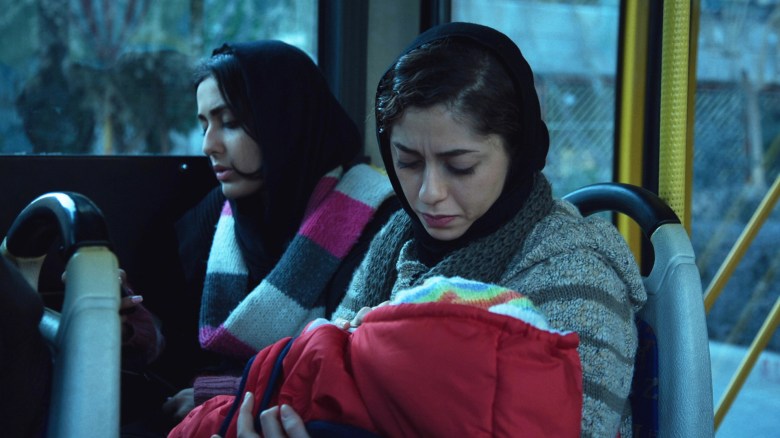 READ MORE: Life On the Margins – How This Filmmaker Captured Youth Culture Yugoslavia

At age 26, Ali Asgari went to Europe to Italy to study filmmaking, but his stories are always rooted in his Iranian hometown of Tehran. Even when he’s had to shoot in Europe, he’s always found a way to bridge the two continents. With a long list of accolades and his first feature film on the way, Asgari is certainly a filmmaker to keep an eye on. His short films have screened in competition at prestigious festivals, with three different films having played at Cannes, Sundance and Venice over the last four years. They are intimate, heart-wrenching short films, which through modest and beautiful mise-en-scène capture the lives of characters struggling to make the best of helpless situations.

In “The Baby,” a woman who hides her illegitimate child from her parents. Every frame brings to life how painful the simplistic set of events are for the character. These themes can be quite controversial in Iran, however, where censorship still plays a big role in everyday life.

We had the opportunity to talk to Asgari in Locarno, where he is participating in this year’s Filmmakers Academy, about how he manages to deal with censorship and what he wants to convey through his films. When did you decide to become a filmmaker?

I’ve always liked to watch films, at the beginning mainly American classics, and later, when I was 18, European films. By watching them, I started to fall in love with cinema, which inspired me to enter the world of filmmaking. I first became an assistant director, working in short and feature films. Being an assistant helps you to understand what’s behind the camera and to get an idea of how cinema works. When you’re watching a film, you’re just watching what’s in the frame, but behind the camera there is another world. However, after three or four films as an assistant, it becomes a job and it’s not interesting anymore, as you feel the need to explore that world more in depth. That’s why I decided to start making my films independently.

READ MORE: Film Freak – Why This Young Director Chose Celluloid For the Stories He Wants to Tell

You spent a lot of time in Europe, studying in Rome and participating in different festivals. Did this have any impact on your films?

When I came to Europe I was 26, which means that most of my memories come from my life in Iran: That’s why I went back there to shoot most of my films. When you’re making a film, you’re also telling a story, which is connected to the culture and society that you know best. After having moved to Europe, I still felt that I did not belong to that culture and that society, and the language is always a problem too.

What differences did you notice in the way people make films in Europe and in Iran?

In Europe, the main problem in making films is money, and you have to wait for the necessary funds. This means that when you actually have the money you need to shoot your film, the ideas you originally had might not be as fresh and as good as before. In Iran, on the other hand, the biggest problem is censorship: your idea has to go through many filters, and at the end of this process it won’t probably be the same. Often these changes become clear in the process of writing, as you think of ways to make your film follow the unwritten rules of censorship. How did censorship affect you and your films?

It is known that there are some basic rules you need to respect to avoid censorship in Iran. For example, you should not show nudity or people kissing. You should not talk about religion. However, there are much subtler things that can bring censors to ban a film, and even though my films have never been censored, they have never been shown in Iran because I have always done exactly what I wanted to do.

The subjects of your short films are all outcasts from society, such as a woman with a secret she cannot reveal to her parents, a woman affected by cancer in a foreign country, an HIV-positive man who cannot be cured, and so on. Is that a theme you would like to keep working on?

Some filmmakers are attracted to specific genres such as drama or comedy. My interest instead is to portray the human condition of people who are coming from a certain social background. Nowadays, many people do not really care about what’s happening around them, and I want to show the pain, the sorrows and the emotions of other people through my own feelings. It is very important to me that I leave the audience with the feelings that I expect them to feel.

READ MORE: Reinaldo Marcus Green: How a Young Person of Color’s Life Can Change in a Single Moment What impact do you think you can have as a filmmaker on the image Iran has abroad?

In the history of cinema, politicians and other influential people have always been aware of the power of films. For example, Mussolini established Cinecittà, one of the biggest European studios of the time, and the same happened in Russia and in other parts of the world. Films were used as propaganda, as it is known that they are a good tool for manipulating people’s ideas. The biggest film festivals have 300,000 attendees, and this is not even comparable with the power of media, which can reach entire countries. However, I still think that it is possible as a filmmaker to show what really happens in your country and convey your ideas to your audience.

What are your plans for the future?

I am currently a member of the [Cannes] Cinéfondation Residence, where I am writing my first feature film. I am planning on shooting it in January, and it will share some common elements with my short films, in particular in terms of subject and structure.