TCA: Bruce Campbell, Rob Tapert, Lucy Lawless and the rest of the cast promise fans will be particularly delighted by the secrets in Season 2. 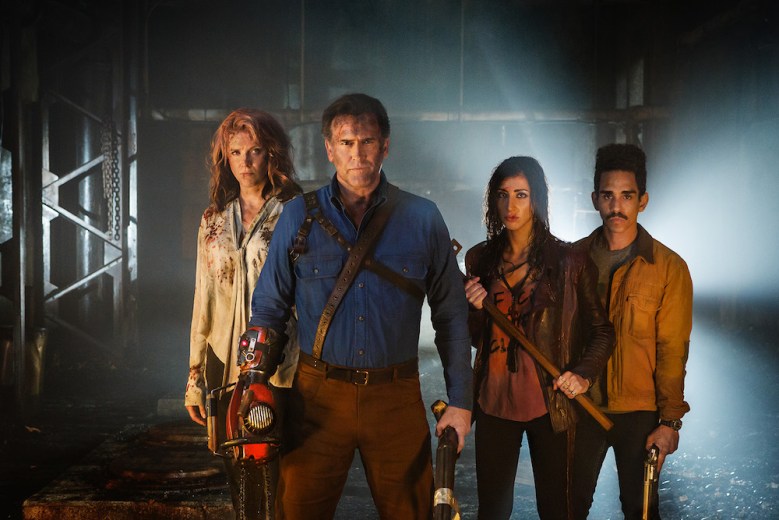 Bruce Campbell doesn’t do anything half-assed, so it should come as no surprise he’s promising big things for “Ash vs. Evil Dead” Season 2.

“This year has two fat-ass Easter eggs,” Campbell said. “You’ll go, ‘Holy crap!’ at the first one, and then at the second, you’ll go, ‘I didn’t think there could be a bigger holy crap but there it is!'”

Fans learned at Comic-Con that the legal rights prohibiting the Starz horror-comedy hybrid from referencing “Army of Darkness” have been resolved, which means there will be plenty of treats for die-hard Ash fans in Season 2.

Campbell implied as much when he took to stage at Starz’s Television Critics Association presentation Monday morning. Campbell was joined by executive producer Rob Tapert and co-stars Michelle Hurd, Dana DeLorenzo, Ray Santiago, Lucy Lawless, and Lee Majors, all of whom teased a very bloody follow-up to what was already a bright red Season 1.

But Campbell, in particular, couldn’t contain his enthusiasm over Majors addition to the series.

“Who else would Ash want as his father than Lee Goddamn Majors?” Campbell said, after praising the actor’s professionalism on set and experience in the business.

Majors is joining the cast as Ash’s father, Chet, who resurfaces when the three heroes from Season 1 — Ash, Pablo (Santiago) and Kelly (DeLorenzo) — visit the titular character’s hometown in search of Ruby (Lawless). Viewers come to find out Ash isn’t the most popular person in Elk Grove, Mich., even within his own family.

Majors, the former “Six Million Dollar Man,” said he had “maybe” seen one of the “Evil Dead” movies when they asked him to join the show, but he was immediately on board after bingeing the first season “in one sitting.”

“I thought it was strictly a horror show,” Majors said. “The chance to play that character’s father and try to bring something good out of him is a challenge.”

“He’s a troublesome hero,” Campbell said. “You don’t know if he’s going to help or not when he shows up. And I like that. Ash, for all of his flaws, he is foretold in the book. You make fun of him all you want, but he’s still going to save the world.”

“Ash vs. Evil Dead” premieres on its new night and time beginning Sunday, October 2 at 8pm. Watch the trailer below.

This Article is related to: Television and tagged Ash vs. Evil Dead, Bruce Campbell, Starz, TCA 2016