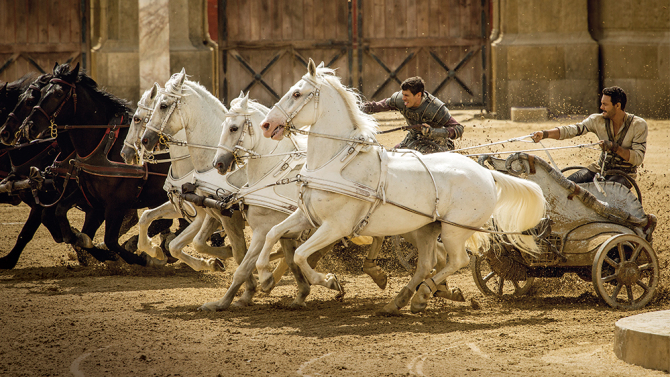 Almost six decades ago, Charlton Heston embodied Ben-Hur, a prince falsely accused of treason by his adopted brother, in the Academy Award-winning blockbuster of the same name. Winning 11 Oscars, including Best Picture, this drama became a classic in cinema history. Now, the epic story of Judah Ben-Hur returns to the big screen in Timur Bekmambetov’ remake. As the helmer takes audiences back to the chariot races, it seems like critics aren’t up for the ride.

IndieWire’s David Ehrlich calls the film “chariots of misfire” and states that “Jesus dies for our cinema sins in this biblical epic.” He also notes that “if each new “Ben-Hur” is a reflection of the time in which it was made, this one may remember 2016 time as a grim time for blockbuster entertainment.”

Owen Gleiberman of Variety chimed in by comparing the two versions: “The 1959 ‘Ben-Hur’ was directed, by William Wyler, with a kind of fake classicism, and that was part of its cardboard studio-system majesty. It didn’t need to be subtle; it worked as mythological machismo. But the new ‘Ben-Hur’ tries to ‘humanize’ everything, starting with Huston’s overly moist Judah, and the result is that this story seems a lot less human than it did 57 years ago. It’s become a chariot of mire.”

The Hollywood Reporter’s Todd McCarthy asked, “What were they thinking?” in his review. “Visually, it’s on the grubby side, its compositions imprecise, the editing far too busy (hardly any shot in the chariot race lasts more than two or three seconds),” he criticizes. “None of the performances particularly register. As for the score, let’s just say that the reputation of the late, great Miklos Rozsa, who composed the extraordinary music for the Wyler version, has just been strongly reinforced.”

“I just don’t get why certain filmmakers are drawn to doing big-screen remakes of major Oscar-winning movies that should be untouchable,” stated Pete Hammond of Deadline. “It oddly feels like a cut-rate version, and at 125 minutes — nearly 100 minutes shorter than the 1959 roadshow running time — there is proof that it is.”

Entertainment Weekly‘s Joe McGovern noted that this arena, unfortunately, is no Thunderdome. “The chariot race is sloppily framed, choppily edited, and droopily choreographed, with special effects that look like they needed another few passes through the CGI machine,” he described, adding, “The 1959 sequence is one of most famous in the history of movies because, for all the chaos and carnage, audiences could easily follow the action, thanks to clean, generous wide shots. Bekmambetov’s insistence on close-ups might have been a budgetary matter, but the result is a muddled, inconsequential mess—and another symbol of the modern conservatism and lack of tentpole imagination.”

As for Richard Lawson of Vanity Fair, he also agrees that the chariot race is the least memorable and adds in his review, “Yes, I’ve been moved (ever so slightly) by a Timur Bekmambetov movie, a remake of ‘Ben-Hur’ no less. ‘Ben-Hur’ is made with enough conviction and thoughtfulness that its messiness, its grandstanding, its occasional bouts of clumsiness can’t crack its admirably sturdy foundation. It turns out that pairing Bekmambetov with the right material and, most crucially, the right script can yield positive results.”

“Ben-Hur” arrives in theaters on August 19.

This Article is related to: Film and tagged Ben-Hur, Review Roundup, Timur Bekmambetov