The TV Academy's appreciation for two food-centric series from Netflix and Bravo reflects the medium's embrace of fine dining. 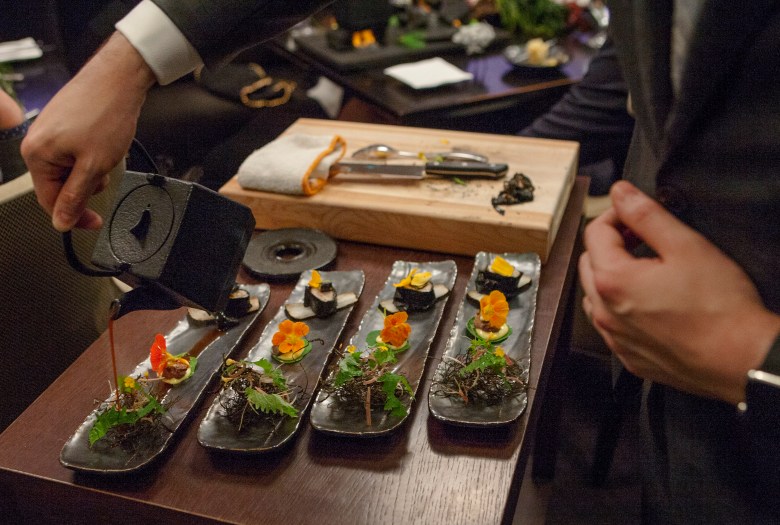 The signature moment in each episode of Netflix’s Emmy-nominated “Chef’s Table” is no more than a succession of plates. Composer Duncan Thum’s melodramatic strings herald abstractions of texture and color, labeled as if on view at the Met: A rough pile of gray shards and purple flowers spattered with orange liquid (Grant Achatz’s “Graffiti, Carrot Spray Paint, Wild Mushrooms”); a wood husk filled with delicacies in the guise of dirt, twigs, and moss (Dominique Crenn’s “A Walk in the Forest”). Each montage is an expression of the belief that haute cuisine is high art, one shared by the series’ renowned subjects. “There [are] other disciplines that we can draw on for inspiration,” Achatz remarks. “There are no rules. Do whatever you want.”

For a series defined by cuisine that defies convention, however—gold-leafed ants and pillows of nutmeg air, flights of fancy and sleights of hand—”Chef’s Table” is conventional in the extreme, leaning on the soaring music and experimental dishes to lend its unremarkable biographical sketches their overweening seriousness of purpose. Often gorgeous, always grave, Netflix’s docuseries, created by “Jiro Dreams of Sushi” director David Gelb, is thus a reflection of, and a logical conclusion to, the trend Nora Ephron identified in her 1967 essay “The Food Establishment”: The process by which “food acquired a chic, a gloss of snobbery it had hitherto possessed only in certain upper-income groups.”

“Chef’s Table” combines the lascivious close-ups of magazine spreads and Food Network programs with the rock-star personas and rarefied techniques of culinary modernism, then sets it all to Vivaldi for good measure. It practically burps Michelin stars, but it has nothing to do with how most of us eat.

There’s pleasure to be had in this aspirational thrust, of course. Who wouldn’t dream, after seeing the “magic show” of “Chicken Thigh, Kombu, Shishito, Lily,” of finding $500 to fund a meal at Achatz’s Alinea? Who wouldn’t want to be whisked off to Bangkok to sample Gaggan Anand’s “Indian Foie Gras,” or stop in for “Squid with Lamb Sweetbreads, Black Garlic, and Cave Cheese” at Ana Roš’ Slovenian outpost?

But “Chef’s Table,” in deploying the usual techniques (voiceover narration, talking heads) to trace the traditional arc— unsung artist overcoming adversity to earn his or her place in the star-chef firmament— soon exposes its own limits, which have as much to do with its attitude toward food as with its style or structure. If citing the influence of Ferran Adrià’s El Bulli is now a familiar commonplace, as it is on “Chef’s Table,” has breaking the mold simply become the mold? Is this the new “Food Establishment”? “Chef’s Table” Season 2, with food by Chef Enrique Olvera from Pujol in Mexico.

The answer to these questions is more fraught than “Chef’s Table” is willing to admit, which might be its foremost failure: Despite its admirable emphasis on global flavors, its implicit message is that foams, spheres, gels, and powders are the forms of food that “matter,” that the art is in the transformation, not the taste. There are exceptions—Anand’s curries, Enrique Olvera’s mole—but by and large its perspective is that of hard-charging Brazilian chef Alex Atala. “We don’t do that to be delicious,” he says of his restaurant D. O. M., in São Paulo. “We do that to be, ‘Wow!'”

As former New York Times restaurant critic Mimi Sheraton lamented to Ephron nearly fifty years ago, the effect of such showmanship has not been, in the main, to encourage sustainable agriculture, but to create a system in which “food is marketed and grown for the purpose of appearances.” (As the Tampa Bay Times’s Laura Reiley found in the course of a recent investigation, higher-end restaurants’ “farm-to-table” bona fides are often suspect, too.) Even if we set aside the more pressing problems of hunger and severe malnutrition, the benefits of the “Chef’s Table” gospel—the use of fresh, local, responsibly produced ingredients—are still mostly reserved for the affluent, the promise of change more theoretical than real. Call it trickle-down cuisine. Curious, then, that Bravo’s “Top Chef,” despite reveling in the “lowbrow” conventions of reality TV, at least deigns to hear the other side of the story: In the routine rhythms of mise-en-place relays and Restaurant Wars, grand finales and failed risottos, the series not only evinces esteem for the craft of cooking, but also broadens, and at times critiques, our definition of that craft. Now in its tenth year, the Emmy-nominated Reality-Competition Program is both the forebear of “Chef’s Table” and its more playful companion, approaching its raw ingredients with a refreshingly light touch.

The difference is not that “Top Chef” rejects celebrity chefs, strong personalities, and fanciful food—the most recent season, the series’ thirteenth, includes an actual magic show, replete with David Copperfield—but that it possesses a sly self-awareness that “Chef’s Table” lacks; it might veer, at times, into inanities—an MC Hammer-inspired Quickfire Challenge, for example—but for the most part the series confronts the classic and the faddish alike in keen, clear-eyed terms. This season, “Top Chef” reminded us that a foie gras torchon requires three days of prep and admitted that the chef-as-entertainer trope is here to stay, considered the trend of “artisanal toast” and explained how to make duck ballotine. Rather than treat the modernist arc of food’s “chic” as a fait accompli, “Top Chef” engages in an ongoing debate, as host Padma Lakshmi had it during the season finale, between “technique-forward” and “flavor-forward” cooking, and in this alone it’s rather brilliant. It’s not a statement. It’s an argument. It’s subtle, but the contestants’ and judges’ discussions this season, as ardent and articulate as ever, returned time and again to the conventions of fine dining that have emerged during the series’ decade on air, accepting none without skepticism. Mason jars are “so ten years ago,” competitor Kwame Onwuachi sneered at his unbearably arrogant teammate, Phillip Frankland Lee. A salt foam was “like spittle,” according to Gail Simmons, a Pyrrhic victory of “technique over substance.” Crudo, head judge Tom Colicchio sighed, is “the new pork belly”—lazy and unsurprising. The two finalists, winner Jeremy Ford and runner-up Amar Santana, offered a contrast between the “intellectual” and the “rustic.” And as it has throughout its run, “Top Chef” found faults and merits in each, expressing its own belief that the boundaries of “haute cuisine” need not be policed. No single series tracks the recent evolution of “serious” cooking with such precision as “Top Chef,” and none, least of all “Chef’s Table,” is as committed to testing that cooking’s most well-worn conventions.

In the end, it’s this preference for the unmannered, the approachable, that buoys “Top Chef”: The season’s loveliest moment—yes, I used “lovely” to describe a reality show—features veteran chef Hubert Keller explaining how he conceives of, diagrams, and develops a new dish, glass of wine in hand. With reference to spices and textures, it’s a paean to the sensuousness of cooking. By contrast, while there’s no doubt the subjects of “Chef’s Table” respect the natural resources and culinary traditions that inspire their extraordinary efforts, the series’ hagiographic assent to the excesses of haute cuisine—the menu written in verse, the notion that “nostalgia” is a seasoning—suggests that fine dining might be the worst sort of art form: As beautiful and inaccessible as the Mona Lisa, surrounded by gawkers and trapped behind glass.