Dan Schoenbrun explains why you'll be able to watch the SXSW hit "collective:unconscious" for free next week. 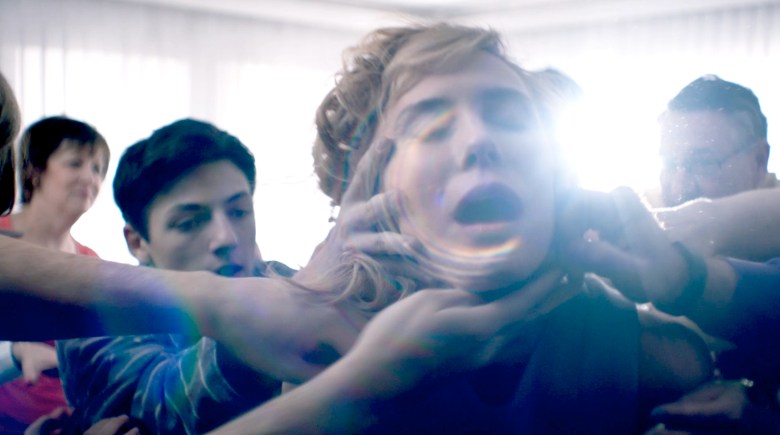 Editor’s Note: Last week. producer Dan Schoenbrun announced that he would be giving away his festival hit “collective:unconscious” for free. While the strategy may be surprising, from the start nothing about the project — in which five up-and-coming directors would adapt each other’s dreams — was particularly conventional. We asked Schoenbrun the philosophy behind giving the film away and he shared with us this essay.

READ MORE: How Five Directors Adapted Each Others’ Dreams in ‘collective:unconscious’

We premiered the movie to a sold out screenings at SXSW, where we became the first ever anthology film to play in Competition. From there, we took the film out on the festival circuit, racking up great reviews, free drinks and even the occasional distribution offer along the way. But all festival runs must end, and we’ve made the decision that it’s time to get the film out into the wider world. That’s why, on August 9, we’ll be releasing “collective:unconscious” on the internet. For Free. It’ll be available pretty much anywhere you might seek out free movies online. Plus, we’re partnering with BitTorrent on a pay­what­you­want deluxe download with enough special features that it feels like our own little DIY Criterion. But when I tell people how excited I am about this plan, they usually get a strange look on their face.

The first question they ask is almost always the same: “Why on Earth would you give away your movie for free?!”

The simple answer is this: It just feels right.

This project has always been a labor of love, and it’s always been about experimenting. During the very first conversation I had with the five filmmakers, we all agreed to make something as strange and as adventurous as possible, and not to worry about our commercial prospects. As a result, we think we’ve made something emotionally, politically and cinematically rich. We think, as Rolling Stone put it best, “‘collective:unconscious,” is “like nothing you’ve ever seen with your eyes open.”

And so now we want as many people as possible to do just that: To see it. But the truth is, that simply wouldn’t be possible if we put a dollar sign in front of it. Money is a representation of commercial value, and I’ve worked in the indie film marketplace long enough to know that realistically, our film has very little commercial value. It’s too strange, lacking the name talent and hooky premise an indie film requires these days to boost it to the top of the algorithmic listings. But here’s the thing, commercial value isn’t the same thing as artistic value. During the making of this movie, we tried our best to decouple the two. We think we succeeded in making something unapologetically weird, so why try now to fit it into a marketplace that doesn’t value weird?

Instead, we’ve decided to focus on eyeballs as our goal. We want to treat the film as a proof­ of­ concept and as a calling card: f\For five incredibly talented filmmakers who make daring, insane work. And for the concept that alternative filmmaking is still alive and well in the Internet age.

I do want to say that this model isn’t right for every project, nor should it be. Films cost a lot of money to make, and that undoubtedly results in investors needing to be paid back. The only reason we’re able to take this leap is because of our community: The backers who helped us fund this project via Kickstarter, and the hundreds of generous collaborators who gave their time to bring “collective:unconscious” into the waking world.

I’m very proud of what we all made together, and so I’m saying as loudly as possible: This film exists. I hope you watch it. I hope you adore these filmmakers’ insane visions as much as I do, and I hope you follow along as they make films that are bigger, crazier (and presumably ‘not ­free’) for years to come.

I remember back when I was a teen, watching “Mulholland Drive” for the first time in the theater. I remember my mind being blown. I remember thinking, “Movies can do that?” From day one, back when “collective:unconscious” was just an idea, that’s been my only dream for this project. Not dollar signs. Not worldwide acclaim. But some kid in a dorm room taking a chance, turning the lights down, pressing play. And maybe being transported somewhere new.