The film won best documentary at the 2016 Tribeca Film Festival and is now heading to theaters. 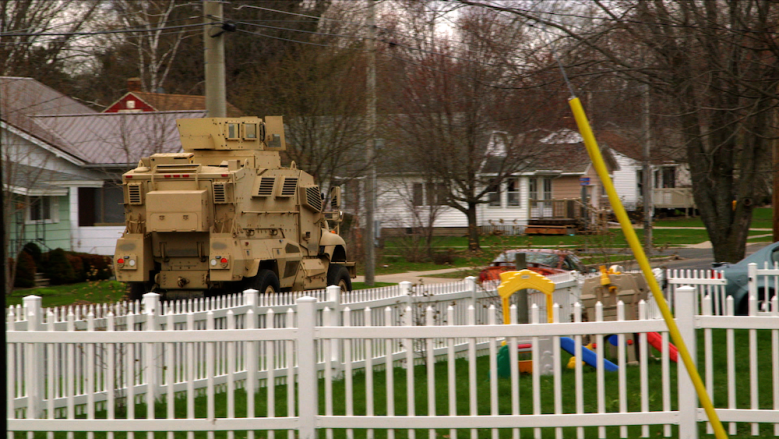 “Do Not Resist” is the 2016 Tribeca Film Festival best documentary award-winner that reveals a rare and surprising look into the increasingly disturbing realities of American police culture.

Directed by Craig Atkinson, the film hopes to change perspectives on police militarization by showing protests in Ferguson to disagreements on Capitol Hill and dissecting the current state of policing in America. After premiering at Tribeca to rave reviews, the doc is now arriving to theaters courtesy of VANISH Films.

READ MORE: Tribeca Review: Prize-Winning Documentary ‘Do Not Resist’ Will Change Your Perspective on Police Militarization

The new trailer for the Atkinson’s directorial debut captures emotional and brutal exchanges between officers and young men and women. In one scene a young Ferguson protestor and a policeman who know each other shout at one another; “I’ve known you a long time,” the uniformed man says, with the protestor responding, “And y’all still killin’ us.”

The video also demonstrates officers getting trained on how to use certain tools, weapons and how to handle riot situations. Another clip shows Sen. Paul talking about certain machinery being used in combat, “There’s actually written descriptions for how the equipment should be used and it says specifically should not be used for riot suppression.”

IndieWire’s Eric Kohn wrote in his review that, “‘Do Not Resist’ maintains a frightening contrast between the mechanically oppressive nature of law enforcement and its targets, leaving the impression of humanity getting steamrolled by unregulated oppression.”

“Do Not Resist” begins its theatrical run on September 30 at the Film Forum in New York. From there, the film will expand out to key U.S. markets including Los Angeles on October 14, San Francisco and Seattle on October 21, and additional cities including Washington, Chicago, Boston, Detroit, St Louis, Austin and others in the immediate weeks thereafter.

This Article is related to: Film and tagged Trailers