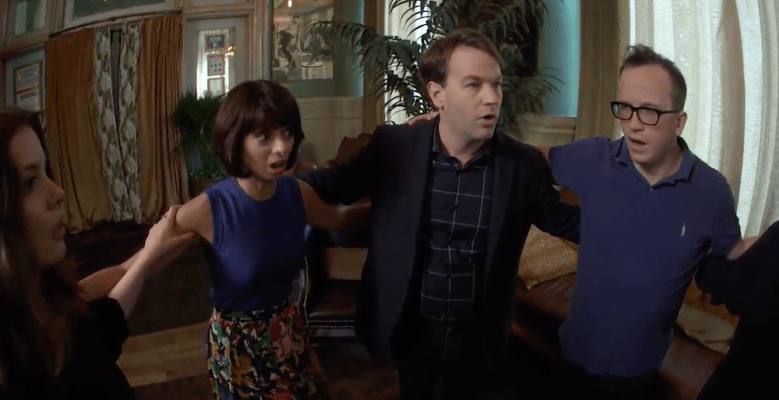 Last month Mike Birbiglia’s comedy “Don’t Think Twice” was released in theaters. The dramedy starring Birbiglia, Keegan-Michael Key, Gillian Jacobs, Kate Micucci and a slew of other comedians centers around a member of a popular New York City improv troupe who gets a huge break and suddenly the rest of his best friends in the group start to realize that not everyone is going to make it.

Now, the cast teamed up with Funny or Die to create a hilarious video where they all turn against each other after they’ve been infected with a nasty case of the Viral Video Virus.

READ MORE: ‘Don’t Think Twice’ Stars Gillian Jacobs and Kate Micucci On How to Maneuver The Wilds of Hollywood

The clip starts with the cast promoting their upcoming movie, when all of a sudden Birbiglia tells them that the producers want them to create a viral video.

“Don’t they realize that’s not how this works?,” yells Chris Gethard. “You can’t just make something go viral! You can’t will something into being popular!”

Angered by this shocking news, they all start turning on each other, making rude comments to one another.

Finally after several back and forth arguments Kate Micucci yells, “Guys, no, don’t you see what’s going on here? We’ve been infected by our producers with a special virus that makes us say the meanest things we can think of for no reason. We’ve been infected with the viral video virus.”

Unsure of what this means, they start to wonder what they can do to make everything better. So what’s the solution to getting rid of this disease? A séance, of course!

Watch the video below (which includes a cameo from our friend Adam Kersh) to see how it all goes down.