Cinematographer Crescenzo Notarile, who received a surprising Emmy nom for the Fox/DC crime series, discusses his outside the box approach. 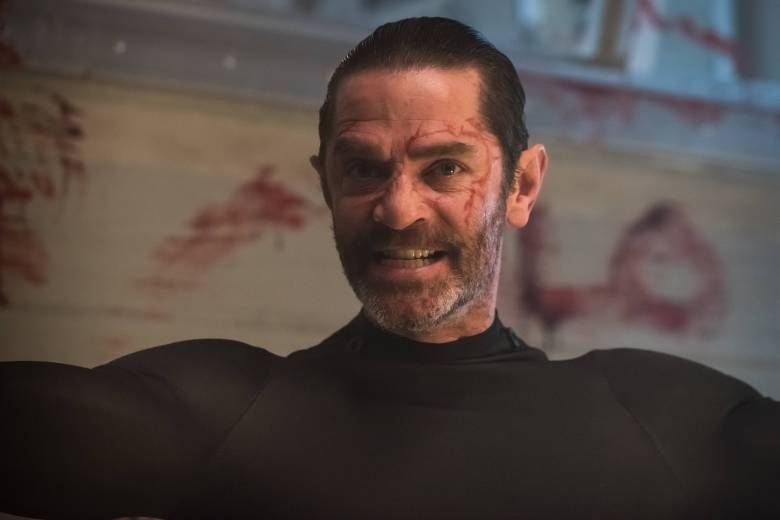 That’s because in bringing Galavan [James Frain] back from the dead as Azrael, “we got darker and had more fun,” said Notarile. Azrael then becomes a monstrous instrument to prevent vigilante ex-cop James Gordon (Ben McKenzie) from stopping Strange. He has an opportunity to redeem himself in trying to take down Strange, who was responsible for the murder of the parents of Bruce Wayne (David Mazouz), and has turned Arkham Asylum into a Frankenstein-like power trip to control Gotham.

The way Notarile shot Azrael was the antithesis of the kitschy look he gave Galavan. And because the dramatic stakes were raised in “Azrael,” Notarile could take more stylistic freedom. So he shot with the Alexa Studio Plus, equipped with Panavision Standard Prime lenses for a cinematic look.

“Now Azrael comes out of darkness, having sword fights with police,” he said. “That in itself is way over the top. What was challenging to me was when you take a main, iconic set like GCPD [Gotham City Police Department] that looks like a cathedral and all the lights go out during a blackout, you’re left with all the main lights shut off and this set is very large. And the lighting became very surgical to make it scary with characters coming out of nowhere. My main lighting was moonlight, but I had to create beams of light within the choreography of all the fight sequences.” “A lot of shows are very literal and real and you have to respect the integrity of that,” said Notarile. “You can’t get too indulgent, even if you want to, because of the particular genre and the way the script is written. But with this show you can get juicier as a cinematographer because you can think outside the box.”

Although “Gotham” doesn’t explicitly reference the evolution of the “Batman” universe, there are some nods with the choice of villains and their origin stories as well. For instance, Edward Nygma (Cory Michael Smith) will eventually become The Riddler, but in “Azrael” he’s a patient in Arkham plotting his escape. And Wayne definitely shows a fascination with the costumed, sword-wielding Azrael, which foreshadows his own destiny as the Caped Crusader.

“The asylum is a fun set because of the color patterns,” Notarile said. “I kept the colors muted, and gave the patina a green, mercury, vapor, fluorescent feel, which subconsciously gives you that claustrophobic, strait jacket [vibe]. The oculus windows  allowed me to get beams of light. It’s a very comic strip way of presenting Arkham.”

Notarile, however, shot the mystical and soft-spoken Strange with warm light: “I was much more polished with the color use in a Renaissance way— and to surprise the audience when we get to the more thrilling scenes.”

This Article is related to: Awards and tagged Below The Line, DC Comics, Emmys, Fox, Gotham