The musician makes his directorial debut with a visually stunning digital media experiment. 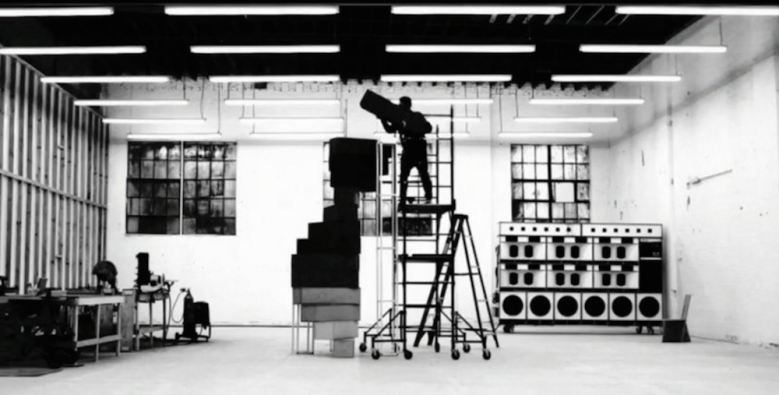 A still from “Endless”

Calling Frank Ocean’s visual album a music video doesn’t do it justice. It might be opus to creativity, or digital music sculpture, but more than anything it’s an ode to a kind of handmade art that that can only exist on a device.

Blurring lines is exactly what Ocean succeeds in doing — wresting that phrase from Robin Thicke’s creepy hands is just a bonus. The album can only be streamed with an Apple Music subscription (the free trial lasts three months) while the film plays. The captivating black-and-white images aren’t exactly a film; “Endless” falls closer to the realm of video art, something Ocean and creative director Thomas Mastorakos (who did the artwork for Ocean’s “Channel Orange”) might have conceived while perusing the work of Hollis Frampton.

Shot in a single warehouse location, “Endless” shows multiple Oceans tinkering around with power tools and spray paints, culminating in the assembly of a sculpture that suggests a spiral staircase. As the songs transition, the three Oceans change outfits, indicating multiple days of creative toiling. (One shirt reps the alt-rock band “The Jesus and Mary Chain;” another is bordered with Playboy bunnies).

The figures move about the room sawing, welding, and checking phones. The shots alter from medium to wide frequently enough to catch the eye, but don’t tell a narrative. Director of photography Francisco Soriano frames the action beautifully; pause the film anywhere and you’ll find a still suitable for framing.

With all those power tools, Ocean is clearly asserting his masculinity. Ocean made waves in 2012 when came out as gay in an open letter posted to Tumblr. The traditionally homophobic hip-hop community (mostly) embraced him. In “Endless,” he dons a welding mask as his pretty “Comme Des Garçons” chorus plays, a melodic riff repeating the name of the très-chic fashion label popular with gay men.

In “Higgs,” Ocean’s flow and unabashed sexuality would hold up against any of Drake’s rhymes: “Pray to the pipe, (fuck it) I slide deep inside/Not too deep, not too shallow, I might, full at sight/She shock full of my swipe, like a capsule so tight/With that substance you need, start a family tonight.”

READ MORE: Beyoncé’s ‘Lemonade’ is a Celebration of Black Identity

In other songs, such as “At Your Best (You Are Love),” he is sweet and soul-searching: “There are times when I find/You wanna keep yourself from me/When I don’t have the strength/I’m just a mirror of what I see.” The two Oceans onscreen mirror each other over this lyric, suggesting Ocean is speaking to parts of himself that might be hidden. This is “Endless” at its best: The music and visuals combine to invoke an often opaque feeling, namely that unnerving second when the face you see in the mirror becomes momentarily unrecognizable.

Ocean thrives in the space between remaining a mystery and baring his soul, and the surprise “Endless” release does much to fan those flames. Ocean has been largely off the map since 2012’s “Channel Orange,” and pushed the release of the now re-named “Boys Don’t Cry” many times. (That’s now expected to be released sometime this weekend under a new name.)

No doubt “Endless” is musically ambitious, ripe as it is with choral fugues and the swell of The London Contemporary Orchestra as well as the trippy power ballads and languorous banger for which he’s beloved. Musical greatness from Ocean is a given by now. But with “Endless,” the enigmatic musician swings boldly into the realm of digital art with a rapper’s swagger, “blurring the lines between still and motion pictures/Streaming life in this device.”

This Article is related to: Features and tagged Digital, Music Videos, New Media