This version of Roberto Durán's story is filled with star performances, but they all come at the expense of the fighter's oft-misunderstood story. 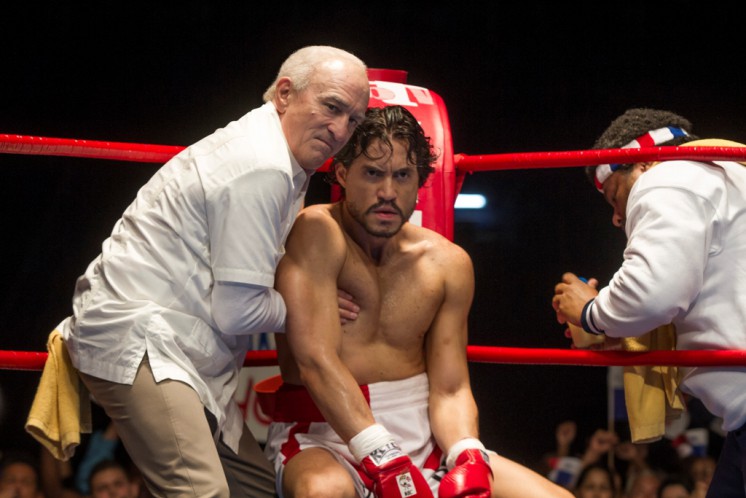 One of the biggest disservices a biopic can do to its audience is to rubber-stamp public perceptions of historical events. These films often revolve around that person’s defining moment, the first line in their obituary. In trying to squeeze a half-dozen life stories into its running time, “Hands of Stone,” the new film about legendary Panamanian boxer Roberto Durán, magnifies that disappointing mistake.

Durán, played here by Édgar Ramírez, rose to prominence in the late 1960s, after his fighting ability caught the attention of patrons within the country and trainers from without. From Durán’s childhood days through the heights of his professional career, “Hands of Stone” drags in a bevy of supporting players meant to buttress the boxer’s complicated arc, but instead pull focus at each successive turn.

Both friend and foil to Durán, down-and-out trainer Ray Arcel (Robert DeNiro) is painted as a sage dispenser of pugilistic truths. Because aphorisms are easier to digest than the finer tactical strategies of jabs and hooks, Arcel’s motivational advice carries more story weight than Durán’s oft-referenced but rarely demonstrated physical skills. (DeNiro’s distant voiceover champions Durán as an artist of an athlete before either he or Arcel are properly introduced.)

De Niro’s mere presence in the film is another unforced obstacle that “Hands of Stone” assumes but never fully reconciles. 36 years removed from Jake La Motta, here’s the screen titan opposite a shallower figure, a version of Durán that Ramírez does his best to take beyond just an antagonizer or philanderer. But after Durán’s continued missteps, as soon as his trainer steps into the frame, De Niro becomes a living reminder of what a boxing film can achieve with the laser-like focus that “Hands of Stone” can’t afford.

Any all-encompassing retelling of Durán’s life and career hurtles towards his 1980 welterweight title bout with Sugar Ray Leonard, which ended after Durán’s voluntary withdrawal at the close of the eighth round. But in building up Leonard as a worthy rival and a potential explanation for Durán’s inexplicable withdrawal, “Hands of Stone” stumbles on another attention-stealing side character. Usher Raymond IV is an ideal facsimile of Leonard’s showmanship, down to the fighter’s frustratingly nimble footwork. In and out of the ring, Raymond embodies the generation-spanning charisma that made Leonard an ideal pitchman during his career and an eventual reality show host three decades later. Rather than allow this capable ensemble to illuminate Durán’s journey as the athletic face of a nation at the height of growing political tension, writer-director Jonathan Jakubowicz curiously positions each new cast member as the film’s star. Even when “Hands of Stone” shifts to the dutiful wives (Ana de Armas as Durán’s destined lover Felicidad and Jurnee Smollett-Bell as Juanita Leonard), they become yet another fresh center of gravity to distract from Duran’s various foibles. (On top of everything, Reg E. Cathey’s one-scene turn as Don King seems like the film’s biggest missed opportunity of all. Woe to the next screenwriter who relegates King as a sideline player in a boxing drama, as Cathey joins Mykelti Williamson from Michael Mann’s “Ali” among the ranks of portrayals of the famed promoter that cry out for a film all their own.)

There are a barrage of familiar shortcuts for compressing decades’ worth of lives into easy montages: flashbulbs, headlines and news footage all support a halfhearted attempt to kindle some connection to the time period. A more confident and concise film could have found deeper meaning in the U.S.-Panama relationship that frames the two Durán-Leonard fights, but the political subtext is kept surface level, only to be drowned under a cascade of tangential subplots.

Even if the storytelling wavers from hamstrung to overstuffed, credit Jakubowicz for keeping the film from becoming visually flat. Swirling cameras capture Durán and Felicidad in their early romance and the fighter beginning to build his reputation on the streets of his home country. Even if his decision to paint a flashback meeting between Arcel and a New York fixer (John Turturro) in black and white feels unnecessary, at least it shows some creative direction.

But once the film enters the ring, the choreography stalls as it leans on familiar boxing tropes, punctuated by frantic editing that makes it nearly impossible to track the flow of any particular match. With so many punches and rounds packed into a compressed timeframe (not to mention the requisite insert shots of the bell and various round girls), it’s difficult for any of them feel like anything but perfunctory. Arcel’s pedantic lectures about what it takes to be “a real man” are meant to inspire Durán, but only come across as tired conceptions with decades of removal. In his attempt to put forth Durán as a complex, hard-to-define antihero, Jakubowicz leaves him as an apathetic star with a small, tidy redemptive arc.

All this cacophony of backstory ends up being counterproductive, especially when the film tries to convey what makes this fighter worthy of tribute (or forgiveness or reconsideration, depending on your perspective). With so much to juggle from everywhere else, it gets locked into familiar patterns that lean on reputation rather than proof of skill or character. And even after decades’ worth of observation, there’s so much inferring left to do about the relationships between him and these other fixtures in his life story’s inner circle (one of whom is summarily dismissed shortly after getting blindsided by a truck). So “Hands of Stone” ends up as a Roberto Durán biopic that makes a better case for Arcel’s superiority (and, at times, Leonard’s) than it ever does for the boxer whose nickname gives the film its title.

“Hands of Stone” opens in theaters on August 26.