The film will be released in theaters, on Demand, on iTunes, and Amazon Video on August 26th 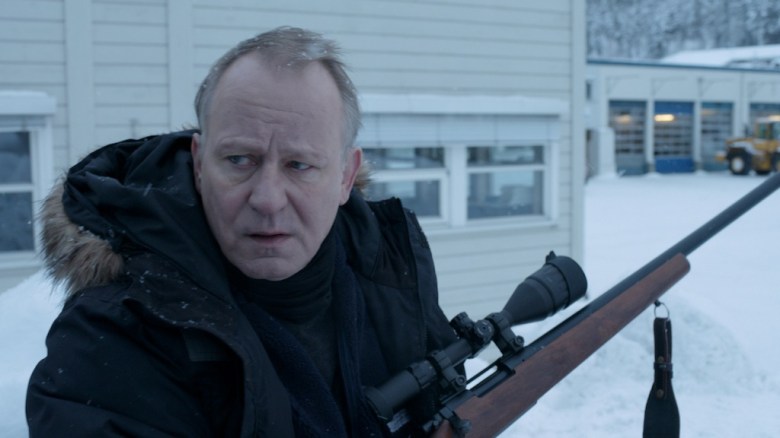 “In Order of Disappearance”

Though it might seem like Liam Neeson has all claim to avenging a child in the “Taken” series, the Norwegian action black comedy “In Order of Disappearance” proves that there’s plenty more to be mined from such a premise. Described as a cross between “Fargo” and “Taken,” “In Order of Disappearance” follows snow plow diver Nils (Stellan Skarsgård) who discovers his son has died of a supposed heroin overdose. Knowing his son was not a drug addict, Nils starts his own investigation and discovers a local drug gang is behind the crime. Soon, Nils finds the killers and the gang’s leader, but not before being caught in the crossfire between the local and Serbian gangs. The film also stars Bruno Ganz (“The Wings of Desire”), Birgitte Hjort Sørensen (“Borgen”), Kristofer Hivju (“Game of Thrones”), and more. Watch an exclusive clip from the film below.

The film is directed by Hans Petter Moland, who has previously directed such films like “The Last Lieutenant,” “Zero Kelvin,” “Aberdeen,” “The Beautiful Country,” which was produced by Terrence Malick, and “A Somewhat Gentle Man.” He has collaborated with actor Stellan Skarsgård four times. Skarsgård is best known to American audiences to for his performances in Lars von Trier’s “Breaking the Waves,” Gus van Sant’s “Good Will Hunting,” the “Pirates of the Caribbean” series, David Fincher’s “The Girl With the Dragon Tattoo,” and the “Thor” and “Avengers” films.

“In Order of Disappearance” premiered at the 2014 Berlin Film Festival. Following its premiere, it went on to screen at festivals like Tribeca, Sydney, and Edinburgh. The film will be released in theaters, on Demand, on iTunes, and Amazon Video on August 26th from Magnet Releasing, Paradox and Zentropa Entertainments.

This Article is related to: Film and tagged Hans Petter Moland, In Order of Disappearance, Stellan Skaarsgard