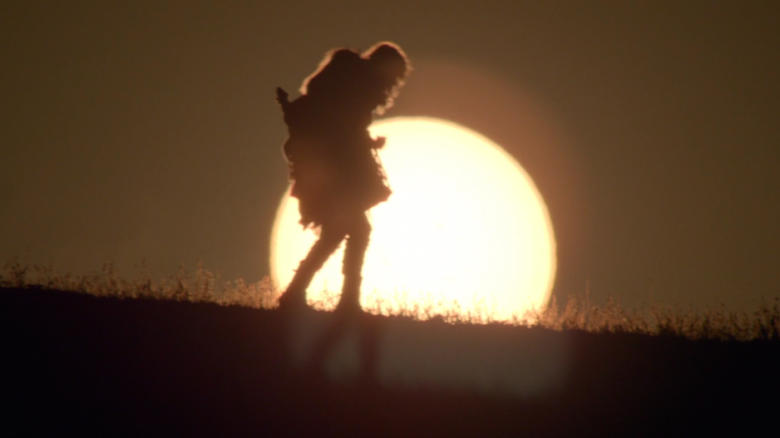 Amanda Milius says the sweeping wide-angle shot of the blazing sun in “The Lotus Gun,” her thesis film from USC, is not an homage to “Apocalypse Now,” for which her father, John Milius, penned the script. “The director of photography came up with that shot, it’s his signature,” the filmmaker recently told IndieWire.

Milius’ intimate knowledge of film – classic and cult – can be seen in every gorgeous shot of “The Lotus Gun,” which she directed and co-wrote. (She shares writing credit with Johnathan Eisenman). Set in a post-apocalyptic desert landscape, “The Lotus Gun” follows Nora (Lauren Avery) – a gun-toting, pot-smoking, anti-hero – and her love, Daphine (Dasha Nekrasova) as they survive alone in the wilderness. When a male intruder from a drug-addled commune absconds with Daphine, Nora must save the day and take revenge.

READ MORE: What Is The Best Short Film Ever Made? — Critics Survey

“I naturally fantasize about a world without society and technology,” Milius said. “That’s why I like Westerns – people develop moral codes that are not influenced by society’s rules.”

The decision to cast Avery, dubbed by L.A. Weekly as “the Instagram famous Hollywood Heiress,” highlights the contrast between the film’s apocalyptic fears with its nostalgic Western-inspired visuals. The commune’s psychedelic ritual evokes sixties cults, but the pretty faces underneath the ripped up costumes are undoubtedly Millenial.

“It’s sort of what would happen to  his generation down the road,” the filmmaker said of the characters. “They’re the children of deranged hipsters mucking around the landscape at the end of the world.”

As steeped in the future as it is, “The Lotus Gun” plays as a love letter to Westerns of old. Milius has her father to thank for introducing her to Westerns and Samurai films at a young age, and said he often played soundtrack music in the car. She cites her father’s films, such as “Conan the Barbarian,” “Big Wednesday,” and “Dillinger,” as influences.

READ MORE: A Letter To My Students About To Graduate From Film School

“In some ways I got more parenting out of his films than I did from him,” the young director admitted. “Which results in a weird situation where you’re learning your morality from these movies.”

Whether it’s that Hollywood street cred (her mother is the actress Celia Kaye) or her identification with tough protagonists, Milius was surprised when asked about sexist attitudes about female directors. “If you command authority, you command authority,” she said. “If you have a strong vision, and everybody on the project agrees, it doesn’t matter who is at the helm.”

In true Kurtz-like fashion, she compares filmmaking to war. “You’re going out into the wilderness trying to get this thing. It’s a gnarly situation, it’s a rough situation.”

“The Lotus Gun” premieres online as part of KQED’s Film School Shorts on August 9. You can watch it exclusively on IndieWire until then.