TCA: The "24" star says his new show won't shy away from its terrorism plot: "Television has a responsibility to confront what is actually happening in the world." 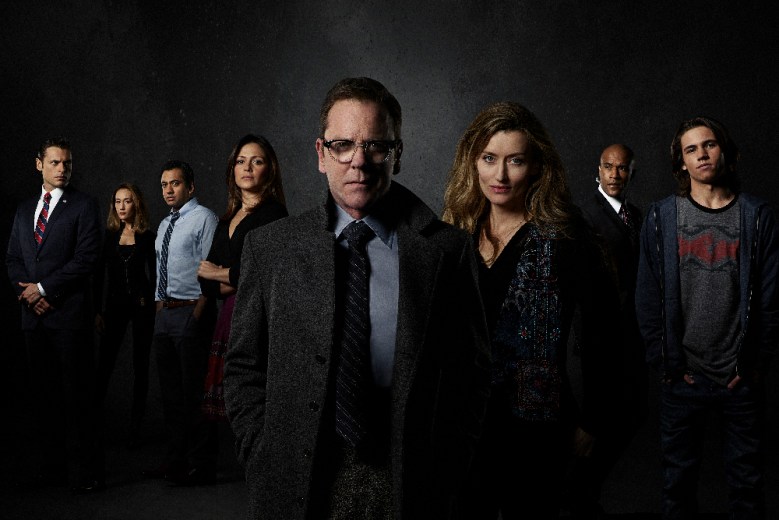 It turns out that Kiefer Sutherland and Donald Trump have more in common than just a background in entertainment.

On ABC’s upcoming political drama “Designated Survivor,” Sutherland plays Tom Kirkman, a low-level Cabinet member who is arranged to be separated physically from the President and the other country’s top leaders during the State of the Union address. (This is an actual thing that does happen every year.) When a catastrophic event kills the entire government, Kirkman as the designated survivor is then thrust into the role of President of the United States.

As with Trump’s clinching of the GOP presidential nomination, executive producer Simon Kinberg acknowledges that Kirkman’s almost Cinderella-esque ascendancy into greatness reflects a weariness with the established government.

“There is a hunger for outsider candidates,” Kinberg said at the Television Critics Association press tour panel on Thursday. “This is a guy who is not a political animal, did not lead a political life, did not go through all the machinations of a campaign. He comes to it in an innocent way. There’s a Frank Capra aspect to this.”

Indeed, the plot of Capra’s classic film “Mr. Smith Goes to Washington” almost runs parallel to “Designated Survivor,” in that an idealistic newcomer is suddenly swimming among the political sharks in DC. It was exploring this aspect that appealed to Sutherland, who hadn’t planned on returning for another series after leaving “24” — until he read the first script.

“By the end of the script, I realized I was potentially holding the next 10 years of my life in my hands,” Sutherland said. “Every situation that my character comes across can be dealt with with common sense and patience… not looking from political angles but form a more human point of view. When he makes an attempt to become political, he won’t do it so well.”

“I’m going to try and not fall down the stairs,” Sutherland quipped and later added. “FDR is where I’d like him to get to. Franklin was a very common sense president. I think he approached things in a very human way.”

That said, Washington won’t leave Kirkman untouched. “If you have someone who has a very strong perspective of right and wrong, over time as that becomes more politicized, and Congress and Senate [repopulate], that can chip away at someone’s commitment in what they believe.” Kirkman could become the person he never wanted to be: the consummate politician.

“Designated Survivor” encompasses several types of shows. Kirkman’s trials in leading a nation is most similar to “The West Wing,” according to executive producer Jon Harmon Feldman. It also has aspects of “House of Cards,” with the intrigue and deal-making behind the scenes, and a “Homeland” aspect in trying to figure out who is behind the catastrophic attack that put Kirkman in such a position in the first place.

Despite today’s tense atmosphere regarding recent terrorist attacks worldwide, the series will not shy away from its storytelling. Executive producer Mark Gordon said, “We’re not sensationalizing it. Our catastrophic event happens in the first episode, and then we’re dealing with it afterwards. We’re not using the spectacle of this horrible thing that happens to promote a singular episode of television.”

“Television has a responsibility to confront what is actually happening in the world than to tell it post-tense,” added Sutherland. “Even in ’24,’ there would be very few circumstances, even after the terrible days of 9/11, we did not push the show back. I don’t think any of us could imagine a circumstance that would prevent us from confidently putting the show forward.” The series also marks a shift for Sutherland, who went from take-charge counter-terrorist agent Jack Bauer to becoming the man who is now protected by agents. “I’ve never felt so short on a show in my life,” Sutherland said. “It’s interesting. In the second or third scene, LaMonica [Garrett], who plays the Secret Service guy, he’s huge and running in and taking my cell phone [to protect me]. I can’t help but remember enjoying doing that on ’24.’”

As for what President Tom Kirkman would think of Jack Bauer if he were faced with the agent? “[He’d think,] ‘Good-looking guy! I really should lose the glasses,’” said Sutherland. “Jack Bauer as a character had incredible conviction and a real moral compass… I would believe that [Kirkman] would trust him.”

“Designated Survivor” premieres on Wednesday, Sept. 21 at 10pm on ABC.

.@RealKiefer is a president who defies convention. #DesignatedSurvivor premieres Wed, September 21 at 10|9c on ABC. https://t.co/09Kf0BuVVv

This Article is related to: Television and tagged ABC, Kiefer Sutherland, TCA 2016