In just six years of feature filmmaking, Teller has built himself one of Hollywood's most enviable careers. But what does he really want? 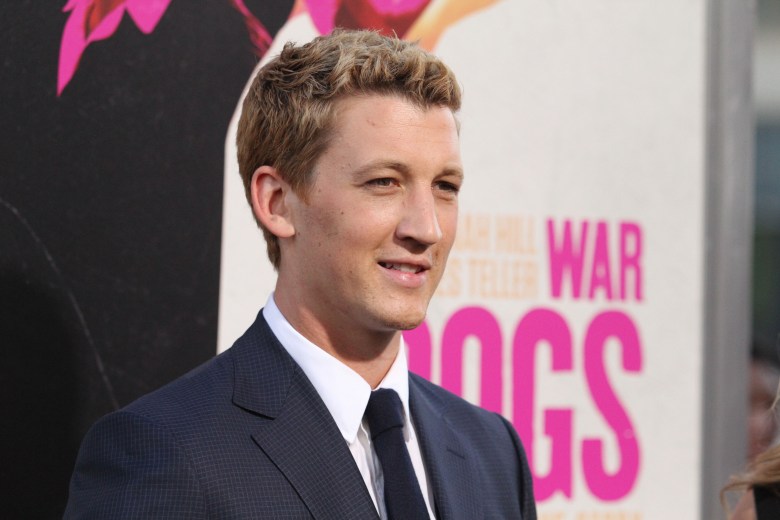 Miles Teller is blonde now. The “Whiplash” and “War Dogs” star is currently sporting a mop of electric yellow hair, courtesy of Joseph Kosinski’s currently filming “Granite Mountain,” which casts Teller as a firefighter tasked with battling a wicked Arizona wildfire back in 2013. For Teller, it’s the next big step in a seemingly ever-evolving feature film career that, less than a six years in, already contains starring roles in festival favorites, Oscar contenders, superhero franchises and bawdy comedies.

In Teller’s newest feature, the Todd Phillips-directed “War Dogs,” the actor again changes direction, thanks to an action comedy that casts the actor alongside Jonah Hill as a pair of unlikely arms dealers who get in over their heads when they attempt to close a big deal with the U.S. government. But although the film has all the hallmarks of a Phillips film – namely, it’s about some ill-advised bros who get into some serious mayhem – it’s a departure for the director, blending Phillips’ usual comedy with some unexpected dramatic pathos (and a hefty dose of love for “Scarface”). And for Teller, whose versatility and range is often overlooked, it’s just another role that allows him to show off his abilities in a new way.

“I was excited to play the straight guy who actually has more of a moral compass,” Teller recently told IndieWire of his role in the film as David Packouz. “Those aren’t always the parts you’re getting. It’s rare to get a script for [roles for] guys in their young twenties that are actually doing things with big responsibility or a more mature tone.”

“You’ve Got To Put Me In This Movie”

In the film, Teller’s Packouz gets into arms dealing – and, yes, this really is based on a true story – when his former junior high school best friend, smooth-talking Efraim Diveroli (Hill), invites him to join his small potatoes outfit, which sells relatively minor arms contracts to the U.S. government. Their tiny operation soon rapidly expands, as does their hunger for their next big sale, and David and Efraim eventually find their lives spinning out of control as they plunge ever deeper into a vicious world they’re not exactly meant to populate.

Teller readily identifies himself as a huge fan of Phillips’ films, from “Old School” – “one of my favorite movies,” said the actor – to “Road Trip” and “The Hangover,” and actively pursued the role once he found out that Phillips was set to helm it. “My dad actually sent me the article when he saw that Todd’s company had bought the rights to this story,” Teller said. “He sent me an email saying, ‘You’ve got to tell Todd to put you in this movie.'”

Teller had previously worked with Phillips on the 2012 film “Project X,” which Phillips produced, which is probably why the confident Teller felt so comfortable literally asking Phillips for the role in the film, then titled “Arms and the Dudes,” the next time he saw him.

“I saw Todd at a restaurant like a couple of months after that,” Teller remembered. “And I walked up to him and I was like, ‘Hey, man, what’s up with ‘Arms and the Dudes’? Like, you’ve got to put me in this movie.”

For all his braggadocio, Teller doesn’t boast when he recounts the story. And, when it’s time for some sort of snazzy punchline, there isn’t one, just Teller shrugging, “It worked out okay.”

Production on the film kicked off at the perfect time for Teller, right after finishing up a physically punishing and emotionally dazzling role in Ben Younger’s upcoming boxing drama “Bleed For This.”

“It came at a time where I’d just finished playing this boxer, Vinnie Pazienza, a very flashy Italian American world champion boxer who had like Muhammad Ali qualities in terms of his ability to talk and the way he dressed, ” Teller said. “He was just very flashy. I wasn’t looking for a big kind of bravado character. I didn’t want to do that.”

Teller doesn’t seem to take these kind of opportunities lightly, and he recognizes that doing so many different kinds of movies might actually work against him when it comes time to try something new.

“For a lot of the projects I’ve done, it’s taken some foresight and some faith by the director,” Teller said. “When Ben cast me in ‘Bleed For This,’ I think I was just coming off ‘That Awkward Moment’ or something where I’m literally the pale, goofy friend. I don’t think many people had me on a short list to play a five-time world champion Italian boxer.” And that might be what’s fueling Teller most of all, that drive to prove himself again and again.

“I think most actors do feel they can do everything,” Teller said. “They feel like they kind of get pigeonholed and they feel helpless. I do think that people are a little too quick to critique young actors based on their choices. It takes a long time before you get a lot of choices. For the most part, you’re just trying to act, you’re trying to have a substantial part in a movie or you’re trying to work with a certain director.”

That desire appears to have taken hold of Teller early, who shared a story of being something of a class clown when he was in high school, a label that worked against him when he tried his hand at more serious fare.

“I remember I was in class and I was doing something that was supposed to be serious, and everyone was just laughing, and they weren’t taking me seriously,” Teller said. “That obviously pissed me off, because I’m still talking about it. It pissed me off that I was just like a joke and that I wasn’t in control of my own work or my own kind of image.”

Even now, Teller still prefers roles that offer him a chance at turning up the dramatic fireworks. Between “Bleed For This,” “Granite Mountain” and his part in Jason Hall’s PTSD drama “Thank You for Your Service,” the rest of Teller’s 2016 is stacked with meaty roles that are about as far removed from films like “That Awkward Moment” and “Project X” as cinematically possible.

Given Teller’s rise in the industry, it’s no big surprise that his name has often turned up on so-called short lists for major properties, including the recently announced young Han Solo movie, which will feature Alden Ehrenreich as a twentysomething take on the beloved “Star Wars” smuggler. Before Ehrenreich locked the part, however, it was Teller’s name that most often topped lists of Han Solo contenders. And while the actor said he didn’t know he was even in contention for the part until news stories started trickling out, he does admit he auditioned for the role.

When asked if he was bummed that he didn’t land his very own “Star Wars” standalone film, Teller thought for a moment. “No, I’m not,” Teller said. “I remember the first project that I was legitimately bummed about. The first thing that I thought I was going to get and I didn’t and I was bummed out was ‘The Descendants.'”

Teller read for the role of Sid, the stoner boyfriend of Shailene Woodley’s character, going so far as auditioning for director Alexander Payne, before being beat out by Nick Krause. Even though the memory still stings – he must be sad about it, because he’s still talking about, to paraphrase Teller – the actor has a relaxed attitude towards how things panned out.

“I do really believe like everything happens for a reason,” he said. “I believe that in life, I also believe that in the acting world. Who knows, man, if I would have got that, maybe they wouldn’t have wanted to cast me in ‘Spectacular Now.'” Teller, of course, landed that part opposite Woodley just two years later, resulting in James Ponsoldt’s wonderfully emotional teen drama.

Teller’s attitude towards the vagaries of life and movies also applies to the projects that haven’t worked out, particularly Josh Trank’s critically maligned box office bust, “Fantastic Four.” Teller starred in the 2015 superhero outing as Reed Richards (a.k.a. Mister Fantastic) alongside other talented young stars like Michael B. Jordan, Jamie Bell and Kate Mara for Trank’s much-hyped first post-“Chronicle” outing. The film was savaged by critics and widely rejected by audiences.

Teller doesn’t have much hope for a future critical reevaluation of the film, but he also doesn’t seem too bothered by it. “Some of my favorite movies were not the best critically received,” Teller said. “When ‘Scarface’ was in theaters, it bombed and Al Pacino didn’t get any kind of attention for that. It’s out of your hands. Obviously it doesn’t feel good when a movie you do gets panned pretty much all across the board. It’s not a great feeling. At the same time, you want to make the fans happy and I’ve had a lot of people come up to me saying they really enjoyed what we were going for with that film.”

Consider it just another notch in Teller’s belt, a new experience, another way to prove himself. After all, for Teller, it all comes down to one simple aim: “I just always wanted to be versatile.”

“War Dogs” is in theaters on Friday, August 19.

This Article is related to: Film and tagged Interviews, Miles Teller, War Dogs