If only it had a brain! 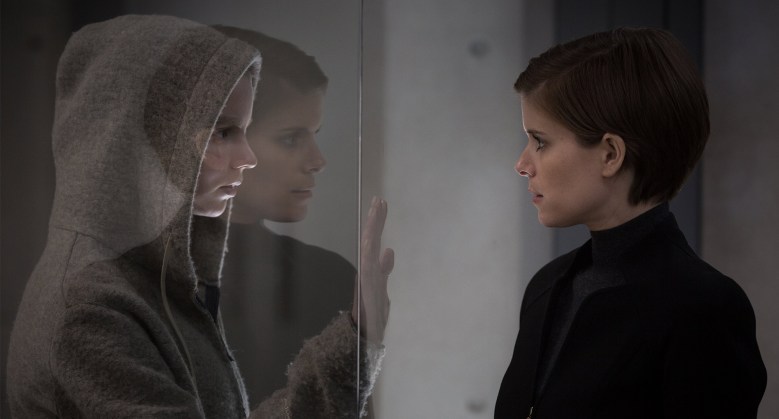 No one in Luke Scott’s “Morgan” acts like a human, which is fine enough for some of his characters — after all, this is a film about a genetically engineered being run totally amok — but becomes slightly more problematic once the film attempts to dig deeply into themes relating to human emotion, human behavior, human fallibility…the list goes on and on. “Morgan,” for all its ambitious sci-fi trappings, is really a film about how being human is hard and messy and weird, a message that’s difficult to deliver by way of wooden lines, worse delivery and a series of cheap, gotcha! “twists” that do its audience no favors.

Lee Weathers (Kate Mara) is something of a fixer — a “risk management consultant” for a shady corporation who seems to only be dispatched when things have already gone way past risky (mention is made throughout the film of some sort of incident that happened in Helsinski, one of the few genuinely tantalizing tidbits to make its way into the final film). Her latest job seems to be just the kind she likes:  a hard one that hinges on her staying stone-faced, opaque and exceedingly rigid.

Somewhere in the Pacific Northwest, a project dedicated to the creation of a humanoid being made of synthetic DNA (for what? for who? who knows!) has veered terribly off-course, with Morgan (Anya Taylor-Joy), the latest version of the so-called “L9 line,” going certifiably bonkers and stabbing out the eye of one of her most cherished creators (Jennifer Jason Leigh). To Scott and screenwriter Seth W. Owen’s credit, all of this information is introduced quickly and cleanly, by way of surveillance footage that shows the full scope of the attack and a zippy trip to the location by Lee that’s overlaid with information-packed voiceover that helps lay out the situation at hand and Lee’s role in it. That fast start, however, soon grinds to a halt once Lee lands in an appealing forest location that hides some major secrets. Despite the horrific inciting incident that has resulted in Lee’s appearance, most of the members of the typically motley crew of doctors and scientists (and also Chef Skip, played by Boyd Holbrook, who is the only character who seems to have even the most believable shred of common sense) adore Morgan, a being who has been raised in the relative idyll of the remote lab for five years. Even when Dr. Grieff explains to an unmoved Lee that Morgan had “joy in her heart” as she repeatedly stabbed and swatted at her eye during a seemingly benign visit, she remains committed to the being she helped bring into the world. She’s not the only one with a soft spot for Morgan, as behaviorist Amy (Rose Leslie), a character who seems entirely crafted from the idea that “she’s a behaviorist, but man, does she behave badly!,” exhibits a sexually charged affection that’s just one of many uncomfortable aspects of this ham-fisted script.

Chalky-skinned and blue-hued, Morgan (a “she” to everyone, an “it” to Lee, who refuses to acknowledge Morgan as anything but an invented thing) sulks around her glass-walled cell (someone watched “Ex Machina,” it seems) listening to blaring opera and looking at turns deeply sad and genuinely disturbed. It’s Lee’s job to figure out if the reward of Morgan is worth the risk of whatever she may do next. While the reasons for Morgan’s creation are never made explicit — like so much of the film — it’s safe to assume she was made to hurt people, so that Lee would struggle to weigh her options is understandable, though that struggle is never articulated in satisfying ways.

Instead, “Morgan” is intent on letting Lee and its eponymous character attempt to outfox each other in a series of unsurprising and fairly obvious “twists.” The film mistakes stiff, literally buttoned up acting — you’ve never seen so many starched and fully done up dress shirts in one film in your entire life — as somehow being clever, but there’s scarcely a moment of “Morgan” that is genuinely shocking (though the undercurrents with Amy are at least unnerving). A series of final act fight scenes look more like half-speed rehearsals than anything even close to actual danger, providing an unexpectedly keen commentary on everything else that has come before. As Morgan grows still more violent — though there’s never a moment in the film where she seems anything less than nefarious and out of control, even when she’s relaxing underneath her omnipresent hood during a flashback trip out of the cell, she looks ready to maim everyone around her — Lee grows more measured. And everyone else? They grow more delusional, convinced that they can save Morgan, when they really need to worry about saving themselves. Even a brief visit from a cynical psychiatrist played by Paul Giamatti (who, like everyone else here, is far too good for any of this) that ends in carnage can’t sway the dumb humans who so adore the monster they’ve created.

“What is Morgan?” the film’s marketing campaign has been asking for weeks. Turns out, “Morgan” is just another sci-fi film that’s only engineered to disappoint.

This Article is related to: Film and tagged Kate Mara, Morgan, Reviews