Not unlike the brilliant vigilante hacker he plays on Emmy-nominated series "Mr. Robot," Rami Malek rides high-charged emotions to fuel his work. 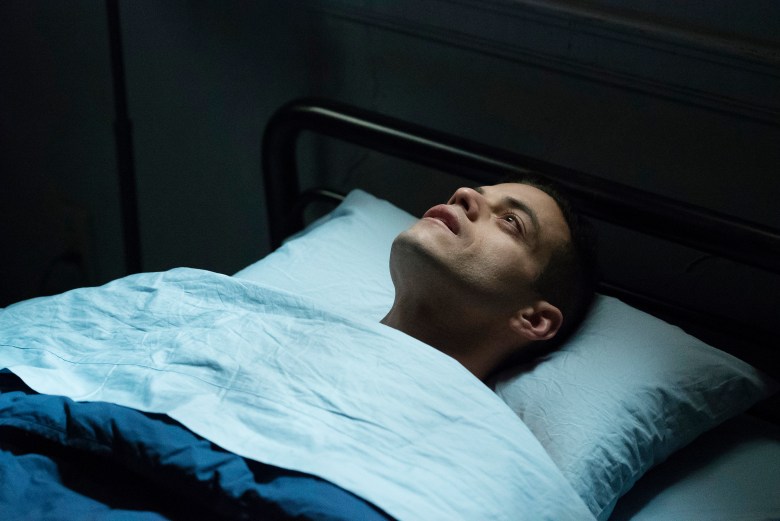 Rami Malek is in Emmy mode.

The “Mr. Robot” star just flew back to the States from London for a fitting with a stylist, an appearance on “The Late Show with Stephen Colbert” and a visit to the Television Critics Association Awards (where his USA Network series was named best new series).

What’s more, he’s got a new movie to prep: Malek will play the Dustin Hoffman role in a reworking of John Frankenheimer’s 1974 prison-break classic, “Papillon.”

This actor doesn’t agree to do just anything – he sets sky-high standards for himself. That’s how Malek broke through the noise on Sam Esmail’s innovative paranoid psycho-thriller “Mr. Robot.” The drama seemed to come out of nowhere, but quickly collected so many nominations and awards (Golden Globes Best Drama Series, Peabody, Critics Choice, AFI Ten Best TV, Gotham Breakthrough) that six Emmy nominations seemed inevitable.

“Mr. Robot” scored nods not only for Outstanding Drama series, but for Malek as Best Actor (competing with the likes of Kyle Chandler, Kevin Spacey and Liev Schreiber).

Amazingly, Malek has a real shot at the win.

We talked on the phone about his role as the lonely vigilante hacker Elliot Alderson, a complicated protagonist who battles morphine addiction, anxiety, and fantasy characters in his head. Rami Malek: Emmy had seen me in the HBO show “The Pacific.” Casting at NBC or USA would have a different opinion on how I walked in that door.

You and Esmail both come from Egyptian families?

We didn’t figure that out until later after a few auditions. It’s rare that that happens. It’s not the reason why he brought me in. I didn’t think he knew that, nor did I.

How did you feel about playing an Egyptian king in “Night at the Museum”?

That’s one of the first roles I ever had in the business. I was young and eager to be in my first big studio movie. It was from Fox, with Ben Stiller at the helm and Robin Williams. I said:  “This is going to be fun, I’m going to get paid to do it.” I didn’t think about it.

What did you read going in for the “Mr. Robot” audition?

I only had the “Mr. Robot” pilot when I first sat down. I second-guessed that decision, but then I read it and thought, “This has something aggressive and bold to say, it could be powerful if done right, let’s go and meet the filmmakers behind it.”

You are tough on yourself.

Ultimately I am too tough—I don’t know—I live with my anxiety and fears and want to do something special with my work. Sometimes I’m not satisfied unless things are as good as they can be. Sometimes things are out of my hands. I can’t control everything. Some things I can. That will get you every time! I never want to look back on performances where I could have done more, said this or that.

Maybe you were perfect casting for Elliot Alderson!

When I go to bed, I’ve lost sleep as an actor, things I wish I had back. I just try in the moment to give everything I possibly have and that way I’ll rest a little easier—when and if I get to sleep! I’m in better shape than Elliot—I get a paycheck for doing the job I love.

In one round-table interview all the men talked about working with directors, all “he” and “him.” You added, “she.”

I was surprised by the assumption that every director encounter would be male. These men must have had the other gender directing them at some point. I didn’t want to sit there and perpetuate the idea that this is the way the business works when there are so many talented women directors. I hate saying it, it’s a weird polarizing thing to say: a director is a director to me. I’d love to work with some women directors again. I found it weird not to acknowledge that it could easily be a woman, it has been for me. I’ve had performances that have been pulled from me from women and men. I look forward to working with more women. May the best person win. It’s foolish to assume that you’re just going to be directed a man. Did you see Darren Aronofsky’s “Pi” before you started working on “Mr. Robot”?

I asked Sam when we started what films he would recommend that would shed a little light in terms of what he was going for here, what level of paranoia. He was a big fan of the 70s paranoia films – he talked a lot about “Taxi Driver” as a reference, and Aronofsky came up quite a bit, as did Fincher from a character point of view. I watched “Pi,” I had seen a little of it. I don’t know why I didn’t sit through it, maybe it was too paranoia-inducing for me, on a day when I had enough anxiety to deal with. So for the show I sat down and watched it and it was very informative—just to see the levels as an actor, how physically and mentally paranoia can alter your performance, how big you can be with it. Being anxious or paranoid can be a little grating when watching it as a viewer. I worked with Elliot on how far I could take his anxiety and paranoia before it got to be too grating or aggressive.

Your wide eyes invite the viewer in; Elliot is accessible.

I wanted that to happen. This part gives you so many reasons not to like him. You never want to look at it from the point-of-view that the audience has to like him. I watched Walter White and Don Draper—many other characters who you root for who were not the most morally just human beings. But there are times I try to imbue Elliot with a sense of vulnerability and earnestness. There is a strong moral center at his core. I try to access when the moment comes when you have to curb the audacious and disturbing things he ends up doing.

You have Sam Esmail as the writer-showrunner on “Mr. Robot,” but how did it feel to have so many different directors? Did you have to take responsibility for keeping the performance grounded? I’ve had Sam direct every episode this season to help calibrate a more focused performance. I always anticipate the director to come on a TV show—some are coming in and punching the clock, luckily we didn’t have any of those. The only way to prepare for that is to do as much work ahead of time as possible. Sam told me when we started:  “You know this character better than I do. When you have to justify yourself to a director or another actor, don’t be afraid to step out there and take charge. We’ve had enough discussion about the show and the arc of the character and the story to this point that you are fully capable.”

How many scripts did you read when you started? How much did you know about where the season was going?

Sam and I talked when the shoot started that first season, so I knew where the character was going. I didn’t know the trajectory of the entire show, I knew the main storyline, I had four-five scripts before we started shooting the second episode after the pilot. It was the same this year, before we were starting the second season, I knew where the story was going from the beginning for my character. There were moments when I had a lot of questions on why we were going in this direction. It’s very rare in TV to sit down with the creator of the show and have discussions as to why and where we were taking the direction ahead of shooting the entire season. Within a month later I had all the scripts at my disposal, 8 of 10 were written before Sam started directing: in true Sam fashion he delivered all of them.

I loved David Lowery’s “Ain’t Them Bodies Saints,” in which you had a small role. Why do that one?

We’ll work together again for sure. We had talked about playing different roles but things didn’t work out, so I came to do a couple days, yeah. I had talked to him, I knew what he was about, that was what I saw on set with him: he’s very talented. He will wind up making some important movies in the future. Those are the guys I want to work with, like Michael on “Papillon.” How do you feel about playing a role that was originated by Dustin Hoffman?

I love Dustin Hoffman in “Marathon Man” and “Rain Man.” “Papillon” I saw as kid with my Dad. The visuals stuck with me. I was apprehensive, but Michael Noer is a unique director. Working with Sam [Esmail], I like to surround myself with guys who are at the top of their game. I look forward to working with Charlie Hunnam, as dedicated as he is. It’s a special script, all the forces are collaborating and colliding together for a special film. It’s not a remake, it’s more of retelling —at least, that’s the aspiration.

What else do you have coming up?

I have an indie feature, “Buster Mal Heart” directed by a woman, Sarah Adina Smith. She’s talented, she will be thoughtful and provocative.