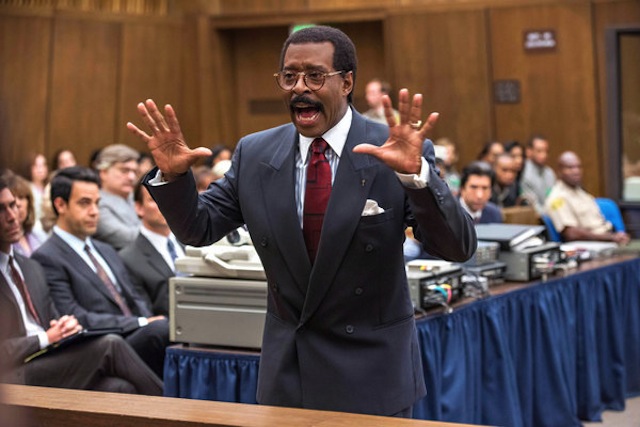 Movie producers Nina Jacobson and Brad Simpson are pinching themselves. They know that you don’t usually jump into television for the first time and emerge with 22 Emmy nominations. Not to mention an ongoing anthology series—they’re developing more seasons of “American Crime Story” on FX.

What did they do right? Well, for one thing they didn’t know the rules—which made the ten-part “People v. O.J. Simpson: American Crime Story” series impossibly tough to execute in 110 days. They had the sense to make a television deal with FX, optioned New Yorker scribe Jeffrey Toobin’s 1996 non-fiction book, “The Run of His Life: The People v. O.J. Simpson,” hired A-list screenwriters Larry Karaszewski and Scott Alexander (“The People vs. Larry Flynt”) as lead writers,  and eventually partnered with television veteran Ryan Murphy (“American Horror Story”) who taught them what they needed to know.

When I arrived at the Color Force bungalow on the Fox lot, Jacobson and Simpson were embedded in the writers room, as many of their “O.J.” team are beavering away on scripts for their next “American Crime Story,” “Katrina.” The series’ second edition delves into the many oversights, mistakes and tragedies surrounding Hurricane Katrina in August 2005 in New Orleans. In their office, the producers turned over bulletin boards and hid stacks of true crime books in an attempt to keep them from my prying eyes.

“We developed one season of TV,” said Jacobson. “We had written the story, and when we partnered up with Ryan, our one season became the first season of the anthology ‘American Crime Story.’ I’m intimidated now. It feels like a big struggle to live up to the unbelievable highs of this experience.”

What has always worked for ex-Hollywood production execs Jacobson and Simpson, who are canny developers of commercial screenplays, from the “Diary of a Wimpy Kid” series to “The Hunger Games,” is to focus on character. “The shows that we love are about characters we love,” said Jacobson. “So every ‘OJ’ episode is seen through the prism of character, every character had the legs in their story that carried you through 10 episodes. We’re trying to work with great writers and put loads of time into character.” The unifying thread for both “OJ” and “Katrina” is engaging the audience in a sense of guilt. “We found that what makes an interesting ‘American Crime Story’ is one that America is guilty of,” said Jacobson. “When we find our own culpability as a country and a culture, those stories inspire us to dig deep, provided we have characters strong enough to carry us through.”

They recognize that finding another Trial of the Century is impossible. “We’re not interested in the emphasis on true crime that can be tawdry,” Jacobson said. “Tragedy as entertainment is not the purpose of what we hope to do. So each season will be different. None will be like ‘O.J.,’ because it’s an extraordinary crazy crime, in which everything America’s obsessed with was colliding in one case that the entire country and the world watched. We’re never going to come up with something like that. But we’re looking for complex stories with rich characters.”

For Simpson, what works is “defining crime broadly. It’s about something in America with underlying tension. In another period, people were interested in justice and ‘Dragnet’ and law and order. Now people are obsessed with injustice, like ‘Serial’ and ‘Making a Murderer.’ Like ‘O.J.,’ they’re interested in something that’s broken in the justice system.” In some ways Simpson and Jacobson see “Katrina” as like an O.J. moment, in the sense that “you’re holding up a mirror to the country, and what you see is not what you thought you were as a country,” said Jacobson. “During Katrina there were great acts of heroism— and neglect.”

The challenge for the producers on “The People v. O.J. Simpson” was to find a way to unify the look and feel of the series across three directors (Ryan Murphy, Anthony Hemingway, and John Singleton, two African-American, all nominated) and five writers (two African-American; all nominated). Their touchstone: the ’70s films of Sidney Lumet, from “Network” to “Dog Day Afternoon.” “They had a satirical and dramatic quality,” said Simpson. “‘Network’ was the Northstar in terms of ’70s design and mid-century modernism. The courtroom looks like an Alan Pakula film.” Simpson and Jacobson admit now that their inexperience showed in the ambitious writing, made up of more short propulsive scenes featuring some 200 characters on multiple locations —homes, offices, courtrooms—than is usual in efficiency-targeted television. It required more moving around and was extremely tough to deliver on schedule.

It was also unusual to have 200 people, from top-level actors to extras, sitting in a courtroom day after day, as multiple cameras shot great speeches and loads of tiny reaction shots from the likes of Courtney Vance as the artfully eloquent lawyer Johnny Cochran to David Schwimmer as the tortured loyal Simpson friend Robert Kardashian, who rarely had any speaking lines, but whose expression revealed his mounting doubts. That too made the series more dramatic. “They were sitting during each take watching each other perform,” said Jacobson. “It was like being in theater.”

READ MORE: ‘The People v O.J. Simpson’ Cast and Crew Prepare for the Verdict (and the Tragedies Behind It)

The series deliciously reveals how much the audience watching the trial did not know, from the divorce pressures on Marcia Clark (Emmy frontrunner Sarah Paulson) to the ways her flirtatious partner Christopher Darden (breakout Sterling K. Brown) was perceived by his community when he was sincerely trying to prove Simpson’s guilt.

It was Murphy who decided in the editing room that “The People v. O.J.” could be shaped as an edge-of-your-seat thriller. Central to the mystery was the character of football icon Simpson himself, charismatic yet opaque, and always savvy about how to appear in the public eye.

In casting Simpson, “the most important thing was his likability,” said Jacobson, “the impossibility that he could have been guilty according to anyone who knew him. He was a friendly, outgoing, charismatic guy who had star wattage that was irresistible. Cuba Gooding is spot on —we knew he did not have a strong physical resemblance, but that essence was more important. The physical differences would start to disappear. Cuba brings likability and opacity: ‘What are those tears about?’ It’s complex! You don’t know what he’s thinking in a way that suited the character.”

In the end the producers saw most of what they wanted included in the series’ ten one-hour episodes, although they do recommend seeing the full five-part ESPN “O.J.: Made in America” documentary if you want to dig into the details of say, Barry Scheck’s decimation of the crime scene. They do miss the sequence where Simpson attorney Robert Shapiro (a smarmy John Travolta) is loudly hissed at his synagogue on Yom Kippur —on the day of the Simpson “not guilty” verdict. It just didn’t fit into the arc of the final episode.

Next up: Color Force has not left the movies; they’ve hired director John Crowley for Peter Straughn’s adaptation of Donna Tartt’s “The Goldfinch” at Warner Bros., are waiting for Richard Linklater to become available for another literary film, Annapurna’s “Where’d You Go, Bernadette?” with Cate Blanchett attached,  and John M. Chu (“Now You See Me 2”) is directing another film version of a popular book, “Crazy Rich Asians,” which Simpson and Jacobson promise will be “cool and subversive.”

Stay on top of the latest TV and film news! Sign up for our email newsletters here.

This Article is related to: Awards and tagged "The People v O.J. Simpson", Emmys, Nina Jacobson