The series' second season will premiere on September 20th. 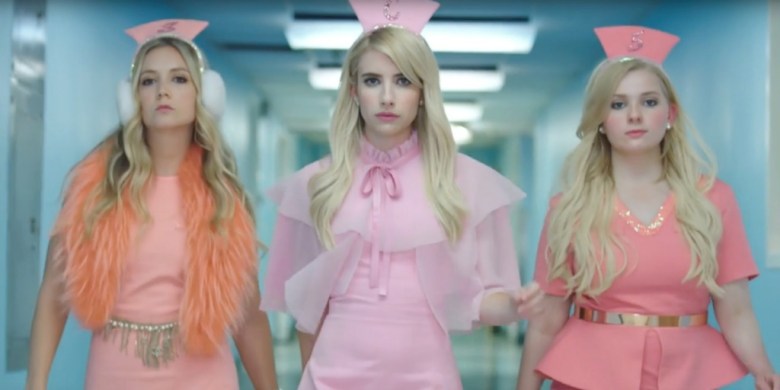 Though his breakthrough series’ “Nip/Tuck” and “Glee” have long since left the airwaves, Ryan Murphy still reigns over much of television with “American Horror Story,” “American Crime Story,” which just finished its premiere season about the O.J. Simpson trial, and the satirical horror series “Scream Queens,” about a college campus threatened by a serial killer who targets the members of the Kappa Kappa Tau sorority. The series stars Emma Roberts as Chanel Oberlin, the narcisstic leader of the sorority, as well as Jamie Lee Curtis as Dean Cathy Munsch. Check out the punny new trailer for the series’ second season, featuring new faces like John Stamos (“Full House”) and Taylor Lautner (“Twilight”) walking jauntily with Curtis before coming upon the snarky Roberts and her cohorts Abigail Breslin and Billie Lourd.

Emma Roberts first rose to prominence as the star of the Nickelodeon series “Unfabulous.” After the series ended in 2007, she followed it up with a series of films, including a “Nancy Drew” movie, the comedy-drama “It’s Kind of a Funny Story,” the indie comedy “Adult World,” and the drama “Palo Alto.” She most recently starred in the survival thriller “Nerve.” Meanwhile, Jamie Lee Curtis is best known for the horror roles early in her career, like John Carpenter’s “Halloween” and “The Fog,” along with “Prom Night” and “Terror Train.” She also appeared in films like “Trading Places,” “A Fish Called Wanda,” and “True Lies.”

The second season of “Scream Queens” will premiere on September 20th.