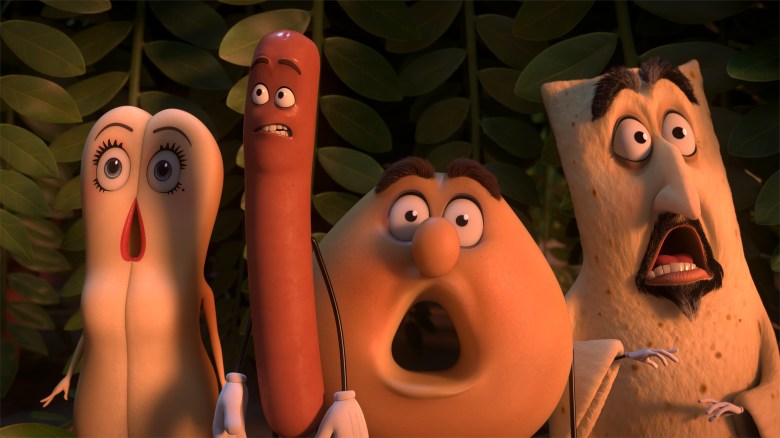 “One of the biggest reasons I wanted to do this was for the industry itself, just to be able to knock down the door and prove that R-rated animation has an audience,” admitted director Conrad Vernon, who first met Rogen as a voice actor on DreamWorks’ “Monsters vs. Aliens. “It just depends on how you tell the story and we think animation’s not just for families and kids and that it’s a medium and not a genre.”

Vernon has been aching to do an R-rated animated comedy ever since he saw Ralph Bakshi and “Heavy Metal.” He wound up working on Bakshi’s “Cool World” in ’92 with “Sausage Party” co-director Greg Tiernan.

“Sausage Party,” therefore, was an easy sell when Rogen pitched it: “When he got to the part where he said we want to do a movie about a bunch of sausages trying to escape their packaging to go fuck buns, I was totally sold right then and there.”

Trouble was it took eight years to make “Sausage Party” after being rejected by every live-action and animation studio. That is, until indie producer Megan Ellison (“Her”) offered to co-produce with her Annapurna Pictures company. They took it to Sony and the budget (after rebates) was a modest $19 million.

Vernon approached Tiernan to co-direct and produce it at his small Nitrogen Studios in Vancouver, where 150 artists achieved quality animation. First, they did a proof-of-concept test to visualize all of these sausages hoping to get bought by humans so they can have sex, which, of course, turns out to be fatal mistake.

The design went from hyper-real to cartoony to keep it funny, not disturbing. “We pulled back a little bit by giving our characters rubber hose arms with big Mickey Mouse gloves and giant, floppy feet,” said Vernon. “We went back into the old Warner Bros. Bob Clampett, Goofy and Popeye cartoons.”

But it was a drawn-out search for tone with continuous conversations between the directors, Rogen, Goldberg and the writers. “We were constantly questioning ourselves,” Tiernan said. “Fortunately, our only confines as far as creativity was concerned was our own taste levels.”

When they ran it by the MPAA, though, that they only had to trim a few frames off some of the hardcore moments (including male pubic hair, chocolate sauce, relish and ranch dressing). “I have a sneaking suspicion that we made those guys laugh because they weren’t as hard on us as they could’ve been,” Vernon said. “We definitely made it a helluva lot dirtier than we had to so that when we cut something we knew what wasn’t going to go.” But when the filmmakers got grossed out by gore— when food strikes back at human shoppers— they toned it down as well. “We had blood running out of people’s eyes,” Vernon recalled. They also cut a guy having his Achilles tendon ripped out by potato peelers.

Not surprisingly, the recording process was very free-flowing and collaborative like live-action, with the directors, producers and writers in the booth with the actor and Rogen playing the other parts.

“New running gags and story points came about,” Tiernan said. “One of the improvs that Nick Kroll did [as Douche] was he had a pun thing where he’d have an idea and then a light bulb pops up and says, ‘Who, me?’ And he says, ‘Not you!’ And Selma Hayek took over in the booth and surprised everyone when she said, ‘Go fuck yourself, El Duce!'”

There’s a lot riding on “Sausage Party” as the first R-rated CG-animated comedy. “Hopefully, it works in a funny, comedic way in CG and we can make a lot more of these in the future,” Tiernan said.

They already have some rough ideas for new adventures in survival now that the sausages and their friends realize the reality of their situation.