The third season of Mike Judge's tech-sector satire reveals its soft heart—good and weird in all the right places. 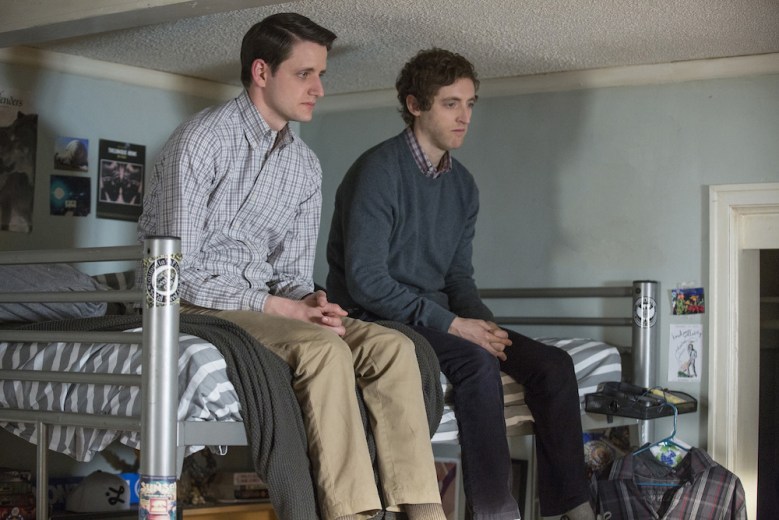 Richard Hendricks (Emmy nominee Thomas Middleditch), the sheepish, high-strung CEO of Pied Piper, prefers to take his bad news lying down. Confronting a choice between termination and demotion in the season premiere of “Silicon Valley,” he sprawls on the floor, face pressed to the carpet; later, after attempting to grow his compression platform’s number of “daily active users,” he admits defeat by curling up in a bathtub the color of Pepto-Bismol.

On both occasions, he’s comforted by loyal CFO and kindred spirit Donald “Jared” Dunn (the note-perfect Zach Woods), a man of strong ethics and strange social graces, and it’s their relationship that reveals the satire’s soft heart. “Silicon Valley” features mercilessly funny criticism of tech-sector excess, but its sense of humor is built on the belief that the good guys can win. The series accepts Richard’s lament in the season finale—”Every time I try to do the right thing, I get fucked”—only to reject his resignation: Like Jared, it’s constantly pulling him back to his feet.

In this, “Silicon Valley,” created by Mike Judge, John Altschuler, and Dave Krinsky, draws a sharp contrast with its HBO competitor, “Veep.” Where Armando Iannucci’s bleak view of modern politics bleeds into his craven, foul-mouthed characters, clawing at and climbing over one another in pursuit of power—no ethicists need apply—”Silicon Valley” creates space for Richard and his colleagues to weigh wealth and fame against friendship and virtue; the temptation to compromise with cutthroat venture capitalists and rapacious corporations is omnipresent, but even the larger-than-life ego of Erlich Bachman (T.J. Miller) deflates when Richard’s neck is on the line. For every wrench the series tosses in the works, threatening Pied Piper with failure, there’s a show of spine from the core ensemble, a boardroom vote or financial sacrifice that staves off the bubble’s pop.

With its recent third season, “Silicon Valley” largely scuttles the lazy patois of gay panic and adolescent put-downs to focus on the effort to bring Pied Piper’s platform to market, reserving its scorn for self-styled visionaries and mercenary middlemen. There’s infighting and backbiting, of course, particularly on the part of Richard’s more calculating partners, Dinesh (Kumail Nanjiani) and Gilfoyle (Martin Starr), but their shared pride in the craft of coding forges the sort of allegiance that no offer of riches can dissolve. (“Our platform does exactly what we say it does,” as Richard notes. “It’s not like we’re lying about it, like fuckin’ Theranos.”) From Jared’s memorable recitation of “O Captain! My Captain!” to Richard’s flailing effort to explain Pied Piper to a focus group, the fun had at the ensemble’s expense is gentler now, even generous—a comedy of errors in which we root for the characters to succeed because of their foibles, not in spite of them.

Thanks to the series’ comic villain, Gavin Belson (Matt Ross)—not to mention fellow Silicon Valley eccentrics Jack Barker (Stephen Tobolowsky) and Laurie Bream (Suzanne Cryer)—”Silicon Valley” need not blunt its barbed approach to the industry itself, however. In fact, with Pied Piper forced to fend off challenge after nefarious challenge from Belson’s Google-esque behemoth, Hooli, the emptiness of the tech world’s New Age commonplaces and messianic ambitions comes through as clearly as ever. Whether using endangered species to win arguments with his board or endorsing Barker’s plan to turn Pied Piper’s game-changing innovation into a bland cog in the digital machine, Belson is a parody of Silicon Valley sages from Steve Jobs to Sergey Brin, but only barely—as MTV News’ Inkoo Kang joked on Twitter, an economic sector in which Peter Thiel is a prominent figure is absurd enough on its own.

Still, when “Silicon Valley” lands a punch, it has the force of a facepalm: The single most hilarious bit of the season might be the ad campaign that accompanies Pied Piper’s debut, a confection of corporate bullshit that rivals Enron’s “Ask Why” spots for sheer nonsense. “Tables. Tables are made so a person can sit down and do something. Or nothing,” the narrator explains. “And that is why tables are like Pied Piper. Grapefruits, postcards, hugs—these are things people share to connect and come closer.”

Though it inhabits a space in which “connection” is often no more than a buzzword, then, the strength of “Silicon Valley” is its compassion for its characters, and for the foundational notions that Internet giants tend to forget soon after their IPO: “Don’t be evil,” “Think different,” “Discover what’s new in your world.” This may not be enough to carry it past “Veep” in Outstanding Comedy Series, but its two nominations each for Outstanding Writing—Dan O’Keefe, “Founder Friendly”; Alec Berg, “The Uptick”—and Outstanding Directing—Judge, “Founder Friendly”; Berg, “Daily Active Users”—suggest that the quieter comic insights of “Silicon Valley” have at least a modicum of Emmy appeal.