In two of TV's best animated series—one short form, one sitcom-length—it's affection, not alienation, that wins out. 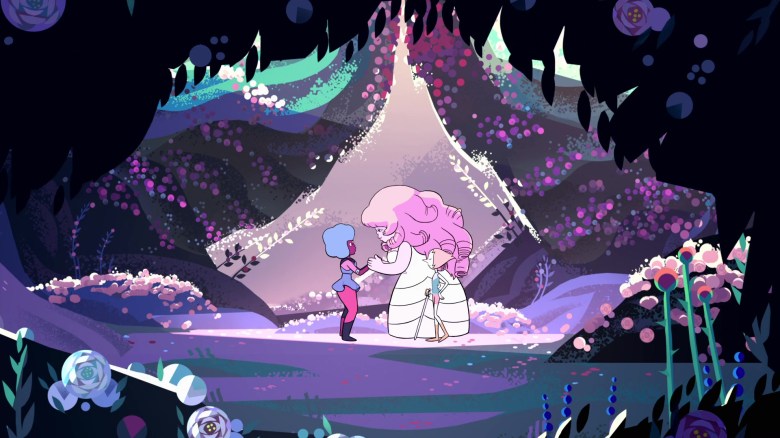 From opening theme to closing credits, “The Answer” is eleven minutes—but as with most episodes of “Steven Universe,” its emotional reach seems infinite. Even the title card is immaculate, clothes on the line and leaves in the trees rustling under a midnight moon. In the Emmy-nominated Short Form Animated Series, the most ravishing approach to the art form currently on television, each frame, ant-like, carries many times its own weight, and together the images foster a kind of communal spirit. Down to the frogs and fireflies in an untouched forest, or the fusion of two characters into one, in “The Answer” “Steven Universe” reaffirms its faith in the additive power of cooperation, a children’s series with potent insights for adults.

Created by “Adventure Time” veteran Rebecca Sugar, “Steven Universe” (Cartoon Network), which began its fourth season earlier this month, features a complex feminist mythos: The fantastical Crystal Gems, Amethyst, Garnet, and Pearl, fight nefarious forces using superpowers gleaned from their precious stones, and shepherd Steven—born to a Crystal Gem mother and a human father—through the process of understanding, and wielding, his own. Don’t let this scare you off, though. The world building in “Steven Universe” is done with a deft touch, such that the series never bogs down in the details of origin stories and interstellar rebels; from moment to moment its thrust is affective, not narrative, and it’s in the animation that “Steven Universe” suggests its interest in the characters’ multilayered identities, alone and as a group.

In “The Answer,” the series’ brilliant Emmy submission, this assumes the shape of an extended flashback, as Garnet wakes Steven to mark his birthday and explains how she came to be. Inspired by pioneering German animator Lotte Reiniger, the episode focuses on a long-ago conflict, but its tale of transformation is immediate, told in changes of line and color. At first, foreboding silhouettes move past Sapphire, a prophetic Gem, and Ruby, the solider assigned to protect her, the pair sketched in shades of electric blue and fire-engine red. Soon, though, the sequence erupts into action: A diaphanous cupola sprouts legs and scuttles away like a spider; slashes of light and puffs of smoke cast the climactic battle as if contained in an old-fashioned comic book, mimicking the genre’s “Pop!” and “Whizbang!” The point is, “Steven Universe” requires no narration to create momentum, or even to elucidate the particulars of its plot—the series’ celebration of difference, and of the strength diverse voices acquire when united in common purpose, is right before our eyes.

The episode’s denouement, as Sapphire and Ruby are cast down to Earth for daring to be different, crystallizes this invigorating commitment to collaboration. Within the adventurous space of “The Answer,” “Steven Universe” asserts the importance of being true to oneself, and of finding fellowship among those who accept that self without question. It’s yet another of the series’ sublime innovations, one of which Sapphire and Ruby sing before their fusion into Garnet: “Where did we go? What did we do? I think we made something entirely new.” If “Bob’s Burgers” (FOX) is not quite as novel as “Steven Universe”—it bears the influence of live-action sitcoms and “The Simpsons” alike—it nonetheless resists both the nastier inflections of Seth MacFarlane’s animated empire (“Family Guy,” “American Dad”) and the darker complexion of Netflix’s sterling “BoJack Horseman,” preferring to see the more minor dysfunctions of familial relationships as an integral part of their warmth. “Maybe it’s good to be annoyed by your family,” as Bob says in the Emmy-nominated Animated Program’s sixth season, “because that means you have one.”

It’s this delicate two-step of exasperation and affection that grounds the zanier aspects of “Bob’s Burgers”—Spanish ballads with simultaneous translations, impromptu ice capades to win a spot on Santa’s “nice” list—in the recognizable rhythms of family life. For all its verbal pyrotechnics, including the ever-changing, pun-loving names of neighboring stores, pest control companies, and daily specials, creator Loren Bouchard’s hilarious glimpse inside the Belchers’ burger joint is straightforward, and unabashedly sincere, when it comes to the subject of love: The characters, drawn with wide, sensitive eyes and buoyed by the finest voice work this side of “Rick and Morty,” might sigh, or spar, over each other’s eccentricities, but in the end there’s no doubt that they’re in it together.

Most series of its ilk adhere to a similar structure, of course, but even after 107 episodes, “Bob’s Burgers” is neither formulaic (“Modern Family”) nor cynical (“Fuller House”) in its approach to kinship. The Belchers’ familiar tics—eldest Tina’s romantic streak, pint-sized Louise’s conspiratorial one—are arranged into shifting alliances and surprising correspondences; for example, Louise’s prank in the season finale, of which Bob is the inadvertent victim, becomes the excuse for a first-rate father/daughter duet. (The apple doesn’t fall far from the tree.) Anchored by John Roberts’ doting, inimitable Linda, my favorite sitcom mom of recent vintage, the Belchers come to resemble most families: Together, their disparate personalities are harmonic, five different instruments humming along in the same key.

If “Steven Universe” reveals the humane through the magical, then, “Bob’s Burgers” finds the genuine in the goofy. As a magazine feature on Bob’s Burgers notes in the season finale, replete with a photograph of Bob glued to a toilet seat, “We did did have a rather unique and strangely inspiring experience while we were there. This shabby little dive seems to hold a special spot in the dingy town’s heart.” I couldn’t have said it better myself.