The latest entry into the expanding DCEU doesn't bode well for the future of the franchise. 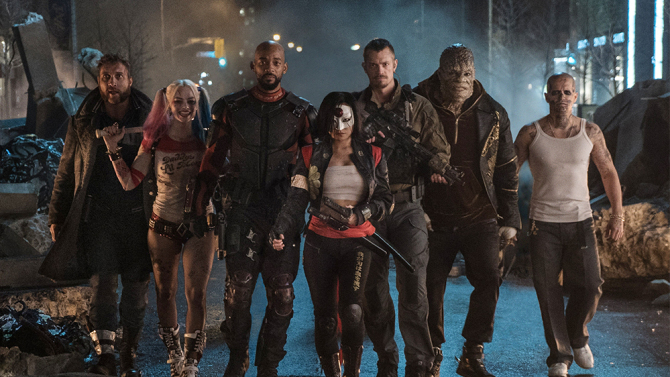 ERIC: We don’t have to waste too much time making the case for the failings of “Suicide Squad,” which David lays out pretty clearly in his review. It’s a messy, joyless movie that mistakes one-note edginess for fun. It might be instructive to explore if there was any appeal to this material in the first place. Who thought the idea of a superhero story starring bad guys — and you could play a drinking game with this movie based around every time someone says “bad guys” — would work?

Actually, many people. Lest we forget, the Suicide Squad dates back to several decades in comic book history, and the modern version launched in the late eighties — the same era as dark superhero riffs like Alan Moore’s “Watchmen” and Frank Miller’s “The Dark Knight Returns” defined the industry standard. DC movies get a lot of flack for suffocating their stories in grim atmospheres, but some 30 years ago, that same dreary quality was realized by the sharp literary instincts of writers in touch with the nature of the material. There is a certain absurdity to the idea of a costumed character fighting crime, and these comics used that perspective to bring their eccentric characters to life. Good or bad, they were all a little bit crazy — and driven that way, at least in part, by the broken justice system surrounding them.

Hence “Suicide Squad,” a bunch of prisoners essentially on a work-release program, at the mercy of a divided system unsure what to do with them. That’s the essence of the movie, too, and at a time when the unseemly state of the American prison system is part of the national conversation, such commentary positioned in the context of a subversive blockbuster would be welcome. So…why is this movie so shallow when the metaphorical possibilities cut so deep?

KATE: The first problem is that the film itself is woefully disinterested in digging deeper into anything, least of all the bigger and more timely questions raised by very bones of its narrative. Here’s a film that uses a dream-like fantasy sequence (delivered care of a 6,000-year-old witch, because why not) to literally show us some of the characters’ most fervent wishes, and only comes out with cutting insights like “he’d love to kill Batman!” and “what she really wants is a suburban ranch-style house!” or “a beer would be nice!” Ayer’s film has big ideas and even bigger characters at its disposal, but wastes them in hopes of delivering a “fun” shoot-em-up about how good it is to be bad (and, yes, a film about baddies unleashed in hopes of doing something of substance is an appealing idea, even outside the world of comic book movies). The main issue seems to be that “Suicide Squad” is hamstrung by its placement in the DC movie universe — one that’s attempting to get away from the grim darkness of “Batman v Superman” and move into a lighter world that “Justice League” is hellbent on selling to us — and as a result is neither fluffy enough to be fun nor dark enough to tap into Ayer’s typical sensibilities. You can see flashes of this working, which makes it all the more frustrating that, as a whole, it just doesn’t. Margot Robbie and Will Smith as Harley Quinn and Deadshot are the best thing in the film, and when the two of them start gelling as a partnership (and the rest of the team starts falling in line), you can see how and where and why a movie about these characters should work. But this one doesn’t.

Thorny moral issues? When a film can’t even strike a correct tone or tap into the basic humanity of its characters, things like that are the first to go.

DAVID: I’m not sure if I agree with the notion that “Suicide Squad” is hamstrung by its place in the DC movie universe, at least in regards to the film’s substance. Like any of the Marvel movies, I suppose it’s limited by its responsibility to keep certain characters alive, or introduce others so that they can serve a greater purpose in a future installment, but — like “Guardians of the Galaxy” — the driving impetus behind the movie is to have fun with the connective tissue between the flagship titles. In other words, the movie should be empowered by its place in the DCU (at least in theory; practice is a different story).

But I guess what I’m trying to say is that “Suicide Squad” isn’t a victim of its property so much as it is a victim of its scale. “Guardians of the Galaxy” was successful because it somehow convinced a post-Potter world that it was such a weird idea to drop a humanoid tree and a talking raccoon into the middle of a well-oiled blockbuster machine, it allowed audiences to own the narrative of helping to mint an “unlikely” hint. At heart, however, it was just another Marvel movie about a roguish cast of characters who have their hearts in the right place. Because of that, it was allowed to be this huge blockbuster. “Suicide Squad,” on the contrary, is ostensibly about bad people. Redeemable ones, sure, but — quoth Viola Davis — “the worst of the worst.” But when you’re making a movie that needs to gross $800 million to break even, you can’t afford the worst of the worst. You can’t even afford the worst of the bad. You need characters that people love and can root for, you need anti-heroes who killed slimy drug dealers in order to support their young daughters, not anti-heroes who… I don’t know… burned down an orphanage, or something. The movie is too expensive to actually be subversive, and it will have a huge opening (and then plummet) because it’s effectively been sold on the veneer of being subversive. Just saying, if you have to have the word “dangerous” tattooed on your forehead, how dangerous can you really be? As Kate said, thorny moral issues are the first to go. But this story can’t survive without them.

ANNE: At Comic-Con 2015, the original Warner/DC “Suicide Squad” materials looked refreshing and fun. And so did Fox/Marvel’s  “Deadpool.” Why did one turn out so well and the other so badly? (“Suicide Squad” will break August records this weekend.) For one thing, Fox was able to take some risks with an R-rated, $58 million “Deadpool,” freed from the strictures of Disney Marvel. It worked — to the tune of $783.7 million worldwide, on a budget of $58 million. It’s disturbing how flat-footed Warner Bros. and DC continue to be in their imitation of what Marvel —under the direction of uber-producer Kevin Feige—does so well. Wedging “Suicide Squad” into Batman’s Gotham universe doesn’t work at all; it feels wrong every time Ben Affleck turns up, like, “what is he doing here?”

Warners has long chosen directors to execute their DC series, which have fitfully risen and fallen on the strength of a Dick Donner, Tim Burton or Christopher Nolan. Clearly, Batman/Superman/Justice League visionary Zack Snyder is no Feige, and neither is DC’s recently promoted Geoff Johns. (DC and Warners have been wrestling for control for decades.) And I’d like to see the more fleshed out R-rated version of what David Ayer, a gifted writer-director, came up with here. You can feel the movie-by-committee decisions, dominated by pandering to audiences within the strictures of a PG-13 rating, and fueled by the fear of having to deliver a franchise launch on a reported $175 to 250 million budget. Something went wrong in the editing room, as the character beats are missing — these things don’t work unless the characters are fleshed out and you root for them. There’s muscle tissue gone, so the thing doesn’t hang together. Jared Leto has said much was left on the editing room floor — and the relationship between The Joker and Harley Quinn makes no sense at all. Margot Robbie as pig-tailed killer minx Quinn  is the best thing in the movie, along with Will Smith as Deadshot, and Joel Kinnaman and Viola Davis rise above their roles, but as per studio convention these days the movie devolves into hideous chaos signifying nothing. This speaks to a studio without its own vision of what makes a good movie. And that’s a consistent issue over the past few years.