The film is currently in theaters and available on VOD. 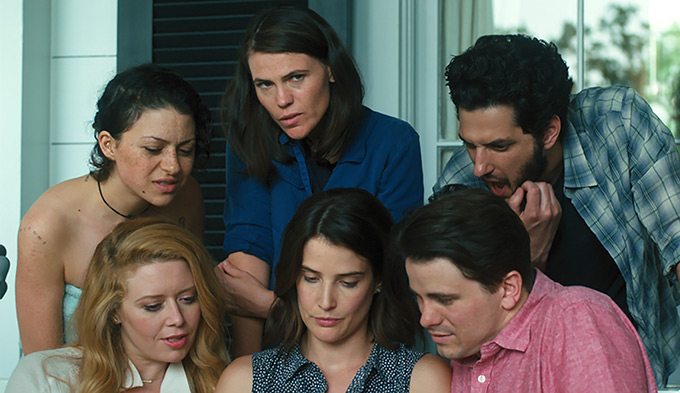 Everyone knows a couple whose behavior prompts the question, “How are they still together?” Clea DuVall’s debut feature film “The Intervention” takes that question to the next level by actually staging a couple intervention. The film follows Annie (Melanie Lynskey) and her fiancé Matt (Jason Ritter) who plan a getaway weekend as an excuse to confront Ruby (Cobie Smulders) and Peter (Vincent Piazza) about their toxic relationship. They invite along two other couples — Jessie (DuVall) and Sarah (Natasha Lyonne) and Jack (Ben Schwartz) and his 22-year-old girlfriend Lola (Alia Shawkat) — in order to ease the tension, but everyone’s presence inevitably ratchets up the awkwardness. Soon, problems arise, secrets are revealed, and relationships are tested as they all start to examine their own lives and connections with others. Watch an exclusive clip from the film below.

Clea DuVall is best known as an actress who has appeared in numerous films and TV shows. She’s probably best known for her starring role as Sofie on the HBO series “Carnivàle,” as well as recurring roles on “Heroes,” “American Horror Story: Asylum,” and most recently, “Veep.” She has also appeared in movies such as “Argo,” “Zodiac,” “Girl, Interrupted,” and “21 Grams.”

Meanwhile, Melanie Lynskey is best known for her roles in “Heavenly Creatures,” “Up in the Air,” “Happy Christmas,” and “The Perks of Being a Wallflower.” She recently starred in the HBO half-hour series “Togetherness,” along with Mark Duplass, Steve Zissis, and Amanda Peet.

“The Intervention” is currently in theaters and available on VOD.

This Article is related to: Film and tagged Clea DuVall, Cobie Smulders, Melanie Lynskey, The Intervention