The film featured an all-female production crew. It will premiere in the Special Presentations section of the Toronto International Film Festival. 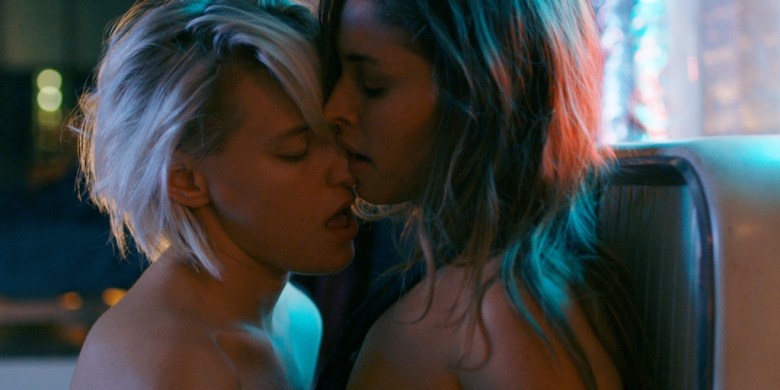 An unexpected romance can feel like a bolt of lightning, a powerful experience that must be felt to be truly understood. April Mullen’s latest film “Below Her Mouth” captures that feeling in its story of two women who suddenly and passionately fall in love.

Successful fashion editor Jasmine (Natalie Krill) lives with her fiancé, Rile (Sebastian Pigott), but one night out in the city, she meets Dallas (Erika Linder, in her film debut), a roofer recently out of a relationship. Jasmine is surprised when Dallas confidently hits on her. Though she turns her down, Jasmine can’t get Dallas out of her head, and in a manner of days, the two women embark on a steamy affair. Their relationship feels like a fantasy away from Jasmine’s plans with Rile, but reality soon rears its ugly head, and Jasmine is forced confront the profound changes their romance has brought into her life.

Watch an exclusive trailer for the film below and check out the film’s poster as well.

The film is notable for featuring not just a female writer, director and producer, but also an entirely female production crew.

“We wanted to honestly express a women’s view of intimacy, honesty, lust, sex, love and what turns us on…what takes us to the point of no return no matter the gender,” says Mullen. “To keep as true as possible we included all key creatives, from sound, to design, to editing, to costume, to lighting, and music. On the floor, an all female crew would allow the actresses to feel supported, and allow themselves to forget everyone in the room and escape into each other.”

READ MORE: TIFF Adds New Round of Titles, Including ‘It’s Only the End of the World,’ ‘Mean Dreams’ and More

“Below Her Mouth” will premiere at this year’s Toronto International Film Festival in the Special Presentations section. Cinetic will be handling U.S. sales and Elle Driver will be selling international. This Article is related to: Film and tagged Below Her Mouth, TIFF 2016, Toronto Film Festival