"When I hear people call [Trump] a Nazi, I do get offended." 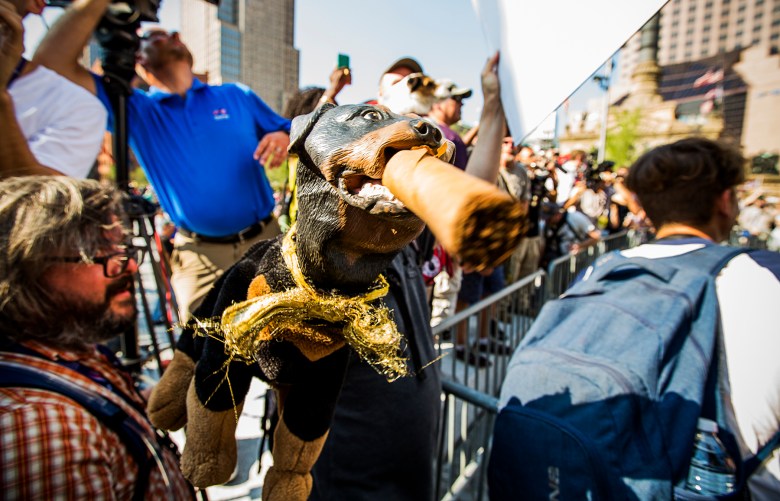 When IndieWire sat down with Robert Smigel, he was very tired, because the legendary comedian was in Los Angeles for just a few hours, promoting the newest installment in his most famous creation’s reign of terror.

“I’m very grateful that [Hulu] have kept trying so much,” he explained about why he was willing to make an appearance at the Television Critics Association summer press tour. And in fact, the streaming service has given Smigel a bigger platform for Triumph, all the way to a Best Writing Emmy nomination for the variety special “Triumph’s Election Special 2016.”

Triumph has made a name for himself as being one of the most brutal comics on the scene, but also one of the most unbiased — even if Smigel himself isn’t shy about his personal politics. Below, the former “Saturday Night Live” and “Late Night With Conan O’Brien” writer reveals what it was like to dig into the festivals, why he regrets at least one Donald Trump joke he’s made and why he thinks some people will look him in the eye instead of Triumph.

How fast did this come together?

First one was literally like a miracle because I’d done Triumph for years, but doing three or four remotes a year. That’s the the way I like to work. I love to just hover over every detail and nail it and, you know, writing with the other guys and then getting the shots right and then sitting over the editing and treating each one… As crude as they are, you treat them like they’re little oil paintings.

In January, I pitched this idea, and basically, I started talking about it with writers in December and finished in like six weeks. Like I said, I’m used to shooting three or four of these a year. I shot about 15 in two weeks when I was in Iowa, New Hampshire and South Carolina.

This time, it was even harder. Less travel, but more stress, because there’s so much going on, and you just want to capitalize on this very tiny, limited window. It’s crazy. Completely nuts. Been living in an office ever since I got back. Literally sleeping in the office editing. There’s so much material. I don’t know if it’s good, but time will tell. Hope so. The people have been laughing at the screenings, so… I’ve been following Triumph for years, but it feels like this is the first time I’ve ever really gotten to see Triumph almost have a network home somewhere.

Yeah, you know, I mean I have a great relationship with Conan. He’s one of my oldest friends, but this was the first time we’ve really expanded on Triumph. I did do a comedy album, I guess, oh my God, 13 years ago that was actually nominated for a Grammy. It was very, very crude. Incredibly crude. I learned very quickly, as funny as it is when Triumph is dirty, you can’t lead with that. So ever since then, I’ve focused on just being smart and obnoxious at the same time.

I pitched this around to Netflix and Hulu and other places — it wasn’t necessarily going to be a political special. I just wanted to do a special. But then Donald Trump came into the forefront, and people were actually calling him Trump the Insult Comic Dog in the Wall Street Journal. It made me think, okay, well maybe that’s the perfect thing to do. Just jump in.

I’ve always loved the idea of covering the early part of the primary season, because the access you get to the candidates is so incredible, because they’re just bothering everybody in the States. They’re there for months in those early primaries.

Oh yeah, the meet-and-greets at the coffee shops and all that stuff. I mean, such a funny world to parody. [The conventions], I was much more reluctant to jump in because this is something everybody focuses on. Every political comedian.

I made a joke at one point during the RNC that there were more comedians there than actual Republicans.

I know. It’s true. It was like a freak show, but that’s the way this whole campaign has been treated, you know? Comedians are just descending upon us. The media is almost treating him like fodder for material as opposed to a real candidate. He has so much baggage with everyone.

Yeah, I mean, I’ve begun to feel really strongly about this. The question of, you know, when we make fun of Trump, does that humanize him? Does that make him feel more relatable?

Well, I think there’s such a disconnect between the people who support Trump and the people they perceive as having disdain for him that only strengthens them. Sometimes I think the media goes overboard in attacking him in ways that feed into his whole rap about the media being rigged and not having credibility. I mean, that New York Times article came out…

The one about women?

Yes. I immediately thought this is going to backfire. It hinged on just a few people, and on the front page, and it just had smelled of a smear attack. They don’t really need to do that because he manages to say stuff every other day. We parody that in the show.

One of the best jokes from the first special was one that really like hit me hard was … I’m not going to try to recreate the phrasing of it, but it was about we’re making history like Germany, 1931.

Yeah, I actually felt a little guilty about doing that. Because it was a well-written version of a “Trump is a Nazi” joke.

It was a very classy version of that joke.

Exactly. When I hear people call him a Nazi, I do get offended. You know, partly because of the Holocaust, and people just recklessly associating something like that with just a guy who’s kind of obnoxious and divisive. I also got offended, just on a hackle, just because I just think back to all the years George Bush was called a Nazi, and, like, Hilary. I tweeted something with pictures of Obama with the Hitler mustache. A poster of Hillary that was Hitler-y. It goes so far back, and it just depresses me because it’s become like this reflexive move. It trivialized reality, you know? There’s Godwin’s Law on the Internet — where the first person to bring up Hitler in an argument loses.

I want to ask you about a little production thing I’ve noticed, which is whenever you’re filming with Triumph in the wild…

In the wild? [laughs]

I think most people, their first instinct is to look at me, but I think it’s the same kind of … I think extroverts, just their natural instinct a lot of the time would be to look at the puppet, like they’re just immediately in the game. Then there are other people, where it’s so unnatural to them that they’re just going to look at me.

So the people who are more game look at Triumph?

The other day, I did it at the DNC and Sarah Silverman kept looking at me. Maybe that’s just because we’re friends or something. It was funny to see a performer fall into that.

After attending both conventions, what was your take-away?

I was having fun the whole time, both weeks. There’s plenty to make fun of on both sides this year. But then there was that moment in Obama’s speech where he was defending Hilary and he quoted Teddy Roosevelt, and it was this line about mistakes are always going to be made by people who try, by people who throw themselves into the arena. That’s the phrase he used that just lit up the crowd because they’re the people in the arena striving to make a difference. It was a good reminder that most of the people on both fronts, a lot of them really want to make a difference.

That’s beautiful. Is that part of the…

Oh, God, no. I’m gonna chew up his ass. But when people ask me about my politics, I’m not embarrassed to say that I lean toward the left, because I’m sort of proud that I keep trying to stay in the center, making fun of both sides.

Yet these days, looking at the late night scene — you’ve got Seth Meyers very clearly making his stance known, but “The Tonight Show’s” still kind of clinging to the idea that they can make fun of both sides equally. Can they really?

Well, I find that, even Triumph, among all the comics who strive to hit both sides equally, and this goes back to like the ’90s and the Clinton administration… People used to make the point like, well, when comedians make fun of Bill Clinton, it’s always about sex and “I feel your pain” and all that kind of stuff. It’s never about his policies, but they call themselves even-handed.

We make fun of Clinton, but at the same time, and I find this, too, sometimes, that I have a little trouble. It’s so easy for me to make fun of far-right policies that, to me, sometimes they seem like they’re passing. Their time is passing them by, and it’s an easy target, and it’s not as easy to go the other way. You don’t see a lot of comedy about entitlements.

Like I said, to me it’s very important. I don’t mind saying, alluding at least, to where I stand on certain things — but I have no business imposing that on this puppet.

“The Triumph Summer Election Special” is available now on Hulu. Check out the trailer below.