As two holdovers vie for number one during the dog days of August, Paramount's likely money-loser "Ben-Hur" will do far better overseas than stateside. 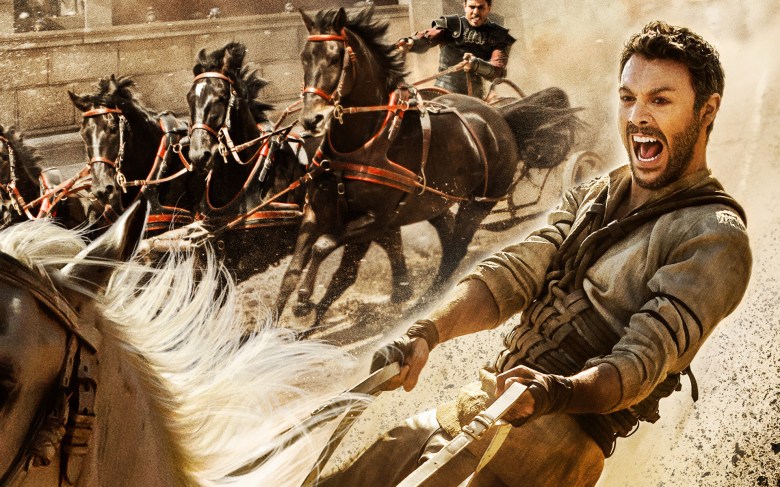 The late August weekends prior to Labor Day can offer opportunities for box office breakthroughs because the studios historically save these dog days for their weakest entries. Three years ago, Weinstein took “The Butler” to $116 million domestic after a robust $24.6 million opening. None of this weekend’s three new wide releases will reach that level.

“Ben-Hur” (Paramount), “Kubo and the Two Strings” (Focus) and “War Dogs” (Warner Bros.), as well as three holdovers, should all score more than $10-million for the weekend. That would set a record for the last half of August, and so would any Top Ten total above $114 million (unadjusted at least). This weekend in 2015 scored only $85 million. Two pictures are contesting for different contests weekend bests. One will end up at #1, in a close race between the third weekend of Warner Bros.’/ D.C. Comics’ fast-falling “Suicide Squad” and Sony’s sleeper animated success “Sausage Party.”

After edging “Sausage” by around $9 million last weekend ($43 to $34 million), sliding “Suicide” has narrowed its margin over the R-rated animated comedy. “Sausage” might provide real competition somewhere in the low $20 millions to take the top spot in its second weekend. If not, “Suicide” wins its third. Only three Disney films have accomplished this feat since “Zootopia.”

The third spot could go to “Pete’s Dragon” (Disney) on its second weekend, which needs a strong hold to make a path to profit. It could see a gross around $13-14 million.

“Ben-Hur” (Paramount) has the most to prove. Timur Bekmanbetov’s third version of the Biblical-times novel cost around $100 million. The first two big screen takes on the material are among the biggest hits of all time. This one might not even be the top opener of its week.

What makes its gross tougher to gauge is that this is aimed squarely at faith-based audiences, who have boosted other such films above expectations. This of course also has an action/epic audience, but it comes after both “Exodus: Gods and Kings” and “Gods of Egypt” fell short. The latter could only manage a $14-million opening total last February despite featuring a lead (Gerald Butler) bigger than any name in “Ben-Hur.”

The reality: This film is targeted for international audiences, with higher hopes in Latin America, parts of Europe (particularly Russia). While its North American total is not unimportant, it’s also not the biggest player.

Focus’ latest film from niche animated studio Laika is well-reviewed “Kubo and the Two Strings.” Laika’s four previous efforts have grossed almost $240 million in U.S./Canada, led by “Coraline” in 2009. The three released by Focus have all been Oscar nominees. Whether the huge dose of animated family features this summer will keep this below the usual Laika $14-17 million range remains to be seen. Still, it could overperform and top “Ben-Hur.” The third opener, “War Dogs,” is the second comedy in recent weeks from people involved with the “Hangover” series. Director Todd Phillips, like the writers who went on to the current sleeper hit “Bad Moms,” strays from the guys gone wild formula. He does stick to a buddy plot, with Jonah Hill and Miles Teller as a pair of unlikely gun runners.

The $50-million budget is not cheap, but it falls at the lower end of summer releases, and the two stars often enhance their titles. (Teller’s last movie was Video on Demand release “Get a Job” and his next is anticipated awards contender “Bleed for This.”) The summer’s most recent buddy comedy, “Mike and Dave Need Wedding Dates,” with Zac Efron, which was a bit more formulaic but less star-driven, opened to over $16 million.

The combined Top Ten total should keep the pace of around 5% year to date improvement over 2015. Likely to join them in the Top Ten as it expands to just under 500 screens is CBS Films’ acquisition “Hell or High Water” (Lionsgate), following up its strong 32-theater opening last weekend. The contemporary Texas-set bank robbery Western looks set to become a significant crossover success.

Among this week’s new limited releases, A24’s Sundance comedy/drama “Morris from America” has good advance reviews to join with its leading initial theater placement to make it the likely top grosser. Also opening in both New York and Los Angeles are Natalie Portman’s Israeli film “A Tale of Love and Darkness” (Focus), Werner Herzog’s “Lo and Behold: Reveries of the Connected World” (Magnolia) and the Adolf Eichmann-centered “The People vs. Ernst Bauer” (Cohen).