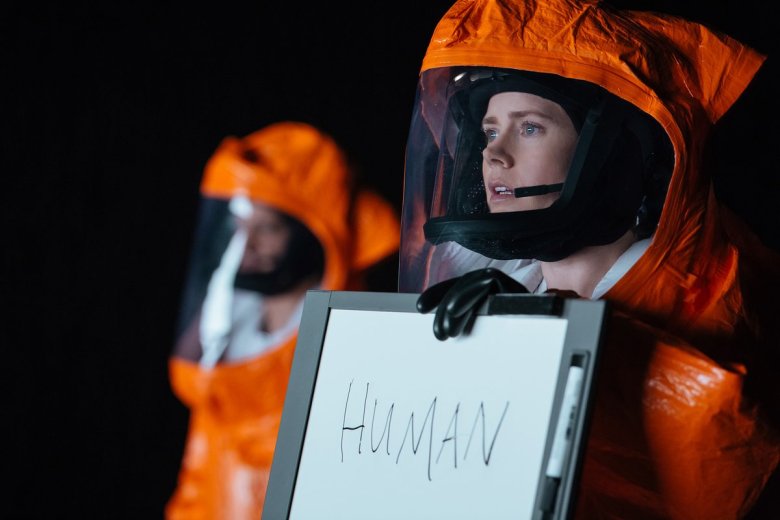 Denis Villeneuve’s career can be rather neatly cleaved in two. From the mid-nineties through the 2000s, he directed formally daring Quebecois films that collected awards and acclaim as they travelled the art-house circuit. In 2010, he went Hollywood, and since then he’s been making technically impeccable thrillers that always impress but never astound. To that bifurcated filmography arrives “Arrival,” a film that, well, rather neatly fits the English language pattern. Which is to say, “Arrival” has a hell of a lot going for it, but never quite gets there.

Amy Adams stars as Dr. Louise Banks, a professor of linguistics and mother of a daughter gone too soon. Villeneuve and screenwriter Eric Heisserer stress the centrality of both roles, opening with a striking sequence – think that elliptical Malick touch, spiking Villeneuve’s rigid tone – that follows, through Louise’s eyes, her daughter from birth through childhood to early death. The sequence is shot in tight close-up and lit in warm tones, a markedly different visual aesthetic than the chrome-buffed wide shots of the rest of the film, a reminder of life before a loss, and life after.

“Arrival” takes pains to establish Louise’s own pain, but she doesn’t wallow long. Soon, twelve space pods appear all at once above twelve seemingly random spots (here are the first movie aliens to ever choose Montana, of all places). They emit no energy, and offer no clue why they’ve come, but hell, their presence alone is enough to stir global panic, and our heroine is enlisted to communicate with them, to learn whether they’re friend or foe. Louise is partnered with mathematician Ian Donnelly (Jeremy Renner), an opposition explicitly set up to probe whether math or language offer the truest form of communication, but the film never goes further than asking the question and then never giving it another thought.

That being said, “Arrival” is no two-hander; it is Adams’ film through and through. The actress makes a very strong lead, embodying the kind of swashbuckling language pedant whose eyes light with adventure when offered a particularly challenging conjugation. Renner gives it his all as foil (or maybe something more), and Forest Whitaker and Michael Stuhlbarg effectively character-act along for the ride as security officials keeping their eyes on the academics, with their fingers constantly hovering over the button.

The film pulses with tense energy in early scenes. Louise’s first encounter with the aliens (called Heptapods, and resembling something between a deep water octopus and a spider from Mars) could almost be taught in film schools, such does it marshal every tool in the box. From Jóhann Jóhannsson’s iron death rattle score, to cinematographer Bradford Young’s pools of black, to Adams’ ferocious curiosity, every disparate element is perfect alone and better together, and all of them support the current of dread and intensity that has become Villeneuve’s signature touch. But eventually, the mood has to loosen, and with it, so too does the film.

Once the fog of mystery begins to clear and Louise begins to make sense of the Heptapods’ hieroglyphic-like language (and we’re no longer disquieted by their sight), the film begins to drag. Shots and sequences that once gave jolts lose their luster when repeated twice more, until “Arrival” shoots to life and introduces a new idea. The big idea, though you wouldn’t know it from the deviously offhand way Adams delivers her line, is that of the Sapir-Whorf hypothesis, a belief that learning a new language can essentially rewire the brain, and that perhaps learning an intergalactic language can have even more pronounced effects than say, learning Swedish. And it is very interesting idea, and one that the film, based on the short story “Story of Your Life” by Ted Chiang, truly does engage with. And then re-explain it. And then re-explain it. It is, in short, the only idea, and there it is, predigested.

Many will call the film “cerebral,” and that’s something of a false label. “Arrival” does indeed offer an alien invasion narrative that veers from further brawn and closer to brain, which is in itself a good thing. But there’s a world of difference between films about people thinking and a film that makes you think. For all that will be made about its self-importance and cerebral affect, the film doesn’t offer much more substance than your average “Twilight Zone” episode. For all that is made of language and theory, they mostly take a backseat for the film’s countdown-to-D-day third act. And once the Heptapods’ initial wow-factor wears off, their message would not necessarily feel out of place in a Stanley Kramer film.

“Arrival” has its heart in the right place. Who doesn’t want smart sci-fi? Who wants to argue with a big budget drama about linguistics? And though the film is not more than sum of its parts, well, those parts are pretty great. You just wish they belonged to a slightly deeper film.

“Arrival” premiered at the Venice Film Festival. It will arrive in theaters on November 11.