Sally Hawkins' charming lead performance can't save this true love story from feeling as naïve as its namesake. 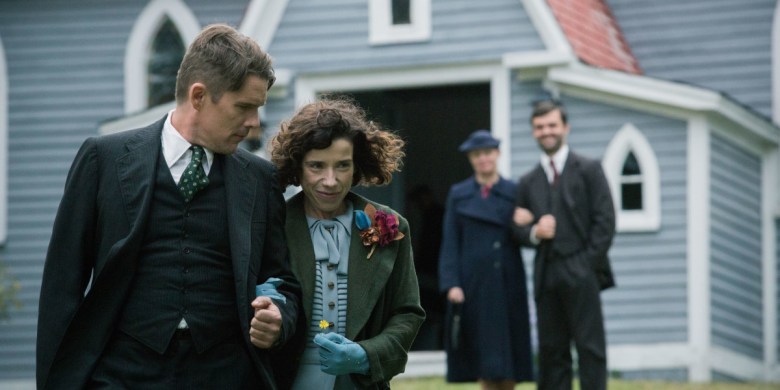 A tender but mawkishly simple melodrama about a handicapped painter who falls in love with a misogynistic orphan in Depression-era Nova Scotia, “Maudie” would be impossible to take seriously if not for the fact that it tells a true story. Of course, just because something actually happened doesn’t make it any easier to swallow the sight of it on screen. Despite charming performances from Sally Hawkins and Ethan Hawke, this saccharine romance — which pities its characters as much as they pity each other, and often veers perilously close to “The Other Sister” territory as a result — rings a bit false from start to finish.

Afflicted with a severe case of juvenile rheumatoid arthritis that finds her holding her right arm to her ribs like a bird with a broken wing, Maud Dowley (Sally Hawkins) tells people that she was “born funny,” emitting a little giggle after almost every sentence as if to prove the point. Her affliction doesn’t seem to get in the way of her painting, but it’s been murder for her potential — a small town in the 1930s was a tough place to be a woman, and even tougher for a woman whose own family regarded her as an invalid. So, when the local curmudgeon posts an ad looking for a live-in housekeeper, it’s easy to understand why Maud jumps at the chance to assert her agency.

What Maud doesn’t know is that her reluctant new employer, an orphaned fish peddler who lives in a musty shack so small it seems fit for a fairy tale, might be less of a curmudgeon than a sociopathic son of a bitch. Played by Ethan Hawke (whose growly, mealy-mouthed performance seems pitched somewhere between “Beauty and the Beast” and “Sling Blade”), Everett Lewis is a violent, misanthropic loner who only sees life for the pain it inflicts upon the people who’ve been forced into it.

When Maud parks herself in a corner of the house and begins to paint a childlike fresco of birds and animals on the rustic old walls, Everett hits her. Later, after they’ve gotten married and Maud has become semi-famous as one of the premiere figures of the Naïve Art movement, Everett relents. When Maud describes herself and her new husband as “an odd pair of socks,” it comes across as a characteristically adorable way of describing an abusive domestic situation.

Despite having all the makings of a Lars von Trier movie, “Maudie,” with its folksy score and beatific views of the raw Canadian countryside, soon thaws into an aggressively cute saga about how people only need each other in order to live a rich life. Working from Sherry White’s wildly uneven script, Walsh introduces major developments just as quickly as she brushes them aside — the film spends almost as much time on adorable shots of Everett pushing Maud around town in a wheelbarrow as it does subplots about its heroine’s shocking past.

But consistency is what this portrait does best. “Maudie” shares the modesty of its namesake, her aversion to sadness, and the satisfaction she took from simple pleasures — not once does it try to explain the interest in Maud’s childlike paintings, or justify their value. Walsh doesn’t even bother to provide context when President Nixon orders a few of them to hang in the White House, her film as uninterested in the news as Maud appears to be, herself.

Through it all, she just wants to keep staring out the small window of her house and painting what she sees on its walls. There’s something touching to the idea that her house is her canvas, her home life her masterpiece. But that notion is insufficiently explored in a film that strains for sweetness at the expense of truth — a film that feels as cut off from the reality of its characters’ existence as its characters were from the world beyond their window. Only during the film’s final moments does its nebulous sense of inauthenticity begin to assume a clear shape, as director Aisling Walsh can’t help but cap things off with a splash of archival footage.

Watching that short documentary clip of Maud and Everett sitting inside the frigid 12’ x 13’ hut they shared for more than 30 years, and seeing for yourself just how accurately the movie recreated their lives together, it feels as though “Maudie” is a counterfeit painting that’s determined to compare itself to the singular work of art it’s been trying to forge. The film wants to celebrate the simple life, but it doesn’t want to commit to what the simple life entails. It moves too fast to explore the tedium, to make us feel why these two rejects embraced each other, and that lack of support lets Hawke and Hawkins’ rich portrayals slowly unravel into a mess of affectations. Despite the clear sincerity of its efforts and the palpable sensitivity of its craftsmanship, the movie is so focused on what made its central relationship sweet that it almost completely overlooks what made that relationship matter.

“Maudie” premiered at the 2016 Telluride Film Festival. It is currently seeking U.S. distribution.