Werner Herzog's volcano documentary is a fiery reminder why we shouldn't take him for granted. 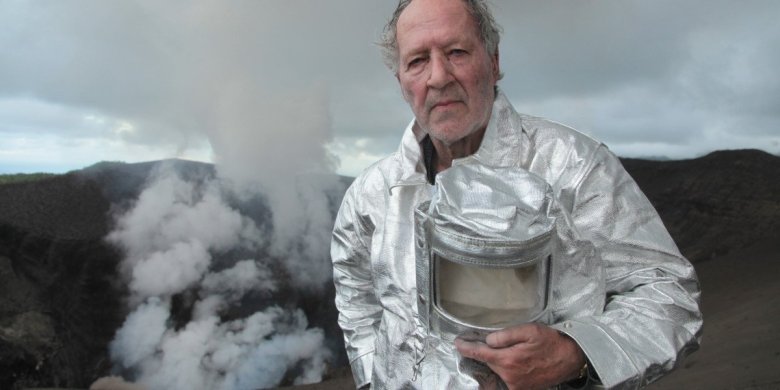 Werner Herzog directs “Into the Inferno.”

Werner Herzog, the singularly solemn-voiced German auteur who has been a major force in world cinema for almost 50 years, has forged his legend by laughing at death. A prophet of darkness and a showman who would bungee jump into hell so long as he could come back with the footage to prove it, Herzog has survived everything from the lifeless tundras of Antarctica to the impassably dark jungles of Peru; from the burning oil fields of post-war Kuwait to the raging anger of his best fiend, Klaus Kinski.

And yet, for all of the suicidal adventures that he’s survived with a droll smile, film’s ultimate daredevil seemed to have met his match when he was discovered by an upstart tribespeople known as “millennials.” Galvanized by the genius of “Grizzly Man” and tickled by Herzog’s affectless nihilism, a new audience of moviegoers glommed on to the filmmaker’s unique persona and submitted it for the internet’s selective appropriation. And Herzog, a serial self-mythologizer whose visionary genius is only matched by his flair for branding, couldn’t have been happier to embrace it — by the time he was commissioned to make a documentary about our digital future, he was already threatening to become more meme than man. But maybe, his awe-inspiring new film suggests, that was part of Herzog’s plan all along.

“Into the Inferno” is about volcanoes, but it really doesn’t matter. Every Werner Herzog documentary is ultimately about the same two self-contradictory things: The impermanence of human existence, and the myth of Werner Herzog. The hypnotic, hilarious, and deeply humbling “Into the Inferno,” a quasi-sequel of sorts to 2007’s “Encounters at the End of the World,” offers a staggering amount of insight into both subjects. Volcanoes are a natural point of interest for Herzog, and he shoots their molten plumes of hot lava with the same loving fondness that someone else might film their newborn child. He’s absolutely mesmerized by these lakes of primordial fire, by their power to erase entire continents like God’s own Etch-a-Sketch, and — most of all — by how the people who live in their shadows respond to such monolithic reminders of their pitiful place on this planet. Accompanied by charming Cambridge volcanologist and co-director Clive Oppenheimer (whom we see Herzog meet in some unforgettable b-roll from the shoot of “Encounters”), the teutonic legend travels a lap around the world, hopping from an island off the coast of Australia to Iceland, Ethiopia, and even the misty mountains of North Korea. And yes, the hermit kingdom is such a perfect canvas for Herzog that it’s tempting to think he made this movie just so he could contrive an invitation.

What do volcanoes dream about? Herzog’s voiceover narration (which is actually under-used, for a change) doesn’t say those exact words, but you can all but hear him thinking them. “Into the Inferno” stares into these liquid abysses with the director’s signature sense of morbid wonderment — he fetishizes their destructive power, but he’s more interested in the living than the dead.

Herzog’s ethnographic films often sidestep exploitation because of his gift for sniffing out the kookiest, most stimulating characters, and his latest feature is no exception. We meet an Aboriginal chieftain whose brother literally speaks to the volcano spirits (we’re told the spirits emit a burst of magma to light the man’s cigarette). We meet an Indonesian carpenter who’s working on the construction of a Roman-Catholic church that’s meant to be shaped like a dove but looks more like a chicken. We meet the world’s greatest fossil hunter, and also the severely warped Berkley professor who found him.

All the while, Herzog’s attention drifts where it wants, often lingering on people and places that have only a tenuous connection to the film’s supposed subject. Herzog shoots first, and asks how the footage might be pertinent to his project later; “Into the Inferno” often feels scattered and listless as a result, but this tactic is also responsible for so many of the movie’s most perfect moments.

In true Herzogian fashion, of course, the most interesting character of all is Herzog himself, even though he only briefly appears on camera. Known to tweak the facts if they better facilitate his search for “the ecstatic truth,” Herzog seems to play things as they lie this time around, but his worldview is inescapable, and his words have a way of coming out of other people’s mouths. Oppenheimer often seems like an unwitting accomplice (albeit a happy one), encouraging his interview subjects to narrativize nature in a way that repositions themselves as fleeting characters in their own stories, tears in the rain.

In both fiction and “non-fiction” alike, Herzog has always marveled at man’s inability to submit to his own limitations and irrelevance, reckoned with nature’s indifference to his plight. He has laughed at — but never mocked — the comically lopsided odds of life on Earth. He sympathized with Aguirre’s quixotic death march for El Dorado, he rejoiced when Fitzcarraldo brought opera to the jungle. And when, at the end of “Into the Inferno,” an islander grows so confounded by the local volcano that he starts a cult predicated on the idea that a mystical American G.I. will descend from the heavens with bubblegum and Cadillacs for the native people, Herzog hears him out. He’s drawn to people who can’t accept their own insignificance, because he’s one of them. One of us.

“Into the Inferno” premiered at the 2016 Telluride Film Festival. It will open on Netflix on October 28th.

This Article is related to: Film and tagged into the inferno, Reviews, Werner Herzog