Fox's TV adaptation of "The Exorcist" got off to an intriguing, if largely scare-free, start in a premiere that's already breaking from tradition. 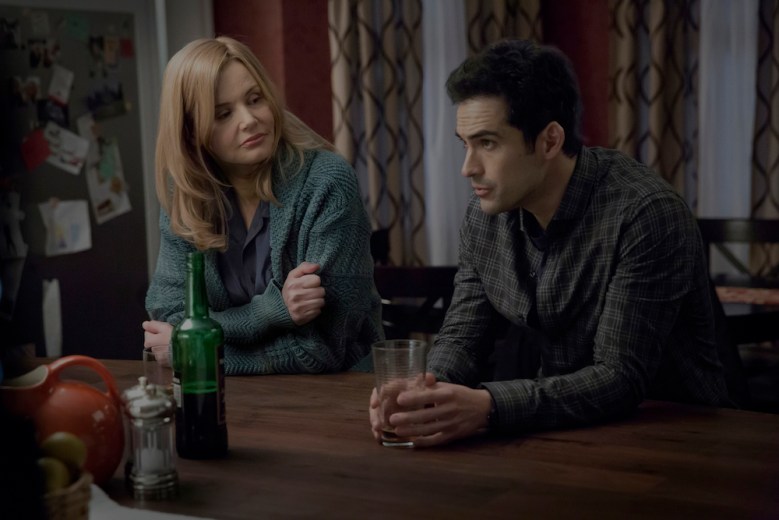 Adapting “The Exorcist” for television is a challenging prospect. Doing it for broadcast television, with its strict FCC rules on language and slightly softer guidelines on violence, seems damn near impossible.

With that in mind, creator Jeremy Slater’s Fox pilot seems to have done a lot right: stringing out the tension over the course of an hour, limiting the jump scares to a minimum and avoiding overloading the audience with gross-out gags akin to the green vomit made famous by the film. The premiere even works to establish characters before turning them into head-spinning demons — in fact, it even implies there won’t be any head-spinning at all.

Though the first hour dutifully pays homage to the scariest movie of all time — especially in its studiously lit opening moments — and even branches out with key changes meant to elongate the story, the pilot fails to pay off in one major way: It’s not very scary. While we’re more than fine with waiting (consider us the ‘scaredy cat critic), “The Exorcist” needed to do more in reassuring fans that frights were on the way. The ending functioned to set up a series, but it failed to produce any real terror or memorably unsettling imagery. Yes, the film also took quite a while to get to the frights, and that proved to be time well-spent once dressers started slamming into doors. This isn’t a film, though. Fox’s audience isn’t dutifully held to their seats, tickets purchased, popcorn in hand. Fans won’t wait around for weeks (or even one) if the most basic element of the novel and film’s revered stature isn’t present.

It felt like in lieu of frights, Slater (as well as director and executive producer Rupert Wyatt) served up two important, if not all that rewarding, twists: [Spoilers ahead for the pilot episode of “The Exorcist.”] First, we discovered if a possessed child turns his head behind his back, he’s not going to snap back around. He’s a goner. Father Marcus (Ben Daniels) found this out the hard way, as his lengthy exorcism got away from him in the end, and the devil took home another soul.

This is only really matters as a statement: “The Exorcist” on Fox will not abide by every precedent set forth in the film. Just because Linda Blair did it, doesn’t mean we should expect the same — or the same results, at least — when similar possessions occur in the series. And that leads us to twist No. 2: Though early indications pointed toward Catherine (Brianne Howey), the secluded, angry, darkness-loving daughter, being in the early stages of demonic possession, turns out Casey (Hannah Kasulka) has already been completely taken over by one of the devil’s minions. After spending the entire episode building up mysteries within the Rance family — What happened to Henry? What are those voices in the walls saying? When will Cat turn into a soup-spitting vulgarian? — it wasn’t until Father Tomas (Alfonso Herrera) took the bait to crawl into the attic that we discovered who was really to fear within the dark Chicago house. Not only was Catherine fitfully crawling across the floor, eating dead rats killed by unseen forces, but she seems to be fully aware of her hidden identity — as noted by her creepy smile from the window as Tomas left. She’s not just possessed. She can also hide her possession, making her infinitely more dangerous.

Worse yet for our demon-battling priests, Catherine spit out the ominous rat metaphor, “Don’t they say where there’s one, there’s probably a whole bunch?” So, are we going to see a whole lot more possessed kids pop up in Chicago? Will Tomas and Marcus be battling an army of them? By the looks of that black-eyed “priest” at the retreat center (who gave Tomas creepy question suggestions), it sure seems that way.

These alterations are all well and good. Frankly, we’re a little less interested in an unending parade of demons than a single, ultra-crafty one — especially if the performance is even 1/10th as good as Blair’s — but it’s easy to understand how this choice generates more opportunities for the TV show. If it can find a way for this slow-burn opening to pay off with big-time frights down the line, perhaps Fox can actually realize the impossible.

This Article is related to: Television and tagged Fox, The Exorcist, TV Reviews