The season three premiere of the Fox comedy series reunited two of the most beloved co-stars in recent television history. 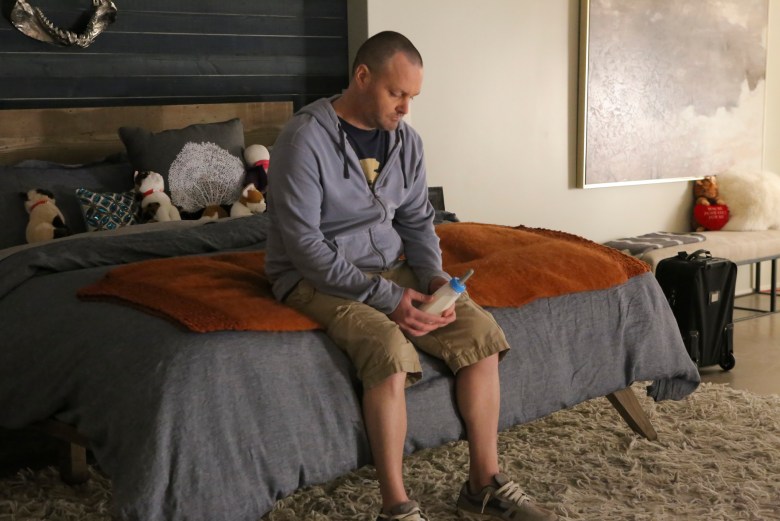 Will Forte in “The Last Man on Earth.”

[Warning: This post contains a spoiler about the premiere of “The Last Man on Earth.”]

Fans of the “The Last Man on Earth” were treated to an ever-so-brief “Mad Men” reunion Sunday during the Fox comedy series’ season three premiere. During the episode, Melissa (January Jones) shoots an intruder named Darrell who’s wearing a hazmat mask and suit, and when one of his colleagues takes off the mask, we see that Darrell is played by none other than Jones’ former “Mad Men” co-star Jon Hamm.

“We weren’t going to shoot you,” Hamm’s Darrell said. “We come in peace.”

And with that, Darrell dies and the surprise cameo is over almost before it began, resulting in one of the most underused guest appearances since the show killed off Will Ferrell literally seconds after he turned up in the series a year ago.

“The Last Man on Earth’s” Will Forte recently explained to EW how Hamm came to be involved with the season three premiere.

“It honestly had nothing to do with the ‘Mad Men’ connection,” Forte said. “He hosted SNL a couple times while [former SNL writer and current Last Man co-executive producer] John Solomon and I were there, and we were lucky enough to get some [sketches on the air] so we got to know him a little bit. Just over the years we’ve kept in touch. He’s always up for little things like this. I had my beard tested for bacteria last season [on “The Tonight Show”] so I asked him and Rachel Dratch to come out and be my friend who helped me through the results. So I called him up just to see if he had any interest. Hadn’t really even thought about the ‘Mad Men’ connection, oddly enough. He said it sounded like fun, and I told our writers and they said, ‘It’s so crazy that Betty’s going to shoot Don!’ and I was like, ‘Oh! That’s right! Oh s—!’ We were just so busy working on stuff, my brain is always at about half-mast.”

To watch the 45-second clip featuring Hamm, check out the video below.

READ MORE: Will Forte Wants to Be Sure That ‘The Last Man on Earth’ Will Always Keep You Guessing

This Article is related to: Television and tagged January Jones, The Last Man On Earth, Will Forte