Great chemistry and a subtle political undercurrent make Antoine Fuqua's remake of a remake feel like something new. 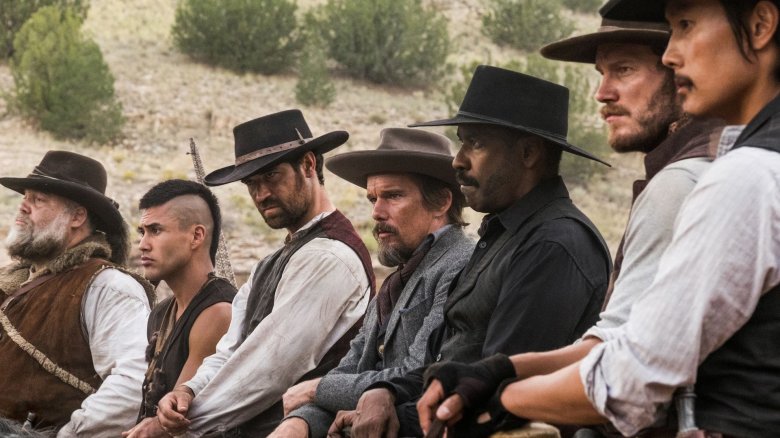 It would be hard to mess up a remake of “The Magnificent Seven,” but it might be even harder to remake it in a way that allows the premise of John Sturges’ iconic Western — itself a remake of Akira Kurosawa’s “Seven Samurai” — to feel newly relevant. Sturges’ film may be found wanting when compared to its monumental source material, but simply transplanting the action from 16th Century Japan to the Wild West gave it a life of its own.

This year’s version doesn’t have the benefit of such an obvious paradigm shift, in part because this year’s Hollywood wouldn’t dare make audiences work that hard. And yet, despite being directed by the singularly bland Antoine Fuqua (whose post-“Training Day” filmography could double as a list of the millennium’s most forgettable action movies) and co-written by suffocatingly dour “True Detective” mastermind Nic Pizzolatto, “The Magnificent Seven” 2016 is almost as fun as it is familiar. More surprising still, it’s as timely a blockbuster as they come.

The basic structure of the story hasn’t changed a bit: The year is 1879, and the frontier mining town of Rose Creek is being bled dry by a mustache-twirling robber baron named Bogue (Peter Sarsgaard, who enjoyably dusts off the same mad-eyed villain shtick he’s previously used in the “The Green Lantern”). Bogue is a sociopath, but most of all he is a capitalist — Rose Creek is essential to his business, and when its residents refuse to clear out, he sees them as standing in the way of God. So he does what any decent corporate raider would do: He guns down a few of the strongest men in town and gives the helpless locals three weeks to abandon the town they built with their own hands. The people agree to Bogue’s terms and peacefully surrender their land, the end.

Just kidding. This is AMERICA. Where systemic injustice and business-related bullying are never permitted without a fight! At least not in the movies.

And so this is where things get interesting. You know the people of Rose Creek are going to pool together their meager resources and hire a small group of (somewhere between six and eight) mercenary gunslingers to defend them, but — in this telling — a woman spearheads the effort. Emma Cullen (“Music & Lyrics” star Haley Bennett) never becomes as well-realized a character as the movie pretends she is, but her presence is an early hint that the film has a mind towards reinventing the Wild West in a way that reflects more contemporary social norms. Case in point: The first of the good-hearted guns for hire she finds is Denzel Washington.

Sadly, Denzel isn’t playing himself (his terse bounty hunter with a half-assed tragic past is named Sam Chisolm), but he might as well be — he’s charismatic, he speaks almost only in one-liners, and nobody ever mentions the fact that he’s black. Anyone who so much as shoots him a sideways glance is quickly silenced. In addition to Chris Pratt’s one-note trickster, Vincent D’Onofrio’s croak-voiced scalp collector, and Ethan Hawke’s traumatized Civil War vet (the beautifully named “Goodnight Robicheaux”), Chisolm is joined by a trio of non-white badasses.

First up is Manuel Garcia-Rulfo, playing a woefully underwritten Mexican outlaw who Chisolm lets off the hook in exchange for his help. Next is South Korean superstar Byung-hun Lee (“I Saw the Devil”), perfect as Robicheaux’s knife-throwing partner in carnage. Finally, the motley six become the magnificent seven when they cross paths with a deadly Comanche archer played by newcomer Martin Sensmeier. America’s disenfranchised are joining together to save the country from itself, fighting to defend a place they’ve been made to feel doesn’t belong to them — Donald Trump better hope this movie doesn’t catch on.

Of course, part of the fun is that Chisolm and his pals are reluctant warriors, each a little salty and fatalistic about the task for which they’ve been hired. Pizzolatto (who co-wrote the script with Richard Wenk), seems to have shed himself of the dour machismo that made the second season of “True Detective” such an atrocity. If anything, his first feature-length screenplay leans too hard on levity, prioritizing the ample chemistry between its leads over any real sense that these cowboys are in a battle for their lives. The inevitable pyrrhic victory has all the weight of a light summer breeze, though the bickering between Hawke and Lee is so enjoyable that most won’t mind.

Truly, “The Magnificent Seven” is a story of simple pleasures, and it gets the little things right. The skies are blue (not that muddy gray color you see in the revisionist Westerns), the score is prickly (“Ravenous” often comes to mind), and the shoot-outs — while infrequent — are enormous and staged with a more coherent sense of geography and progression that Fuqua has ever mustered before. For a movie that could have been a cheap photocopy of something that has already been done to death, this early fall surprise rides into multiplexes with the fresh sting of a new season.

If “Seven Samurai” and the first take on “The Magnificent Seven” were about the end of a way of life, this version points to a new beginning, one in which we can build positively on the shared past that we all carry together. As one of the Seven promises in a line typical of the film’s surprisingly pointed vision of the future: “What we lost in the fire we’ll find in the ashes.”

“The Magnificent Seven” premiered at the 2016 Toronto International Film Festival. It opens in theaters on September 23.

This Article is related to: Film and tagged Reviews, The Magnificent Seven, TIFF 2016