Fall TV Preview: Television isn't lacking for talent, but we're sure excited to see these 12 favorites — including Sarah Jessica Parker, Donald Glover and Hugh Laurie — back in our lives every week. 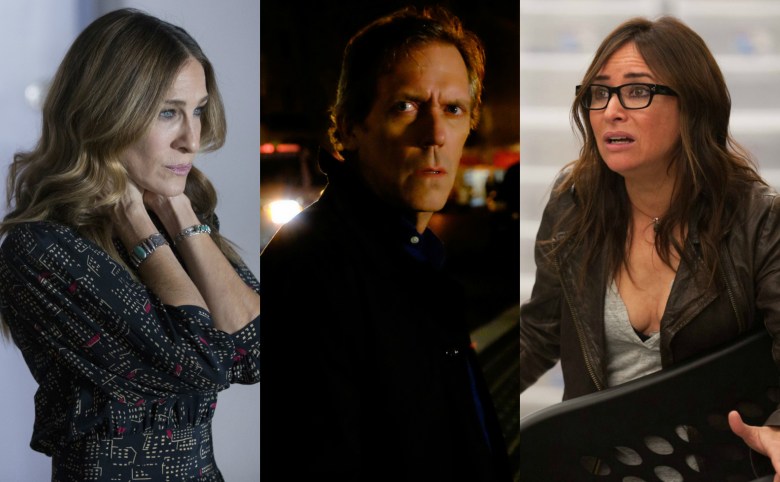 Compared to Adlon’s “Louie” character, the actress’ new role as single mom Sam is just as blunt and borderline provocative but far less intimidating. In fact, she’s kind of adorable in a painfully put-upon but unapologetic way. The semi-autobiographical story has us cringing alongside every embarrassing audition, parental freakout and unfair setback, and yet, Sam’s integrity and backhanded optimism is apparent in that she doesn’t give up, but instead copes (with vodka, but copes nonetheless). Sam is the promise of “Louie’s” Pamela fully realized. Bell came of age playing a girl sleuth on “Veronica Mars” and then pulled a 180 by embracing a truly adult role as the ruthless but complex Jeannie on Showtime’s “House of Lies.” While that was a nice detour, we’re happiest seeing Bell in silly, lighthearted fare. Fortunately, on “The Good Place” she stars as Eleanor, an unethical, selfish and rather useless human being who dies and accidentally takes the spot of a truly charitable person in the afterlife. Alongside her is mentor Michael, played by Ted Danson, who’s also back tackling straightforward comedy on broadcast TV after exiting “CSI” and the second season of “Fargo.” If the “Lethal Weapon” TCA panel was at all representative of the populace, then no one has seen Clayne Crawford in anything. Ever. Not one time. Of course, true TV devotees know that to be untrue, as Crawford left a massive mark on the addictively laid back “Rectify.” The SundanceTV original featured a number of A-list talents, but Crawford slowly broke out (fittingly so, given the series’ deliberate pacing) and started stealing scenes left and right. He’s a nuanced performer and easily the most exciting aspect of Fox’s TV adaptation. Most may not look at him and see Mel Gibson, but you better damn sure believe Crawford’s got some crazy in him. Previously, the Oscar winner was known as President Mackenzie Allen, the first woman president on the short-lived “Commander in Chief” and recently had a stint on “Grey’s Anatomy” as a tough but fair fetal surgeon. On “The Exorcist,” she continues her take-charge ways as Angela Rance, a woman who is strong in her faith and reaches out to her local priest Father Tomas Ortega (Alfonso Herrera) because she’s believes there is something evil in her house. Whether we like Angela or not is immaterial. What’s great is that Davis has the ability to sell a lady with strong convictions, and that’s essential for us to buy into this story for the run of a season. If she had faltered, we would have also. “Downton Abbey” has been over for a little while, but we still remember it fondly… Which is maybe why Michelle Dockery’s next big drama role is a complete 180 from her star-making work as Lady Mary Crawley. Struggling with addiction, poverty and some very bad decisions, Letty is a flawed, vulnerable creature upon which the entire “Good Behavior” pilot depends, and it’s a pleasure to see Dockery truly flaunt her range (not to mention her command of many accents). Whether you’re a big fan of ’90s independent film or you’re still mourning the loss of “The Riches” (or “About a Boy”), everyone should be happy to see Minnie Driver returning to TV. The British voice of Brooke Shields in “South Park: Bigger, Longer and Uncut” will be back in our lives again every week on “Speechless,” an ABC comedy about an L.A.-based family who rallies behind their family member with cerebral palsy. As the mother and proud advocate for her son, J.J. (Micah Fowler), Driver gets to flex her comedic and dramatic muscles in this promising new sitcom. You may know him as Troy Barnes, the overly-emotional co-host of “Troy and Abed in the Morning” on the NBC (and Yahoo) cult favorite, “Community.” You may know him as Childish Gambino, the brash rapper known for his confrontational style, valued commentary and incredibly fast rhymes. But you’ve never seen Donald Glover quite like this. In “Atlanta,” the writer, director, actor, rapper, producer and general artist portrays Earn, an unmarried father of one who tries to follow his dreams — and make some real money — after learning his cousin has started to break out on the rap scene in Atlanta. The 30-minute comedy steers far closer to dark humor than the giddy highs of “Community,” but it’s not nearly as fast-paced as Gambino’s songs. “Atlanta” emphasizes Glover’s range, and stands admirably on its own. But it could be just as valuable (if not more so) as Glover’s past roles. For eight seasons, Cheryl Hines played the lovely wife of noted sexpot Larry David on “Curb Your Enthusiasm,” but her newest on-screen relationship is even more unconventional. Her ex-husband Zorn (voiced by Jason Sudeikis) is certainly a beefcake, but he’s also an (animated) beefcake who’s completely out of place in the (live-action) modern world that Edie (Hines) lives in. Watching Edie cope with his renewed presence in her life drives a lot of the comedy in Fox’s new hybrid sitcom, and Hines has a particular talent for making the put-upon wife type likeable and fun. It can’t be easy acting with a cartoon, but Hines is up for the challenge. The doctor is technically back in, but with the upcoming Hulu series “Chance,” we’re a long way from the procedural world of the Fox drama “House.” Laurie plays Eldon Chance, a forensic psychiatrist grappling with complicated patients and some personal drama that’s unlocking the darker sides of his personality. The American accent is the same, but otherwise, it’s a very different role for an actor we’ve come to love watching over multiple seasons.

Sarah Jessica Parker has done quite well for herself in post-“Sex and the City” acting. From a slew of popular romantic comedies to well-reviewed features like “Smart People” and “The Family Stone,” Parker certainly didn’t need to return to HBO. But in today’s golden age of TV (which, many would argue, she’s partially responsible for), there’s plenty of great reasons to get back in the serialized game, especially for a show as challenging and engrossing as “Divorce.” As Frances, a mother of two who’s been married for more than a decade, Parker delves into the struggles and rewards of a long-term relationship. But Parker’s role in the new series (created by Sharon Horgan) goes beyond her performance onscreen, as the veteran producer also serves as EP (as she did on “Sex and the City”). This is far from “Sex and the City” territory, as “Divorce” leans into some tumultuous undertakings, but anyone who grew up with the adventures of Carrie Bradshaw 12 years ago should be excited to see the actress tackle an adult story. (And, not for nothing, “Divorce” also marks the return to TV for Thomas Haden Church in his first ongoing series since “Ned and Stacy” in 1997.) Jack Bauer may be gone from our televisions (if not our hearts), but we’re just as excited to meet the bespectacled, hoodie-wearing Tom Kirkman, a lowly Cabinet member who suddenly becomes President of the United States after an attack kills off the current president and all other officials in the line of succession. Although this series shares some DNA with “24,” we’ll find Sutherland is far less action-oriented (there’s no clock ticking here except for figuratively) and more vulnerable and strategic. Nevertheless, we aren’t fooled by the bumbling act for a second.

Milo Ventimiglia, “This Is Us” Yes, yes, you see Milo’s butt in his very first scene of “This is Us” — a line that he never crossed during his years on “Gilmore Girls” or “Heroes.” But while he built real fanbases on both those shows, neither of them demanded the gravitas that this new NBC drama asks. As a young father-to-be struggling with one of the toughest days of his life, “This Is Us” shows us a whole new side to Ventimiglia’s abilities as an actor. (That “whole new side” reference was unintentional, believe us.)