"Let it all go, this is the story. Write a story. Do whatever you have to." 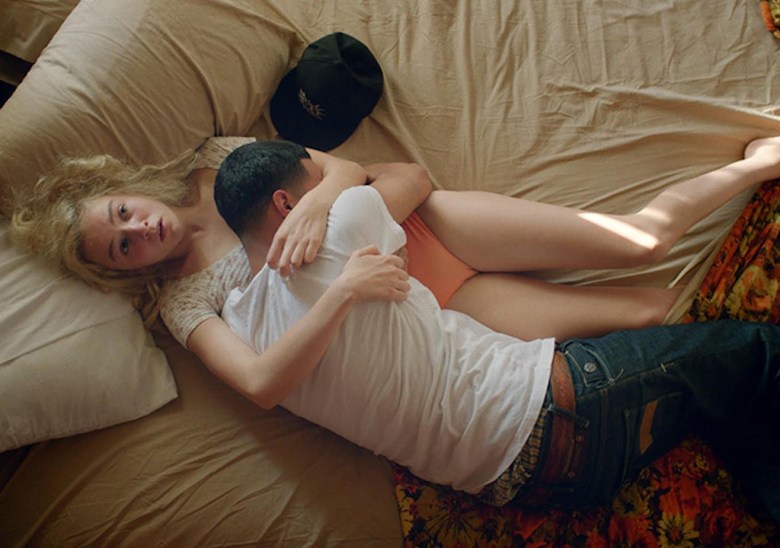 Girl Talk is a weekly look at women in film — past, present and future.

Wood is not boasting when she calls the film, which features former “Homeland” co-star Morgan Saylor as the eponymous white girl, crazy. The film follows Saylor’s Leah, mere weeks away from her starting her sophomore year at a New York City college, as she gleefully tumbles into the city’s underbelly, thanks to her newest obsession, sexy drug dealer Blue (Brian “Sene” Marc). Leah and Blue’s connection is instant and electric, and as the two fall deeper into their charged relationship, Leah begins to risk more and more.

“Real Life Stuff Is So Messy And Weird”

Like Wood, Leah goes gaga for excess, and while her initial encounters with Blue – including a number of pearl-clutching sex scenes, hefty drug use and plenty of lying to her parents – seem like the product of youthful energy and generally bad decision-making, when Blue is arrested, Leah goes to insane ends to get him out of jail. Wood went through a similar experience when she was a college student, but ultimately found freedom in making “White Girl” its own wild beast.

“It’s inspired by real experience, but the process of figuring out how to tell a story is so complicated and took me so many years,” Wood said. “That requires fictionalizing. That requires making things fit in this neat box and having a beginning, middle and end. Real life stuff is so messy and weird.”

Wood’s early drafts were epics, opuses, wild imaginings that would be difficult – if not impossible – to make on an indie budget with a newbie filmmaker at the helm.

Fortunately, Wood recognized that even she needed to dial back her big imagination to make “White Girl” work. And that’s when the film really opened itself to her. “As soon as I just said, ‘Let it all go, this is the story. Write a story. Do whatever you have to,'” Wood said that things became “much more manageable.”

That’s not to say that Wood wasn’t a bit proprietary about her script – and her story. “I find that the scariest moment for me in any project I work on is the first time you hand it over, and you have no idea what anyone’s reaction is going to be like,” she said. “You’re terrified. Then, you get the reactions and it numbs you to all the reactions after, and each time it would become further and further from my experience, and each time I feel more and more numb to this nakedness feeling.”

Wood also had to contend with some very early reactions that balked at the veracity of the story she put on the page.

“I wasn’t saying it was inspired by true stories at film school,” she laughed. “I had one film professor have a very negative reaction and was just basically telling me that none of it makes sense, it’s not real. One day, I burst out in class, like, ‘You don’t understand,’ then she was like, ‘Oh,’ and became much more helpful.”

A Pair Of Jerks, And The Right Girl

Still, Wood did share that she encountered a pair of “jerks” while hitting the meeting trail.

“One agent I met with was just a jerk because he was a jerk. It wasn’t because of my project. Maybe it was,” she laughed. “It was too small, it didn’t merit, and he wasn’t taking seriously the aspects of race. There was one investor who was just a fucking dick, but he was just a fucking dick. I think on my next project, if it’s a bigger scale, I’ll experience that more because I’ll be just begging wherever I can get it.”

Wood also got lucky when it came time to cast the project, one that hinges quite profoundly on what its lead actress can bring to the table. Leah is a complicated, rich character marked by seemingly paradoxical attributes – she’s smart but naïve, caring but fickle, wild but restrained – and Wood knew that she needed a very special actress for the role.

Enter Morgan Saylor, best known for her turn as Dana Brody on “Homeland,” an actual teenager willing and able to take on the kind of role that’s normally reserved for twentysomethings. “I think it’s amazing that she chose to do this, and hard for a young woman to find a complex role that can really show off what they can do,” Wood said. “I don’t think there’s a way that she can show off any more of what she can do. I just couldn’t actually believe when I met her and she was so perfect that she was actually this young and was willing to do it.”

Saylor’s performance is incredible, the kind of signature role that any actress would kill to have at any age. But “White Girl,” which so keenly upbraids white privilege while simultaneously layering on more easily digestible “bad behavior” – from partying to unprotected sex – also finds the humanity in the situation, most of it flowing right from Saylor. For Wood, that proved essential to making even the toughest bits of the film easier to ingest.

“Your reaction is going to be what it is. I think it’s a quite critical look at this character and privilege,” she explained. “People worry, ‘Will we like this person?’ I was never terribly worried about that, because I’m like, ‘I think you’ll empathize with someone who is young and out of control,’ and I know I’ll find an actress who can embody that and is doing this all with intelligence and good intentions, rather than just being some crazy coke slut.”

Saylor does all that, and more.

The more wild elements of the film made a big impression on early audiences, especially at Sundance, where the film premiered to more than a few gobsmacked audiences. Reviews out of the festival played up its more outrageous elements, and its daring poster includes an image of Saylor and Sene locked in an embrace that’s clearly meant to titillate, while large pull quotes blast words like “SHOCKING” and “SEXY.”

It might not be how Wood would want to market her film, but she understands the impulse.

“You have a small film. There’s people that have made serious investments in it. What can you do?,” she said. “Sure, on the poster, it’s talking about ‘Kids’ and ‘sexy’ and ‘shocking,’ and I’m like, ‘Can’t it just be the pretty picture?’ But I get it.”

She laughed: “They could say worse things, like ‘boring.'” Wood is hopeful that her audience will be able to understand the fraught and layered story “White Girl” tells and, perhaps more importantly, get that it’s not just a film about partying and out of control teens. As ever, Wood found the film’s real message when she pared it down to its most important elements.

“First of all, assume that the viewer is intelligent, because viewers are intelligent, and let them do the work,” Wood said. “Just show them the story.”

As for Wood’s own story, it’s moving forward quite quickly. And, in typical Wood fashion, it only promises more. Recent news stories have linked Wood to the upcoming production of “Captain Marvel,” and while she initially laughed when asked about the possibility of directing the project – “I saw that on IMDb. I was like, ‘Oh, really? Where’s my check, guys?'” – there certainly seem to have been some formal discussions about the feature.

“I don’t know what I’m allowed to say,” Wood said. “I’m not attached to the project. I’ve certainly talked about a lot of big projects like that, and to tell you, some of them seem interesting.”

For now, though, Wood remains focused on writing her own stuff.

“First, I just wanted to be a writer, and filmmaking came second, because it’s an impulse to tell my stories. I think that’s really my favorite part, just making the world and telling the stories,” she said. To me, it’s much more exciting. Directing and editing is just so exciting, but just full of terror. I love it, and I like scary experiences, but writing is my super chill place.”

And yet, that doesn’t preclude Wood from going the big blockbuster, mega-franchise route.

“I’d definitely like to direct someone else’s something some day, and I’d like if I did for it to be a crazy, big, insane thing and not the kind of shit I’d write,” she said. “Really, my dream is to write that kind of thing and make it. I can write a $150 million budget, no problem.”

She laughed, “That was the first version of ‘White Girl.’ I did that.”