The director and producer of the new documentary explain how they came to discover the real heroes of Syria's civil war. 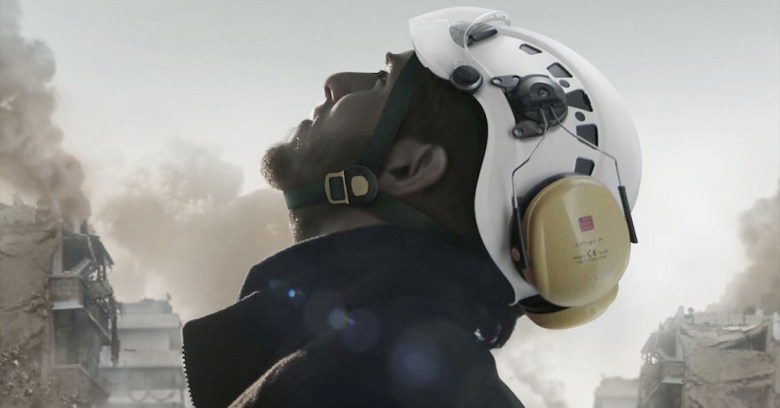 The following editorial was co-authored by the Oscar-nominated team behind “Virguna,” the director Orlando von Einsiedel and producer Joanna Natasegara, whose short documentary “The White Helmets” launches on Netflix globally today.

As the U.S, and Russia agree upon another tentative ceasefire in Syria, civilians on the ground are not holding their breath that the fighting will end. Syrian civilians have been let down far too many times. Instead, the Syrian people are continuing to do as they have done for the past few years, ­­taking humanitarian matters into their own hands to minimize loss of life.

The White Helmets, a group of nearly 3,000 civilian volunteer rescue workers, exemplify this spirit. These are the men and women who run into smoldering rubble, the aftermath of airstrikes, dig out the dead and injured. They come from all walks of life and have each pledged to save anyone in need, no matter their creed, religion or political beliefs.

We spent over five weeks on the Syrian border with 30 White Helmets training to save more people, capturing their day to day lives, experiencing war through their eyes. It was an experience that changed us; nothing could prepare us for the scale of the destruction and the daily trauma they were subjected to. We would question ourselves: How could they maintain any hope? Would we be as strong as them if put in their shoes?

Omran Daqneesh, the shell­-shocked and dust-covered child whose photograph made global headlines just two weeks ago, was saved by the White Helmets. He is just one of the more than 60,000 people they have on record as rescuing. Too many of them are women and children.

For the past three years, the White Helmets have quietly carried out their vital work. Whenever a news report has detailed yet another atrocity on a hospital or school that has been targeted by the Assad regime, or its ally Russia, the people in the background carrying victims from the rubble have invariably been White Helmets. Rarely have they been the subjects of the reports themselves. However, it seems that the world is finally beginning to recognize their extraordinary efforts with a nomination for this year’s Nobel Peace Prize and the endorsement of a range of high profile champions from Thandie Newton and George Clooney to Michelle Yeoh and Justin Timberlake.

We were stunned when we first saw footage of them in action: a grainy YouTube video as they rescued a newborn baby from under three stories of a collapsed building. Much of our work over the past few years has focused on telling the inspiring stories of people who have been willing to risk their own lives for something bigger than themselves. We have wanted to share these tales of bravery not only because they reaffirm our faith in the good of humanity in a world shaded by so much darkness, but also because they inspire us to work harder for what we believe in.

The White Helmets we filmed were a group of humble and highly committed individuals, undoubtedly damaged by years of witnessing the most horrific sights imaginable on a daily basis, somehow maintaining an unshakeable determination to continue their work. In the West, far too often we are subjected to negative stereotypes of the Muslim males. In stark contrast, these men were among the gentlest and kindest we had ever met. They maintain an almost unbelievable sense of humor in spite of everything ­­— tying our dozing cinematographer’s leg to water coolers or breaking into karaoke on our minibuses’ PA system. Their compassion seemed to be their overwhelming trait.

But the hardships these people endure every day are hard to imagine. Much of the powerful footage in the film comes from the cameras of the White Helmets themselves. Some footage looks like it was shot on the set of a Paul Greengrass movie: ­­jets tearing through the sky dropping indiscriminate bombs, while people cower in the streets and White Helmets run towards the explosions. The difference is that the footage is viscerally real, so much so that we could only show a tiny percentage of the horror these people witness, without making the whole film completely unwatchable.

It is this ever-present danger that makes being a White Helmet what The Washington Post has called “the most dangerous job in the world.” More than 140 White Helmets have been killed in the line of duty, leaving behind wives and families. Tragically, even during the production of our film, the White Helmet members we were following lost colleagues, friends and family with unbearable frequency.

Saying goodbye to the White Helmets at the end of filming was one of the more emotional moments of our careers, but their unified dedication to getting back to work was both moving and edifying. They believe each life matters and they’ll continue to work as long as there is need.

As the world holds out hope for peace in Syria, the White Helmets will continue to do their work of saving their friends, families and neighbors ­wholly embodying their motto: “To save a life is to save all of humanity.” Certainly for those of us fortunate to live in comfort and safety, we feel that their optimism and selflessness might just be the thing that saves us all from despair.

This Article is related to: Film and tagged Documentary, Features, Netflix, The White Helmets