Baseball and school bands and Tatum, oh my! 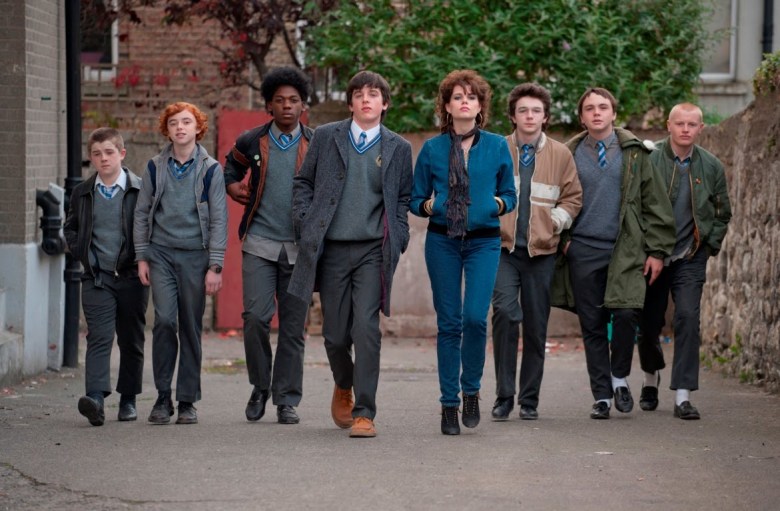 From the director of “Once” and “Begin Again” comes an unconventional musical movie set in Dublin, 1985. A boy navigating the perils of Catholic school finds solace in music, and the original songs (co-written by Carney) do what all songs in musicals should, but often fail, to do: Move the story forward while communicating something about the character. Though “Sing Street” did not garner as many awards as “Once,” it is a welcome addition to the contemporary movie musical canon, which Carney has done much to revitalize.

And so we’ve hit the home stretch for this year’s Halloween season. If your preferred method of celebration involves dressing up for the occasion, we came up with a handful of costume ideas inspired by the 2016 indie film world.

[NOTE: Because some of these costumes hinge on some late-film developments, a few spoilers for 2016 indie film releases follow.]

Jesse from “The Neon Demon” Costume Essentials: Metallic strapless dress, fake blood, face jewels, bright pink lipstick
Why It’s A Great Idea: Nicolas Winding Refn’s visually arresting horror film has the kind of symbolic lead character that Halloween costumes were made for. One of Elle Fanning’s signature looks combines the beauty of the haute couture runaways with the terror of “Carrie,” making for a look that is pretty much the embodiment of Refn’s film. Even for those who’ve never seen “The Neon Demon,” this costume is bound to turn some heads. – Zack Sharf Costume Essentials: Rumpled blue suit and tie, blank stare of death (erection optional)
Why It’s a Great Idea: Dressing up as the eponymous star of this year’s strangest indie sensation may not seem like the most fun idea — there’s not much to the costume beyond a dirtied suit and a lifeless expression — but spending All Hallows’ Eve as an explosively flatulent corpse has its upside: you can fart all night and blame it on your character. And as if that weren’t enough of a selling point, Manny also makes for a great couples or buddies costume if you know someone who’s willing to follow you around and hum the “Jurassic Park” theme. Just avoid beach parties at which anyone might mistake you for a seaworthy vehicle and you should be fine. — David Ehrlich Costume Essentials: Irish schoolboy attire with ‘80s pop music looks: big blazers, teased hair and eyeliner
Why It’s a Great Idea: It’s versatile for various-sized groups and styles. You can go all the way schoolboy (don’t forget the rebellious brown shoes!), the bad Village People mishmash of costumes, the Cure-inspired Goth look, or androgynous. While everybody and their mothers are going to dress as the Suicide Squad or Trump or Hillary, wouldn’t it be nice to channel something nostalgic that’s positive and aspirational? – Hanh Nguyen Costume Essentials: Technically, this costume could not be easier — there are a hundred different generic variations on the classic cat costume out there — but you’re going to want an orange tabby set of cat ears and tail, in order to physically capture the look of politician Anthony Weiner’s pet kitty. You’re also going to want to find your own inner frustration and rage, in order to properly capture the cat-like distain this famous pet demonstrates during its screen time in Josh Kriegman and Elyse Steinberg’s documentary.
Why It’s a Great Idea: It was IndieWire’s own Kate Erbland who first highlighted the brilliance of this silent commentator on Weiner’s ongoing scandals — the silent long-haired cat, perched next to Weiner on the couch during the most brutal of his meetings with staff, captures everyone’s frustration with the politician. Sometimes, the best costumes are the most subtle. — Liz Shannon Miller

Hotel Guests from “The Lobster” Costume Essentials: generic dark blue blazer, white dress shirt, muted blue striped tie; light blue blouse, sunglasses, black heels (handle optional steak knife with care)
Why It’s a Great Idea: Sure, someone may mistake you for a branch manager or a flight attendant, but in this case, it’s OK to have to explain your costume. What better way to celebrate society-mandated dress-up than with a tip of the cap to society-mandated partnership? Sure, you’ll be the polar opposite of the life of the party, but if you find someone content to observe the evening’s festivities from a quiet place in the corner, maybe you’re meant for each other.  (For bonus points, bring some headphones for a silent, private dance party.) – Steve Greene

Doris from “Hello, My Name is Doris” Sally Field in “Hello My Name is Doris”

Costume Essentials: Colorful scarf tied into giant bow, “quirky” reading glasses, costume jewelry, colorful tights, mismatched prints.
Why It’s a Great Idea: Play your cards right, and this is an outfit you can 100% cook up from the contents of your own closet (with a potential reading glass purchase, should you be naturally blessed with good eyesight), a get-up that takes most of the worry out of putting together a costume at the last minute. There’s also the added plus of being able to tell admirers that you’re emulating Sally Field – you like her, you really like her – in one of her recent roles, as a nattily dressed worker bee who falls head over heels for a much younger man. For Field’s Doris, so much of her vivid personality and cherry attitude is expressed through her outfits, so why not celebrate her in the most adorably fitting (couldn’t help it) way possible? – Kate Erbland

McReynolds or Finnegan from “Everybody Wants Some!!” Costume Essentials: Vintage cut-off football jersey or baseball practice tee, athletic shorts or pants, shaggy hair with mustache and sideburns, Aviator sunglasses, baseball mitt or empty beer bottle (Lone Star or Schlitz), up for whatever attitude.
Why It’s a Great Idea: Richard Linklater’s 1980s college athlete comedy is about partying as much as any movie in recent history, and takes place in the back-to-school season. Despite the full-on jock attire, individuals should feel free to indulge their sensitive and/or philosophical side at any moment. – Graham Winfrey

Black Phillip from “The Witch” Costume Essentials: Horns, ears and a goatee, book for people to sign away their souls
Why It’s a Great Idea: Besides the fact that dressing like a goat can be cool/scary/sexy (think of those satyrs!) this would be a great costume to pair with anyone dressed as a Puritan. Or better yet, Puritan twins cavorting around you. And if you want to score some digits, all you have to do is sidle up, whisper, “Wouldst thou like to live deliciously?” and then hand them your book. Greatest. Of. All. Time. – Hanh Nguyen

The Mag Crew from “American Honey” Costume Essentials: Tank tops, gym shorts or skinny jeans, baseball hats, boots, backpack, order notebook, Red Bull. (Optional: fake tattoos.)
Why It’s a Great Idea: Looking to pull together an easy and timely group costume? Why not go as the magazine crew – mag crew, please – from Andrea Arnold’s “American Honey,” a hard-partying, always-changing, and super-tight group seemingly made for holiday celebration. Consider this one another optimal, pull-from-the-closet affair, bolstered by battered, wrinkled, dirty clothes that could feasibly have clothed a restless youngster who spends hours and hours riding around the country in a crammed van. Bonus: So much of Arnold’s film lives and dies by the feature’s banging soundtrack, which means any group who attempt some mag crew action have a built-in playlist to take with them wherever they go to party (bonfires not encouraged). – Kate Erbland Costume Essentials: Long brown wig, vampire teeth, no sense of shame.
Why It’s a Great Idea: Maren Ade’s beloved Cannes comedy may not open in theaters until Christmas, but now is the time to strike — by next Halloween, everyone on your block is going to be walking around with plastic fangs, a pair of handcuffs, and a mortified daughter. The props, of course, are only a small part of the equation, as dressing up as the endearingly impish Toni Erdmann is all about attitude and an insatiable desire to embarrass your loved ones. And for really dedicated cinephiles out there who want to go the extra mile, why not seek out Toni’s oblong Chewbacca costume and really put the rest of your Halloween party to shame? — David Ehrlich Costume Essentials: Pick an ensemble! There’s turtleneck-and-trenchcoat Burt Gurney, with his briefcase and nefarious plans. But your better bet is white sailor suit Burt, especially if you have some softshoe moves in your back pocket.
Why It’s a Great Idea: The beauty of emulating Burt Gurney as portrayed by Mr. Tatum is that it’s relatively low maintenance. But by doing so, you’re able to highlight one of 2016’s most under-appreciated performances — one that serves as an important reminder that every day which passes without Channing Tatum headlining a classic Hollywood movie musical is a day that’s a little darker and sadder. — Liz Shannon Miller