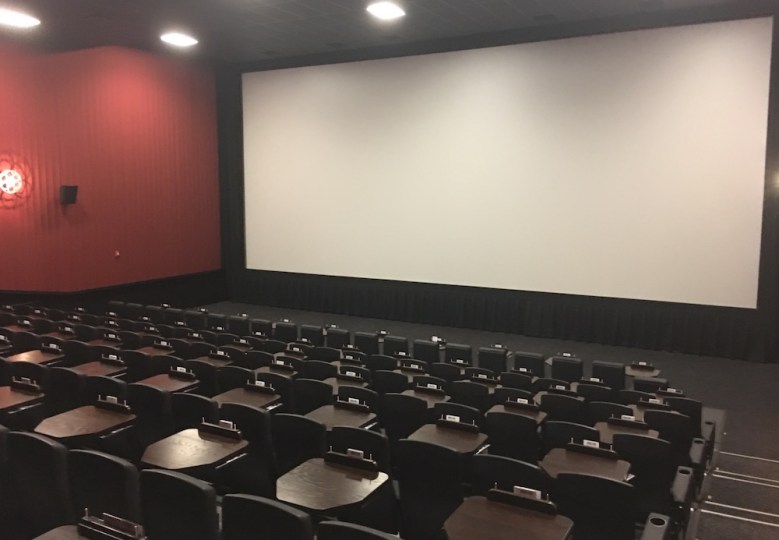 The Alamo Drafthouse in Downtown Brooklyn

It’s been a long time coming, but Brooklyn’s Alamo Drafthouse finally opens for business on October 28. On Monday, IndieWire got a sneak peek of the new dine-in cinema, whose opening was originally scheduled for this past summer before being delayed due to a fire alarm control panel that exploded. Everything about the new location, from the gourmet culinary offerings to the diverse programming, suggest that the Austin, Texas-based chain’s first New York City venue is going to be a big hit with moviegoers.

READ MORE: iPic’s Big Gamble: How a High-End Theater Chain Hopes to Change the Way We Go to the Movies

The 25th Alamo Drafthouse to open since the company’s founding in 1997, the Downtown Brooklyn location has seven screens with in-theater food and beverage waiter service. The cinema’s mix of studio movies, independent films and repertory titles can’t be found under the same roof at other theater of this size in New York. Upcoming new releases include blockbusters like “Rogue One: A Star Wars Story” and Marvel’s “Dr. Strange” but also indies like Andrea Arnold’s Cannes Jury Prize winner “American Honey” and Chan-wook Park’s “The Handmaiden.” Repertory screenings like “Suburbia” and “Heavenly Creatures” will complement the first-run programming.

At any given time, the theater’s program will include six new releases, some of which will be studio films, plus a combination of art house films and repertory titles. Some of the long-running Alamo series that will be coming to Brooklyn include Video Vortex, which shows movies made exclusively for VHS, Terror Tuesday, and Weird Wednesday.

While dine-in theaters like Nitehawk and iPic may have beat Alamo to the punch in New York City, Alamo founder Tim League says the company’s unique approach to expansion is one of the things that sets it apart from the competition. “We started out as a mom and pop single-screen theater many many, years ago, and we tried to keep those sensibilities in a lot of ways,” League said during a theater tour on Monday. “The way we do it is, we hire key people that are local, we train everybody down in Austin and then we bring them back up here to create as we see fit.” Alamo’s Executive chef Fernando Marulanda previously worked for Danny Meyer’s Blue Smoke and at Tavern on the Green, and created the original menu from scratch specifically for the new venue. Some of the items include updates on classic street fare, like Cuban-style ropa vieja beef tacos and spicy jerk chicken sandwiches with coconut lime dressing. “The only thing that’s consistent [across theaters] with the food menu is the queso,” League said. “Everything else is new and it comes from Fernando.”

There’s also a standalone bar/museum called the House of Wax that offers 15 signature cocktails and 39 draft beers on tap, all from New York State. Named for its 19th century wax figures, the House of Wax also has its own stage that will be used for vaudeville acts, karaoke competitions and special events. While some features of the new venue can be found in many other Alamo Drafthouse locations, like the carpeting that comes directly from Stanley Kubrick’s “The Shining,” no other Alamo Drafthouse has a House of Wax, and founder Tim League made it clear the concept would not be replicated in any future location.

The Alamo Drafthouse is also known for its strict no-talking and no-texting policy, and even shot a new PSA on its rules starring Janeane Garofalo that will screen before movies. Audience members can report disturbances on the same cards used for ordering food. “For anyone who’s talking or texting, you don’t have to feel like a snitch,” said Senior Marketing Manager Sampson said. “You can just write it on the card and a manager will come take care of it discreetly.”

Located at 445 Albee Square West near the Atlantic Avenue terminal in Brooklyn, the cinema occupies the fourth and fifth floors in the new City Point complex. The theater has a total of 796 seats and vary in size from 188 seats to 94 seats. Regular admission tickets are $14.50, with some repertory screenings charging slightly less.

This Article is related to: Film and tagged Alamo Drafthouse, Rogue One: A Star Wars Story, Tim League