The prolific showrunner spoke with Paul Scheer at the WGA about his successes since "Lost." 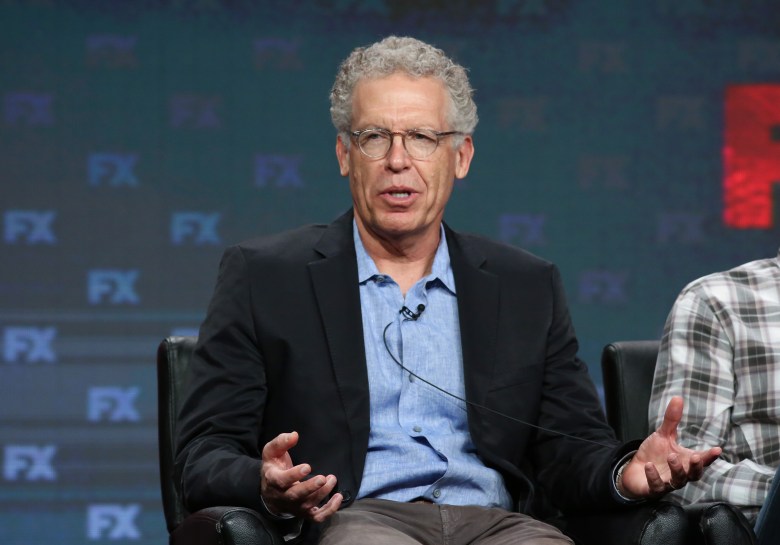 Carlton Cuse is a busy man. He recently signed a deal with Amazon Studios for ten episodes of his new “Jack Ryan” series, an action packed spy thriller written originally by famous writer of espionage Tom Clancy. And the new series is one of four shows backed by Cuse as an executive producer, which also include “Bates Motel,” “Colony” and “The Strain.” With his experience and almost supernatural ability to juggle a hectic workload (although he admits he has some leeway, as he was able to set up all of his production offices along the Ventura Blvd corridor), the Writers Guild asked him to explain his approach to writing and collaboration, and how to be an effective showrunner.

Here are some of his tips for writers and showrunners alike.

Cuse says when “Lost” finished, one of the executives at ABC gave Cuse and Damon Lindelof a letter from George Lucas that basically said “Here’s the secret about ‘Star Wars’ — I was sort of making it up as I was going along too.” It was one of his favorite gifts, and it solidified what Cuse believed: With stories, Cuse says, you have a planned “architecture,” but as the story progresses, things change, and different choices are made that deviate from the original plans.

For example, when “Lost” introduced Nikki and Paolo, they though the idea to bring some of the other unmentioned people on the beach into the forefront was an exciting concept, but they immediately realized it was a horrible mistake. There were “like 16 other characters everyone wanted to see,” Cuse said, and realizing Nikki and Paolo were unnecessary, they quickly “buried them alive” — to the delight of many fans.

Trust in Your Relationships Courtesy of the Writers Guild Foundation

Writer and actor Paul Scheer moderated the panel, and during the talk would bring out a stack of index cards, some of which contained quotes from Cuse’s past collaborators. Seeing the cards, Cuse worried their talk would become “more like a roast,” but the quotes were purely appreciative commentary by some of Cuse’s past collaborations. All of whom, Paul stated, had the same thing to say about Cuse’s approach to collaboration: “You trust people.”

Kerry Ehrin, co- creator of “Bates Motel,” had told Scheer that she and Cuse were like “chocolate and peanut butter.” “She doesn’t know which she is, but she hopes she’s the peanut butter,” Scheer quoted.

For the most part, Cuse tries to give everyone in his writing room the opportunity to contribute. He even takes producer notes into consideration, although he believes Nora Ephron’s words of wisdom to “never take a note from someone who doesn’t like your script.” In relaying this, he told an anecdote about a producer who gave him horrible notes on a show, only to rediscover the producer in Ohio at an airport, no longer in showbiz, and selling insurance.

READ MORE: Do You Want To Go Back To The Island? Carlton Cuse Thinks The Return Of ‘Lost’ Is “Inevitable” One of Cuse’s favorite scenes is from “Apocalypse Now,” when Robert Duvall, in the middle of gunfire, takes off his shirt and yells at his subordinates to surf. For Cuse, it is reminiscent of an idea he’s fashioned from years of experience: whatever will happen will happen.

Scheer noted that Cuse’s calm demeanor in the midst of chaos seemed to be a part of his success as a showrunner.  When asked about Cuse, Ryan Condal, co-creator of USA’s sci-fi drama “Colony,” told Scheer that Cuse is  “…the Phil Jackson of show runners,” with a zen-like approach to all of his shows.

Cuse said he learned very early that anxiety never helps. His first time as a showrunner was on the show “The Adventures of Brisco County, Jr.” running 27 episodes on a seven-day schedule in one season. One of the writers, after hearing of additional episodes on top of their already hectic load, quit, and Cuse was left to work on episode 16 with a team of writers under a tight deadline. He didn’t have an opportunity to stamp his signature on the writing (he simply didn’t have the time) but the episode turned out well regardless.

It was the first time he realized he didn’t need to wield total control to have an effective show, and that it’s better sometimes to let go of what some writers deem “precious.”

Another Tip for Writers – Be Unique Rupert Penry-Jones in “The Strain.”

The best thing for any new writer, according to Cuse, is to bring something unique to the writers’ room. Problem solving a narrative is best when everyone has something different to contribute.

On “Lost,” writer Christina Kim told stories about her family unique to the relationship between Sun and Jin. On “The Strain,” an avid comic book collector brought a specific kind of knowledge about the genre.

“It’s kind of like assembling ‘The Avengers,’” said Scheer. “You find what you need for the show to tackle its storytelling issues.”

This Article is related to: Television and tagged Carlton Cuse, Jack Ryan, WGA