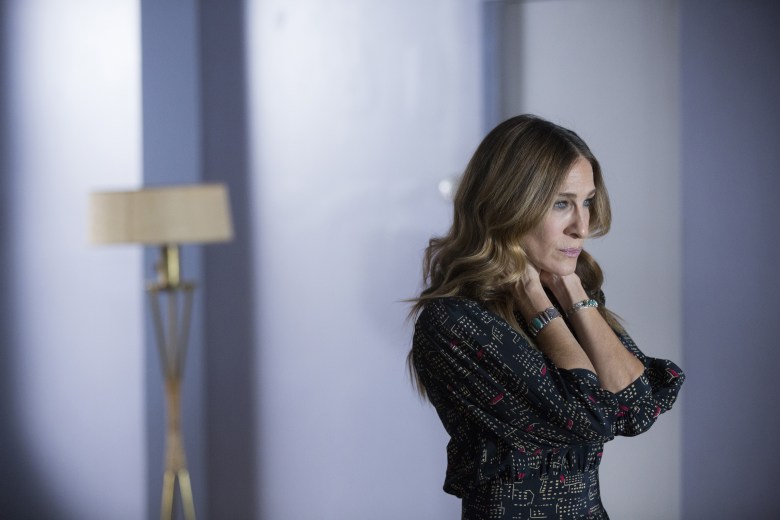 “How do you go from eight years of happy marriage to wanting to blow someone’s head off?”

As stated by Sarah Jessica Parker, the above line sounds very much like something Carrie Bradshaw might have used as a thesis for one of her weekly columns. Sitting at her desk, overlooking the streets of New York and thinking out loud via voice-over narration, the columnist may have mused on the above question until a passing life experience — say, a new boyfriend who’s not over his ex-wife — provided all she needed to finish her article. But Parker isn’t playing Bradshaw when she says it, nor is “Divorce” otherwise similar to “Sex and the City.”

READ MORE: Sarah Jessica Parker: How TV Has Changed From ‘Sex and the City’ to ‘Divorce’

The new black comedy from Sharon Horgan (“Catastrophe”)  takes the question very seriously and dwells on the answer for a long, long time; often to uncomfortable, honest and uncomfortably honest extremes.

Like the person at the party who breaks an awkward silence with an insightfully candid remark, “Divorce” feels like it’s exposing the inner workings of one of life’s most common romantic experiences. Horgan, showrunner Paul Simms and Parker, who’s shepherded the project as a producer for four years, have built a self-deprecating “War of the Roses” in which the central couple is forced to deal with reality — kids, finances, friends and family — instead of taking loud, repeated pot shots until they both die from blood loss. To say it’s educational would undercut its emotional impact, but to say it’s deeply personal could betray the story’s universality. Of course, it would be a lot easier to stomach if the latter was ignored, but “Divorce” simply has more to unpack than can be summed up in a singularly strong concept. It’s the overall experience that hits hardest, and while delving into heartbreak may not be something we’re all eager to become immersed in, the series’ value on levels both informational and artistic is hard to deny.

Parker plays Frances, a successful headhunter (a.k.a. “executive recruiter”) and proud mother of two whilst being unhappily married to Robert (Thomas Haden Church). A bit of a buffoon, Robert seems about as particularly enthralled with his wife as she is with him, but the husband remains more haplessly content in his ho-hum existence. Frances, however, wants more. She wants to open an art gallery to expose her suburban New York neighborhood to more challenging, expressive culture. She wants to feel how she felt about Robert when they were truly in love. She wants better sex and more of it. She wants “to save my life while I still care about it.”

Robert wants…her. Why, exactly, may not be entirely clear, but his loyalty is admirable — like a dog, which literally enters the picture in Episode 2. Of course, neither realize the width of the gap growing between them until one fateful night at a dinner party. Without getting into specifics, the pilot beautifully sets up a dynamic in which our leads learn as much about themselves from forced self-reflection as they do from casually observing their friends. Molly Shannon’s Diane is married to Nick, played by Tracy Letts (“Homeland”/a Pulitzer Prize winning playwright), and the couple comprise Frances and Robert’s closest friends.

Neither are perfect — Diane vapidly self-centered, Nick bluntly egotistical — and it’s in their flaws the core couple learn what they value in a partner. Different scenarios may drive them closer together or farther apart, but watching Frances and Robert spin further and further into isolation feels as frightening as a real break-up — especially when they literally have no one to turn to.

If all this makes you pause when “Divorce” is casually labeled a comedy, it should. Though, oddly enough, the jokes felt far funnier (and more frequent) on a second viewing, watching “Divorce” must come awfully close to going through one. Yet there’s value in being exonerated from the pain and turmoil while still experiencing the emotions vicariously. So much of what Frances and Robert go through feels like a surprise to them, even if they thought they generally understood what they were in for. Audiences should take note, without fearing to laugh when a well-timed moment of candor breaks the awkward silence.

Stay on top of the latest TV and film news! Sign up for our e-mail newsletters here.